This episode starts off as the last one ended, with Ben (Dylan McDermott) and Vivien (Connie Britton) returning from the hospital. While they can’t seem to find Violet (Taissa Farmiga) – who is out on her date with Tate (Evan Peters), finally letting himself be seen outside of the Murder House – all of a sudden the living dead Hayden (Kate Mara) shows up again, bleeding, dirty on the front porch.
So I love how Ben is being driven completely mad. He’s spiralling further down a dark and dreary rabbit hole. While Hayden has risen from the dead, Vivien mentions they need to talk about Ben moving out of the house. He doesn’t want to, of course, but Vivien seems as if she’s fed up completely with his shit. Rightfully so, I mean, the man is messed up beyond repair, as far as I can tell. Either way, that damaged family dynamic pushes farther in “Halloween: Part 2”, putting more intense pressure on Ben as his issues literally rise up from the grave.

Larry Harvey (Denis O’Hare) is back pestering Ben Harmon. He obviously knows tons more about the house than he lets on. He’s alive, but still in league with the ghosts and demons in the Murder House, at least in some manner. What I enjoy so much about Larry’s character, and the subplot involving him, is that we’re not able to tell exactly what his deal is early on. There are some aspects I can get a grasp on, slightly anyways. In opposition, I feel as if Larry’s angle keeps me on my toes. I love seeing how the suspense between Ben and Larry plays out with each passing episode.
With the newly secure premises of Murder House, the Harmons have a guard keeping close watch on them – Luke (Morris Chestnut). The house seems to be inviting further trouble, the misguided jealousy of Ben, as an alarm goes off drawing Luke to the Harmon door. Already we can see this will become a sticking point for Ben.
The relationship between Violet (Farmiga) and Tate (Peters) deepens now with their date on Halloween night – the night we’ve been told already when spirits can walk freely. As they relax on the beach, a bunch of kids with bloody bits all over them, gory-looking supposed costumes accost Tate. They say they’ve been looking for him, that he has finally shown his face.
So it’s all but confirmed in this episode: Tate is a ghost. He never leaves the house because he’s stuck there, a part of its fabric like the very wood and paint and carpet inside. Except on Halloween, he can go out. You can just tell even seeing him jump around, prancing, enjoying himself, Tate is SO HAPPY to be outside of the Murder House. Harkening back to Tate’s dream from the Pilot, we’re seeing his story come out now; the high school kids confronting Tate are all shot to pieces, much like what he imagined himself doing in the dream he described to Harmon. It’s pretty much obvious what is happening in this episode, however, I like that the writing doesn’t spell every last bit of information out excruciatingly with expository dialogue that aches the brain; as so many other shows often do. Instead, the info comes to us but mostly through slight remarks, the characters, and how we as the audience piece together all those puzzle pieces scattering around, episode after episode. 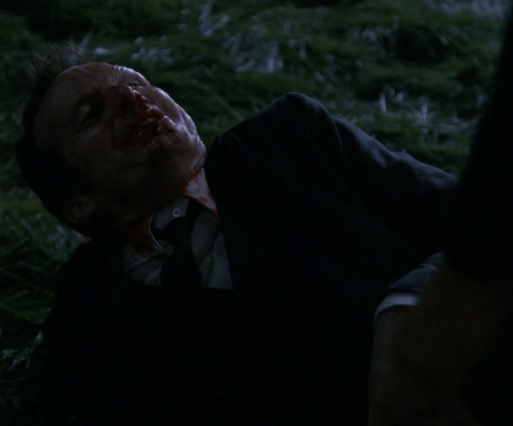 The Ben-Hayden subplot keeps on coming hard. Vivien receives a phone call from apparently dead Hayden; a call of pure sass. Then, Ben meets dead Hayden in the basement where she chastises him, spits up blood and bits of teeth, as she’s rotting from the inside; being dead and all. It’s such a sickly intense scene.
Even further, we’re getting more of an idea about Larry’s connection to the ghosts. He pleads with a dead Hayden to let him help her take care of things, more specifically of Vivien. Larry says it’s been too long since he used his lighter. Naughty, naughty.
Ghosts are just pouring down onto Murder House. Chad (Zachary Quinto) shows up again – he trashes the decorations and pumpkins on the porch. He screams at Vivien to get out of the house, that it isn’t hers. Simultaneously, in the bathtub upstairs Hayden seems to be having a nice, steamy bath. It’s like Vivien is wedged between ghosts, unable to escape them both inside and outside.
Which leads us to fully understand that it’s the property itself, not just the physical house, holding all the supernatural entities swarming around the Harmons.
But on Halloween, it does not matter. Everywhere is fair game for spirits. This leads all those highschoolers who taunted Tate on the beach earlier up to the doors of Murder House, calling for Tate to come outside and confront them further.
Now, as everything else is tumbling down, Vivien finally discovers Hayden’s pregnancy, Ben lying even more. Not to mention that Hayden find out about Vivien and her pregnancy. What an awfully twisted moment. Such nasty business! I love how it’s part supernatural horror and part real/dark family drama. There’s a hundred things going on, yet it isn’t clogging up the story with too many subplots. Because everything comes back into play, one way or another. This show goes for the long game, it doesn’t try and throw everything together at once. Some of the ghosts play a part in making things worse, others play different roles. It’s fun to watch everything weave into a bloody, savage, and eerie tapestry of ghosts, murder, infidelity, and horror movie homage.

At the end of the episode, Constance reveals Tate is her son, to Violet; she also asks Violet to promise not to tell Tate his sister Addie has now died. He is clearly a trouble boy who cannot handle the harshness of the world, as we’re slowly seeing by discovering he most certainly committed a high school shooting. It’s incredible, we’re getting more amazing depth to the character of Constance, as well as Tate. Mostly I’m drawn to Constance who is riddled with tons and tons of emotion, so much nuance.
AGAIN THE HORROR MOVIE MUSIC REIGNS!
Bernard Herrmann’s work is back on deck again. This time, it’s a piece from 1968 and the cult film Twisted Nerve. What a classic bit! Excellent movie to reference. Again, proving Ryan Murphy is a horror fan, as well as the others involved in working on the show. Most people will probably recognize the tune from being hummed by Daryl Hannah in Kill Bill, but that’s another testament to the cinephilia of Quentin Tarantino, that awesome bastard. It actually comes from this cult horror, an unsettling little film; if you’ve not seen Twisted Nerve, do so as soon as possible.
This comes as Tate is being confronted by the high school kids, the obviously DEAD ones, and we’re finally, officially, figuring out what Tate has done while alive. Tough and tense scene, very dark. Dig it!
Final few minutes or so are perfect. The ghosts all wander back, after a successful night allowed out on Halloween, towards the Murder House. Each of them lamenting their lives as spirits, made to stick to the house like honey. Solid scenes to end off the two-parter “Halloween.” Also, it plays into how Ben sort of drags himself back home; he’s like the walking dead himself, slowly moving back there to Vivien, as if the both of them stick to their marriage in the exact way the ghosts stick to the Murder House. Nice juxtaposition to finish this off.

Next episode is “Piggy Piggy”, an excellent part to the first season. It’s directed by Michael Uppendahl, whose other work includes Ray Donovan, Shameless, Mad Men, and many other shows.