As a fan of Mary Shelley’s groundbreaking novel Frankenstein, the various adaptations throughout the years, as well as stories giving homage to the original while taking liberties with its thematic elements, are always of interest to me. Then there’s Paul McGuigan who was announced to direct this film, which grabbed my attention. I love several of his movies, most of all Gangster No. 1 and the underrated Willem Dafoe-starred The Reckoning, so to imagine him doing some sort of retelling of this science fiction/horror classic seemed exciting. However, in comes Max Landis. He’s a guy many enjoy hating, but I don’t, I never enjoy disliking anybody. It isn’t because of his attitude so much as it’s a disdain for his narcissism in light of his abilities as a writer. He constantly blames studios and anyone else other than himself for the failure of the films he writes to make big box office numbers. His screenplays are often cliche-ridden, though, somehow he insists on being this original thinker of some sort. To be honest, Chronicle and Deer Woman (a short for Masters of Horror directed by his father John Landis) are the only things of his I’ve felt were actually top notch – the former an awesome subversion of the superhero genre, the latter a hilarious take on horror and folklore mixed into one. Unfortunately, the writing in Victor Frankenstein is no better, and it is one of the biggest problems of the film. With a creepy monster that is certainly unique in its own right, a couple good performances (most of all Daniel Radcliffe), this could’ve been a retelling that worked. Only the writing drags this down to a barely mediocre romp through beat down territory, masquerading as if it’s something better.

The look of the film is certainly dark and full of wonder. McGuigan and D.P. Fabian Wagner certainly capture a gritty aesthetic, which helps a great deal. If this looked like any other period piece I wouldn’t have much to enjoy. Particularly, I love some of the gruesome imagery when Victor and Igor are first trying to bring things back to life. The monkey thing they manage to resurrect, then have trouble with, is downright terrifying! Dig it, so hard. Even the body parts Igor works on, as Victor brings them to him “piecemeal”, are nasty and hideous to look at. These elements really take us to the time, like sitting in on the early days of modern technique in medicine. Overall, though, it’s the dreary and bleak aesthetic, the creepy atmosphere and dreadful tone which makes the look and feel of Victor Frankenstein the best part of this whole experience. Lots of nice looking visuals, on the opposite end of the spectrum there are all the shadowy and also disturbing scenes/shots. These two opposing elements make the film great to look at. The sound design and the score are also well worth their work, I really liked the music – favourite part is the piece playing when Igor finds Victor in the massive lab working on resurrecting his Prometheus; lots of good horns, of which I’m a fan. 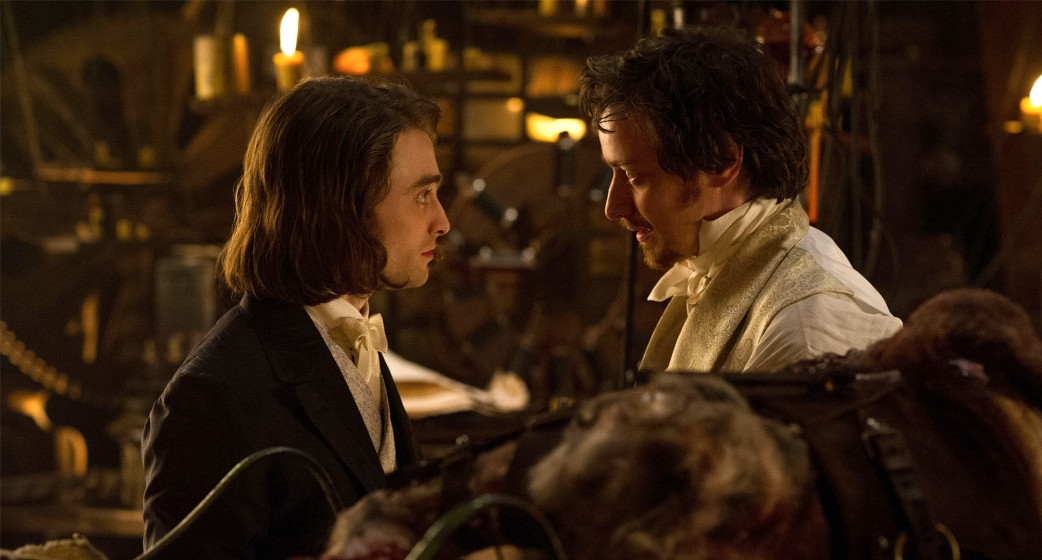 Max Landis can harp on all he wants about this movie not succeeding as well as planned. Ultimately, his supposed knack for writing eludes me. I was a huge fan of Chronicle, still am. Other than that I’m not exactly sure why anybody thinks he’s anything special. Not trying to rag on the guy. I’m a published author in the short story realm, I know it isn’t easy. But he simply can’t take any criticism, or else you’re labeled someone who “doesn’t get it”, or whatever. Case and point re: his poor writing, some of the quips Victor makes throughout the film are impressively lame. Such as the whole “It‘s alive” scene when the success arrives. I get it, Landis tries to be oh-so-clever and subvert a well-known scene concerning Frankenstein. It simply doesn’t fly, it is lame and he can do better than that. Another thing I don’t like is the tone. At times there’s a playfulness which detracts from all the darkness; the dark I love, Landis pulls out the grittiness of the period, especially all the horrors of burgeoning medical practices (think: draining of abscess). I’m not opposed to comedy. There’s a time and a place for it, and Landis forgets each of those things.
In many parts, Victor Frankenstein is a fun amalgamation of Mary Shelley’s original novel, as well as both the 1931 film Frankenstein and its 1935 sequel The Bride of Frankenstein. The reason it falls short is because there are too many reaching qualities that never get where they intend to go. First, there’s the heavy handed in vitro fertilization remark Landis tosses in, as if Victor is some champion of women. Only that’s just a one-off bit of dialogue for Victor to spout instead of it playing further into his advances in modern medicine (maybe Landis is trying to boost his credibility with women; who knows). The screenplay could’ve done something with this bit, instead it comes out to make Victor look crude instead of it being a testament to his visionary qualities. Second reason for this movie’s failure to be what it ought to – another movie that has an artificial, manufactured love story tossed into the middle of it. While the Kenneth Branagh directed Frankenstein did have a love interest that part of the story helped to further the torment of Frankenstein’s creature, the relationship in this screenplay only serves to fill in spots where nothing else is happening. Really, I don’t understand why so many movies have to include a love angle, as if it’s written into the rulebook somewhere. If it’s organic, sure, but why does there have to be one in here? Why does Igor have to fall for a woman in order for us to watch him develop? Yes, he’s living life now outside of the circus and everything is different. There are enough things going on, though, and adding the love interest in only muddies things, taking away from the main relationship between Igor and Victor. The bit of time spent on this other relationship could’ve been spent strengthening everything else happening.

The finale is exciting, if you like loud bangs and sparks flying, yells, those types of things. Other than that I wasn’t too impressed. This is a 3-star film at best. Shelley’s original story is one I love, and there are absolutely some excellent revisions here, making parts of the film fun. But in the end, Victor Frankenstein has tonal issues and drags on due to a lack of focus. The efforts of McAvoy and Radcliffe are not enough to save this picture, which is too bad because they are talented actors with plenty to offer. Everyone here tries, I can’t even fault Landis for not trying. Simply put, a swing and a miss. Entertaining enough to watch some night with the lights down low, but don’t expect any sort of classic in the making. Because this is only a relatively decent popcorn flick.