Reverend Anderson (Philip Glenister) presides over a very small funeral for poor Norville, after Kyle (Patrick Fugit) found him bloody and murdered at the end of last episode. And then Sidney (Brent Spiner) shows up, claiming himself as a “friend” and claiming Norville must have been distraught over the loss of his wife. Sidney says he’s in town to take care of Norville’s affairs, all that stuff. What a god damn liar. Although I can’t wait to see more of his character. He’s sinister, as we know it was him to have done the need. Or at least it’s highly likely, anyway. So I want to know his full deal. I suspect he’s a demon, but won’t jump to say anything. I’ve never read the source material, I wouldn’t know where this is headed. I can only judge by what we’re given. And I dig the slow burn nature of the plots coming together.

Anderson is an interesting character, too. He has a bunch of keepsakes at home. Little trinkets he keeps from the exorcism work he performs. When he touches them the memories come flooding back, of the demonic possession he’s seen, the victims of said demons. Tragic life to live. In other parts of town, Mark and Megan Holter (David Denman/Wrenn Schmidt) are happy. At least they seem to be, even if she’s got other things happening in her life that he doesn’t know about – Donnie Hamel (Scott Porter) kicking around town and all. He actually shows up while they’re out at dinner. He brings up awkward conversation  and while Mark does his best to be polite, his wife is rocked by his presence. There’s a very aggressive element to his presence. More plot and character development/history to come out. I’m sure there’s something deep lying behind their relationship.
Then we get more of Chief Giles (Reg E. Cathey), this time at home with his wife and friends, Mr and Mrs. Ogden (Peter Burris & Debra Christofferson). When they’re alone, Giles passes the gold watch over to his buddy. With that, this plot thickens. 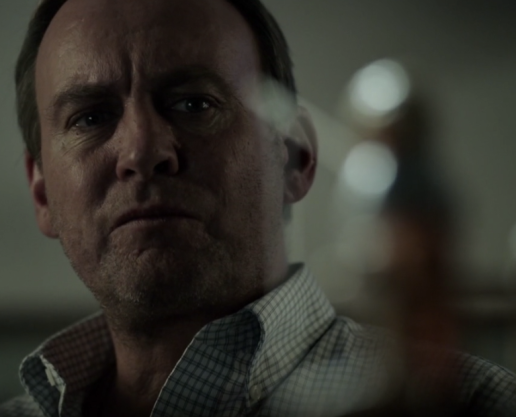 At a bar, Kyle runs into Donnie. The whole family clearly has a connection to him. That comes up quick and violent after Kyle attacks him right off before they’re both tossed out of the bar. They fight some more outside. Mostly, Kyle gets his ass beat down. “Always playing the guardian angel,” Donnie smirks above him: “Haven‘t you figured out they don‘t exist?” Next morning Kyle calls his sister. He’s not willing to “ignore” whatever it is that’s happening(/has happened) between them. For the time being he promises not to do anything too drastic. Something big is behind all this and I’m intrigued as hell.
Later on Kyle goes to see Anderson, who’s busy cleaning up the cemetery, picking up trash. The Rev lays it on his younger friend, saying that to get into this whole thing and help people, to fight those demons while using that gift of his there’s a need for people to trust him. They don’t right now. Lots of talk, then his dust up with Donnie. No matter what’s going on there is a good bond between these two. Because really, they’re the only two who know for sure that there’s something dark going on, that the devil is more real than many are willing to believe. And it’s no big religious thing, at least not to Kyle. It’s merely a stand between good and evil. Well the exorcist duo head over to another house, the door has a German “Willkommen” on the door. Inside Anderson sees a few ceramic boys on the window ledge and starts to have flashes of what he’d thought of earlier while touching the trinkets he keeps as souvenirs. Meanwhile, Kyle goes in to see Mildred (Grace Zabriskie). She knows all about Kyle. She alludes to him beating his wife, and in general having a problem with violence. Mildred has trouble sitting down, but when Kyle goes to help her it all but sears her skin. The whole thing is incredibly unsettling, which sends Kyle out fast. We discover more about Mildred, how she’d supposedly been exorcised. And Anderson says she’s been in church for the past couple years, singing, praising Jesus. Could he maybe be a bit too naive? Perhaps the fresh eyes of Kyle Barnes are really needed to figure out exactly how devious the devil can get in his work.
Out on his own, Giles is suited with rifle in tow for a trek in the woods. He’s back at that dirty old trailer trying to find out more about what’s going on out there. 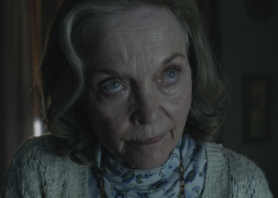 Poor Megan is twisted up over the appearance of Donnie in her life again. Her husband’s worried, and their life is being affected. She can’t even think of anything related to Donnie without getting upset. Then we get a flashback from Megan, she peeks through a bathroom door before running to her room, towel on, and then who I can only assume is a young Donnie corners her, crushing the tail of her white stallion toy on the floor. In the present, Megan takes out a gun and holds it with a look of intent in her eyes.
On the street Mark picks up his brother-in-law Kyle, who reluctantly gets in the cruiser. They go for a beer. Mark wants to talk about Donnie. Right away you can see the look on Kyle’s face change, his entire body language and demeanour becomes more tense. “Is that him?” asks Mark. He obviously knows about whatever happened, just not who did it. We find out Donnie was a foster kid that their family took in and he abused Megan. Yowzah. Lots of explosive stuff about to happen. Disgusting that Mark had to figure it all out this way. Furthermore, Kyle tells Mark about how when he found out what Donnie was doing, he started sleeping on the floor of Megan’s room. So more and more he’s painted as less of a bad guy, and even Mark comes to see him a bit differently, even after all the stuff with Kyle, his wife, his child – something we still have yet to fully discover ourselves.
At the hotel, Megan confronts Donnie. She wants him to leave and he tries saying that he’s changed, that he was a “fucked up kid” and nothing like that anymore. Not sure how this will all play out. I’d like him to get shot, Megan definitely has her gun. Though I doubt she’ll do that.

Anderson is back to visit with Mildred. After the incident with Kyle he wanted to be sure she was all right. Truthfully, he’s doubting his own work. He believes Kyle may be right, underneath it all. He questions Mildred about her grandchildren, the fact she doesn’t want to be around them these days. This is a truly eerie scene. I love it. “What if we like who we become?” Mildred ponders out loud to the Reverend. It becomes clearer by the second there is still something demonic, something evil lurking inside that woman, and it’s obviously gotten better at concealing itself beneath her skin. The Rev finally admits to Kyle he didn’t get the job done on Mildred. Off they go on their merry way, exorcism kit in hand and ready to fend off evil once more. Only Mildred’s daughter won’t allow them in, she knows what Anderson did to try and get the devil out of the old woman before – the demon tells lies, of course.
In the woods, Giles sees his old pal Ogden throw a load of gas over the trailer then proceed to burn it down. Ah, more developments.
Out on the highway Mark pulls Donnie over. He orders the man out of his car, and you can feel the tension fatten up, so thick you could cut it with a knife. And in this day and age you can be sure the dash cam catches Mark beating the hell out of Donnie, throwing him to the roadside, laying into him. At home later that night, Mark gets a call from the Chief to run all that evidence he collected previously down at the trailer. But now Mark has to deal with his own morality, he has to live with himself. No doubt Donnie deserves all he gets, though this whole thing has definitely damaged Mark’s moral core.

The worry in Kyle for the mistakes Anderson has made mounts. He worries now for his own wife Allison (Kate Lyn Sheil), even if she’s got a restraining order on him. What if the Rev has failed to exorcise many demons, not just Mildred? Might mean a ton of dark souls are out there waiting to be saved, or trying hard not to be.
In the trees somewhere, Megan sets up a bunch of glass. She smashes it with a hammer taking out her rage in the privacy of the forest. The pain inside her has to come out, and luckily she isn’t doing anything nuts. I thought she’d have killed Donnie, or maybe she was heading down to do some target practice in preparation. However, I think what we’re seeing is that she is a good person, she’s been degraded and abused terribly yet she chooses to take out her aggression without hurting anyone, putting her in juxtaposition with her husband. Here, the person that was abused isn’t the one wanting the revenge, or at least she isn’t taking it herself. The man always has to step up and make it about his own feelings and his own rage. At the same time there’s a division between people willing to step over the line when necessary and those who will never step over it on principle. Mark is a good man, but this episode sets up a big duality between those who choose to take care of evil firsthand and those who would simply rather try to get past it, however they can. A great episode. Love this series so much already. Some think it’s too slow, I find the pace extraordinary. It sets things up well and gives us a chance to speculate, before the plots and the characters develop. Lots of surprises, lots of creepiness. Can’t wait for the next episode!