Swarms of bodies are at the gates of the hotel. But not walkers: people. They’re refugees trying to find safe haven. Madison (Kim Dickens), Alicia (Alycia Debnam-Carey), Elena (Karen Bethzabe), they all stand there not knowing how to turn people away, yet having to do just that.
Then in the crowd Madison sees a face – it’s Travis (Cliff Curtis). He’s finally come back to her.

We switch back to some time before with Chris (Lorenzo James Henrie) standing over the dead man he shot. This is the moment which ultimately devastates his father. For the time being, Travis sticks around to try helping James (Israel Broussard) got shot in the process, doing a bit of stitching to the best of his ability. The humanity of Travis is still there; he digs a grave for the man who owned the farm, even makes a cross to go on top: “I don‘t even know your name,” he laments over the closed up grave afterwards. Later that night everyone sits by the fire and eats chicken, enjoying the farm’s commodities, except Travis. He has no time for the way his son’s acting after having murdered a man in cold blood. I genuinely don’t like Chris. He is a “savage” just like his father says.
Cut to Travis at the gates of the hotel. Alicia asks him outright where Chris is, and the look on his face certainly does nothing to assuage any fears she might have in her heart. But again, I can’t stand Chris. He deserves whatever he gets.
Madison and Travis talk about Nick (Frank Dillane) a little. Inevitably, Chris comes up. Travis tells her “I had no choice.” And so we’re back to the farm again. The chicken is gone, then the crew are ready to move out after a week; heading to San Diego. Feeling it isn’t the right choice, Travis does his own thing around the farm a while. He searches the house to try and find the owner’s name. After finding a wallet, he’s able to carve out the name in his cross: Elias Suarez. Soon they all board the truck and leave. Not long and they have to stop because James isn’t healed enough to travel. And you know what that means – Travis is at odds with the group again, as they’re ready to leave James behind to die. 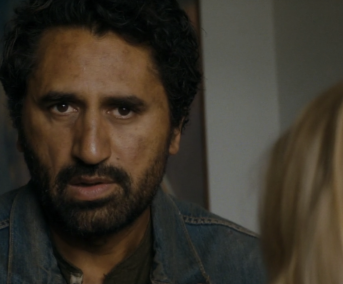 Guns are drawn and shit gets serious. Travis waits it out with James to try protecting him from the group. Chris ends up coming in and tricking his father, they hold him down and then James is murdered in mid sentence. “Your way doesn’t work,” Chris tells his father before leaving with the other two men: “I‘m better off without you.” He believes that who he’s becoming is right. He has actually become a sociopath. Much as I hate him, seeing Travis have to watch him drive off is heartbreaking.
At the hotel, Travis at least feels lucky to be at the hotel with Madison. He still feels guilt for what’s happened to his son. “I left him,” he tells Madison. She tries to reassure him things will be okay, but sadly too much has happened and right now Travis is profoundly wounded. His morality is all mixed up for having lost his boy.
Meanwhile, there’s all the refugees. They were let in because the people at the hotel haven’t become hardened, they still want to help others as much as they can. Alicia is checking people out in a makeshift medical tent, although her mother comes to get her – Madison reveals the truth about her father’s death not being an accident, and in fact a suicide. His note simply stated: I LOVE YOU ALL BUT ENOUGH’S ENOUGH. This, of course, rocks Alicia. The honest openness of Madison is enough to keep mother and daughter from any hurt feelings, even if it’s tough to digest. Alicia is strong, though, and together these women can get through anything. At the same time I can see there’ll likely be fallout from this decision of Madison’s because Alicia still feels upset deep down. And who wouldn’t be?

They’ve got worse things to worry about right now. Because at the gates, up turn the group Travis left behind. You know he can’t be in the same place as them. Will Chris pull Travis back in and will they be let past the gates? Or will someone let them through unknowingly? Is Chris even with them??

Can’t wait for next episode – “Wrath” – and I’m hoping for a big, angry confrontation! This was a nice episode. I’ve seen reviews already saying it was boring, nothing happened, same old stuff. This is the episode I’ve waited for, to see a rift open up between father and son. Again, that’s also paralleled in the troubles Madison has with her own kids, albeit less intense than Travis and Chris.
Either way, pumped for the next chapter in Season 2.