The cast of My Roanoke Nightmare attend Paleyfest, where Shelby (Lily Rabe) and Matt Miller (André Holland), Audrey (Sarah Paulson), Lee (Adina Porter), Dominic (Cuba Gooding Jr), Monet (Angela Bassett), William Van Henderson (Denis O’Hare), Rory (Evan Peters), Sidney James (Cheyenne Jackson) – they all answer questions for the crowd on a panel. The fans all go wild. One especially for Lee, who she feels has been unfairly judged. Shit. If the girl only knew.
The Lee fanatic posts online about the second series being “crass” instead of doing anything artistic. We also find out Lee’s headed for a murder trial. And the remaining Polk brother Lot intends on murdering her if the courts won’t do the job. 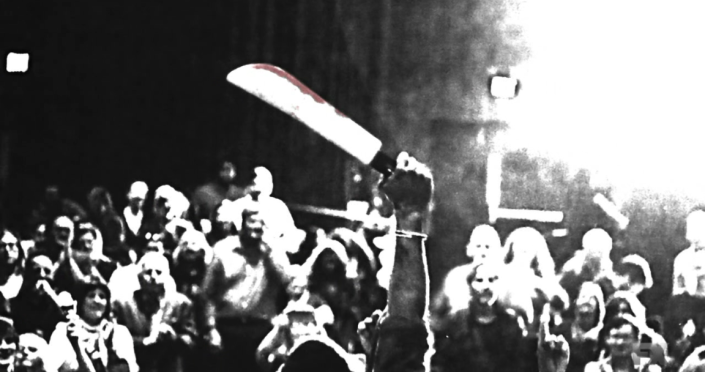 We get television special on Lee and her history. Her family, the addiction, the custody battle, her husband’s murder. Once Return to Roanoke: 3 Days in Hell was filmed, things changed, as we know. The trial went on. The video of her torture by the Polks was used to get her acquitted, playing sympathy to the juror. But the murder of her ex-husband Mason is still on the books. Her own daughter witnessed Lee crack her dad in the head with a rock: “You killed daddy,” she says on the stand. Only problem is that Flora sounds crazy because she saw ghosts in and around the Roanoke House. And so the verdict comes back Not Guilty.
Now we get Lana Winters (Sarah Paulson) back for another season! A survivor in her own right, she is now interviewing Lee Harris after her big murder trial. “Questions remain,” Lana explains. She’s come out of retirement and everything, just for the live TV interview. We get a very familiar looking format, makes the whole bit feel genuine. Lana asks her questions, starting off with soft lobs and working up towards the harder stuff. First, it’s about the custody. Secondly those murders still linger on in public consciousness. Then we get a Bloody Face namedrop, as Lee brings up Lana’s own history with maniacs.
Afterwards comes an intense moment. Lana asks where Flora is, after reports of the girl going missing just before they began their interview. Suddenly outside is the sound of assault weaponry. Lot Polk has arrived. He wants revenge. Lana tries talking him out of it and only gets knocked out with the butt of a gun. Luckily, a cop busts in and blows the guy away. Lee makes away again.

A show called Spirit Chasers takes Ashley Gilbert (Leslie Jordan), star in the original series’ reenactments, out to the Roanoke House in order to try figuring out: is it all real? A steel fence went up around the place trying to keep people out, but the show’s crew heads in on their own. During the Blood Moon. Isn’t that great? They head on in without understanding how real any of the madness there is, and surely something nasty is poised to happen. As night falls the crew go about their usual routine, detecting spirits and hoping to find conclusive evidence. Soon, the spirits start to wake. Doors slam shut. Air rushes through the rooms. Ashley even finds a bonnet laying around: “The Real McCoy,” he says and not a prop.
Craziest of all, Lee shows up from out of the blue. That is fucked up. She wants to find her daughter, and she looks crazy as hell. She warns the crew and Ashley away. The Spirit Chasers want to help her, although she isn’t too keen. On one of the crew’s thermal videos they see one of the Chen family, creeping around the walls. A recording captures the eerie voices of children, Priscilla to be exact. When Piggy Man turns up, game over! Ashley is dispatched first. Then another, as one of the Chens hauls them off. Police show up and by that time even The Butcher is carving people to bits. 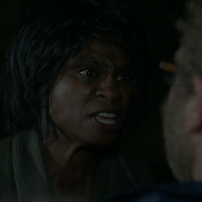 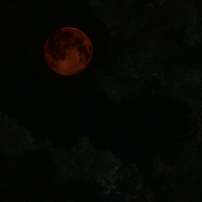 It seem as if the whole thing’s turned into Lee in a hostage crisis. We get plenty news coverage on the ordeal, including Lana Winters at home recuperating well. People want all the reality they can get. From reality television series to complete reality. “When we latch onto something it becomes our destiny,” says Lana prophetically.
At the Roanoke House, Lee and Flora are inside just fine. Her mother asks about what she ate in the woods, how she survived. Mostly she tries to explain to Flora how things ever got so bad, what it’s like to be a parent trying to make the best life for her and her family. None of that is any good when the girl clearly saw her own mother murder her father. The hardest part of everything is the fact Flora still has Priscilla kicking around in her head, or y’know, right in front of her. 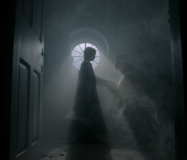 Then the house begins to burn, out walks Flora safe and sound. Inside, Priscilla helps Lee dies, and the house blows nearly to smithereens, the top exploding with fire. While Flora is taken away from the old house her mother and Priscilla walk into the darkness together, torches light the woods, and the Lost Colony descend with the Blood Moon high in the sky.

I absolutely fucking adored this season! So many interesting things went on and the format really worked out in the end. Very fun to bring Lana Winters back, too. Such great stuff. I’m excited now to see what they’ll do next season. This series, for me, gets better each year. Some don’t agree, but I couldn’t care less. A spectacular bit of television, and this season was beyond expectation.