Rick (Andrew Lincoln) and Michonne (Danai Gurira) are a great team, both in intimate relationship terms and also on physical ass kicking (etc) terms. They’re out on the road, finding supplies, scavenging what and where they can.
Michonne: “We gonna win today?”
Rick: “Oh yeah”
Although they don’t find much there’s a positivity in them that didn’t exist before. Then they come across a couple guys whacking golf balls, making away with their stuff. Afterwards, Michonne wants to go back to Alexandria after being gone two days already. But Rick wants to stay on the road a little longer.

At home in Alexandria, Rosita (Christian Serratos) stitches up a cut while Tara (Alanna Masterson) tries convincing her things will turn out fine. Rosita doesn’t buy that, she feels like it’s a losing battle. And who knows? Maybe it is, for some of them.
In the meantime, Rick and Michonne keep searching in the wilds of the apocalypse. They come across a deer in the woods, but it runs off before they can kill it. They track it and find an old high school. There also a military man, with a military gun and a bit of ammo. More than that a crazy event went down some time ago on those same grounds. Perhaps there’s “serious” guns and ammo laying around elsewhere. They get up on top of the school and discover a field out back, a carnival setup. Tons of walkers, as well as guns, lying in wait. Then Rick and Michonne have a few laughs, from falling through a roof to shooting down cans on a carny’s attraction.
But when they go through the roof, they stumble onto a few pallets of wrapped food. Score!
Note: Nicotero slips in a nice Creepshow reference with the zombie in the CASH ONLY ticket booth.

Rosita can’t let go of all the people dead. She blames it all on listening to Father Gabriel (Seth Gilliam). He doesn’t have much time for her chastising. I don’t feel that it’s fair she takes it out on him. He’s come a long way compared to many of those in the group, having done a 180-degree turn from who he was in the beginning; no longer a coward, now a noble man and one who does whatever he can in his power to help the people around him.
Gabriel: “Anything‘s possible until your heart stops beating”
Over a little dinner, Michonne asks Rick about what next – after they kill Negan (Jeffrey Dean Morgan), take their world back. She believes they’ll have to put the world back into order then, once Negan’s rule is finished. She also thinks Rick is the man to do it. He’d rather be “reordering things together.” And she’s just fine with that.
More and more, Tara struggles with telling Rick about Oceanside, all those guns. A tough decision. Based on the greater good.
In the field behind the school, Rick and Michonne go about clearing a path through all the walkers. She takes the bulk of the walkers, as he commandeers a nearby car to help with their plan. When a military zombie’s gun starts firing, she hops into the trunk of the car while Rick hides up front, and the vehicle is swarmed by the dead. They manage to crawl out through a sunroof, which gives them a few moments to kill a few until the fence they’re inside caves. Further they’re backed up, then ingenuity strikes, as it does so often. They go about slicing and slashing and crushing more heads; the fucking Dream Team, baby! What an awesomely edited sequence, just quick cuts between each of them killing, one after another.
Out of nowhere, the deer. Rick spies it feeding on some grass. Before he can shoot it, a bunch of zombies move toward it. Not before he takes a spill and lands right in their midst. Michonne runs to him, as his gun clicks dry. Then she thinks they’ve eaten Rick. But it’s the deer. Thus begins a beastly round of killing by the ever excellent duo.

They collect a bunch of guns from the field, racking up a nice little collection, too. Then it’s on back to Alexandria. Poor Michonne’s been through a lot. I think it’s scared her, how devastating it’d be to lose Rick. She went through the emotions already in that moment. Then he admits to not sleeping lately, thinking of “everything we lost” such as Glenn, who saved him in the beginning and who he couldn’t save in the end. He reassures Michonne they’re going to fight Negan and his Saviors. He knows they’ll lose people, possibly even each other. “Even then it‘d be worth it,” he says. She doesn’t want to lose him. Although Rick makes clear they’re going to live from now on, not worry about just themselves, and that if he dies she’ll be the one to carry them all forward: “It‘s about our future.” A truly sweet, tender moment for them together.
Rick heads to see Jadis (Pollyanna McIntosh) with the guns – sixty-three, to be precise. She isn’t satisfied. They need more, about twice as much. A bit of haggling, then Jadis and Rick come to an agreement. Even if she and those garbage people are fucking weird as hell. I think they’ll prove to be helpful, ultimately.

At Alexandria, Tara says she has something to tell Rick. Will she let on about Oceanside?
Meanwhile, Rosita is on a mission. She goes to Hilltop, to see Sasha (Sonequa Martin-Green). She wants her help: to kill Negan. Seems like everyone’s on the same page, some are just turning their pages to get there faster.
Sasha: “One condition – I get to take the shot.” 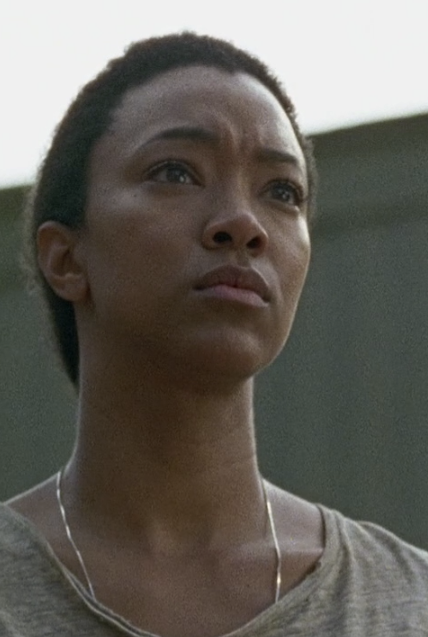 Whoa, man. I’m afraid one of them will get killed, though I’m simultaneously happy the women are taking charge. Not that I don’t feel Rick and Michonne have a good plan, they do. It’s simply nice to see a couple women taking the fight to Negan. He deserves it, and so much more!
Next up is “Bury Me Here” and I anticipate an intense chapter.