We start seeing under the hood a bit with Mike (Jonathan Banks). We get a glimpse of the better days, when he and his son Matty bonded, when his son was just a boy before the world tore him up. This is what continues to drive Mike, as he looks after Stacey (Kerry Condon) and his granddaughter much as possible. He goes to the support meetings, though he’s not really suited for that environment. It’s interesting seeing an older guy like him, how he does/doesn’t fit in with certain people his age because of his line of work.
Elsewhere, the drug trade continues— the worse side, not the slightly more glamorous one we see from Gus Fring (Giancarlo Esposito) and the men behind the scenes. People are smoking meth in dark, dangerous, rotten places. The dealers, they’re surrounded by money and guns constantly. Victor (Jeremiah Bitsui) sort of exists in a liminal space, where he deals with both sides.
Jimmy (Bob Odenkirk) continues getting job offers. Likewise, he goes on turning them down. He can’t live a regular life, he doesn’t want to go back to being a normal lawyer. He’s restless for something else. Simultaneously, Kim (Rhea Seehorn) is trying to get herself back to work full-time, and she’s also concerned for Jimmy’s mental state. She’s heard “good things” about “a shrink,” so she’d like him to go and do some talking. He shifts the conversation by lying about taking the cellphone salesman job, “strictly gainful employment” to get him back to being a lawyer. After she leaves he calls to try and take the job. Maybe he’ll give it a go after all?

In court, Ms. Wexler’s watching a few cases. The judge quietly asks to see her after the current case is finished for the day. She goes to see him in chambers. He’s curious why she’s around “just observing.” He didn’t know she isn’t at HHM anymore, working as counsel for Mesa Verde. The judge makes a long winded point about “the real world,” realising she’s looking for a big court case to give her a boost.
At the diner, Mike sits with Anita (Tamara Tunie) from group while he does the crossword. She kinda asks him on a date. He declines because he’s busy. Tamara mentions a guy from group she feels sorry for, but Mike debunks the guy’s sob story because “none of his details add up.” This shocks Anita, she can’t believe someone would make up such lies. She sees Mike’s “suspicious nature.” However, we know this guy’s attentive— it’s been his life’s work to be attentive to detail.
At CC Mobile, Jimmy starts his new shift supervisor job. He’s getting back to the real world again instead of trying to ignore his responsibilities. Yet you can see this is not the life he wants, it isn’t even where he appears to belong. The boredom’s KILLING HIM! He misses the rush of criminality, in all its forms. If he doesn’t keep busy at this menial job, he’ll slip back into that lifestyle. We all know it happens, one way or another.
Leonel (Daniel Moncada) and Marco (Luis Moncada) Salamanca are with Nacho (Michael Mando) checking out a building, looking for their target. Nacho advises the place is “like a fortress,” so it’ll require more men. Not for these Cartel monsters. The twins head inside with a bag of weapons, as their friend stays outside listening to the carnage. Others soon show up, which forces Nacho into the mix despite still being pretty fucked up from his recent injuries. He does his best while starting to bleed from his stitched wounds. All that’s left in their wake is bodies and bullet casings. 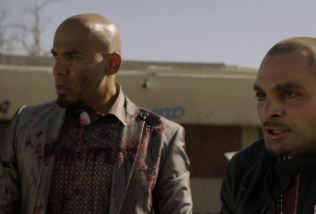 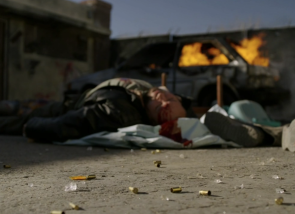 Later, Nacho reports to Gus, letting him know the twins went back down South until things blow over. Gus lets his subordinate know there’s more work to be done. I’m still worried for Nacho— he doesn’t make it to Breaking Bad, it’ll be a harsh end for him someplace.
At group, Stacey tells everyone she worries of losing Matty after forgetting a regular memory during the day. Others reassure her it’s normal. It makes Mike a little angry. Then, the guy Mike’s suspicious of chimes in. It starts making Mike angrier. He calls the guy out. He pushes Anita and Stacey away and alienated the entire group, chastising them for “feeding off each other‘s misery.” This is actually the first scene we saw— the first time Mike’s really shared with the group to any extent. Yikes. Sometimes – just sometimes – the illusion is better, Michael!
Arriving home, Manuel (Juan Carlos Cantu) discovers his son Nacho in the dark. His boy’s in rough shape. He wants to call the hospital, though his boy urges not to or the cartel will cause trouble. Although they’ve experienced a rift, Manuel can’t turn him away like that.

Mike is back at Madrigal checking on things. He inspects another place this time, questioning more employees. Then a call comes in for him: “He wants to see you.” Wonder if it’ll be a good meeting, or a bad one. This doesn’t stop him from continuing his impromptu inspection.
Out on the sly, Jimmy goes to meet his accomplice from the latest job. The guy got more than expected for their Bavarian boy and he didn’t pocket any of the extra cash for himself. Good payday for McGill. He’s also learning things about being a cheeky criminal as he goes along. This inspires him to understand his market: greasy criminals. His use of the CC Mobile windows is one of the clearest signs of Saul Goodman we’ve seen to date from Better Call Saul. It’s like foreshadowing of his lawyer shop from Breaking Bad.
That night, Mike goes out to the Los Pollos Hermanos truck fleet. Gus is there waiting for him. He’s not pleased Mike knew about Nacho’s intentions towards old man Salamanca. Our ageing hitman dares Fring to “make a move.” He knows he isn’t there to be killed— Mr. Fring has work that needs doing.

Goddamn, this series is so fucking good. Not sure how long until we get to the official end, I could watch another 4 seasons already! Anyway, “Quite a Ride” is next, and that’s the perfect description of what it’s been so far in Season 4.