Father Gabriel (Seth Gilliam) goes to the makeshift altar they have in Alexandria. He finds a plate of strawberries left for him in gratitude. He’ll never get what he did to his congregation out of his head, no matter how long he survives. He takes out the Bible and starts tearing away page after page after page, tossing the crumbled paper to the floor.
Noah (Tyler James Williams) has what’s coming to be a regular morning meeting with Reg (Steve Coulter). He wants to learn architecture— “in it for the long haul,” as the older man recognises. Reg breaks out his pen and paper, handing it over to Noah so he can take notes, as well as a general history of their community.

A run’s heading out to get supplies for the power grid, at the lead of Aiden (Daniel Bonjour). Eugene (Josh McDermitt) has to go, like it or not. Tara (Alanna Masterson) and Glenn (Steven Yeun) are going, too. Maggie (Lauren Cohan) sees her man off before they hit the road. Glenn also gets a thank you from Deanna (Tovah Feldshuh), for schooling her younger son with a punch to the face. He and the others get in the van, forced to listen to another horrible dubstep mix starting with Knife Party.
Constable Rick (Andrew Lincoln) goes by to see Jessie (Alexandra Breckenridge). She’s dealing with broken crafts. She says it’s unusual for these things to happen, though doesn’t think much of it. He tells her of the “broken windows theory,” and that nothing’s too small to ignore in a community they want to keep ordered and safe.

Tara explains to Eugene he needs to start pulling his weight. Glenn and Noah come upon a warehouse full of walkers at the front, so they all head in the back. They find zombies stuck behind a chain link fence inside, allowing them time to go looking for a micro-inverter, quickly locating it.
Aiden stumbles onto a walker wearing armour. He continues firing, not noticing the grenade pinned on it, and detonates the thing by accident rocking everyone. When everyone gets up, they see Aiden’s impaled on pieces of steel. This also leaves the fence open, allowing walkers through. Not to mention Tara’s been knocked out, bleeding from her head. Eugene’s at the mercy of zombies until Glenn and Noah get to him just in the nick of time. And it turns out Aiden’s alive, too.

At her place, Carol (Melissa McBride) hears someone snooping— it’s Sam (Major Dodson) wanting cookies. He mentions his owl statue being broken. She figures out he broke it himself because he was angry. Right now, he’s sent to get ingredients for cookies before Carol kicks his ass. She’s purposefully trying not to get close to another child, for fear of having to be devastated all over again. However, she’s beginning to see there’s something not right in Sam’s home: Jessie’s husband is abusive
Abraham (Michael Cudlitz) is having issues. He has to snap out of it when walkers show up in a horde near where everyone’s working. Francine (Dahlia Legault) is near left behind by the others, but Abraham goes to get her. He gets her in the digger nearby, taking on zombies with a handheld weapon. Later, Tobin (Jason Douglas) admits to his mistakes for causing the whole thing. Deanna replaces him with Abraham, in spite of a small worry these survivors are taking over her community.

Glenn and the others get to Aiden— he’s totally pinned. Glenn refuses to give up, even as Nicholas does. Ironic to see him being the one concerned. He hears Aiden confess to being the reason the others in his group previously died, then has to leave before Aiden is torn apart. Cowardly Nicholas is running. He gets himself, Glenn, and Noah stuck in a revolving door where they’re blocked on every side by a horde of undead. 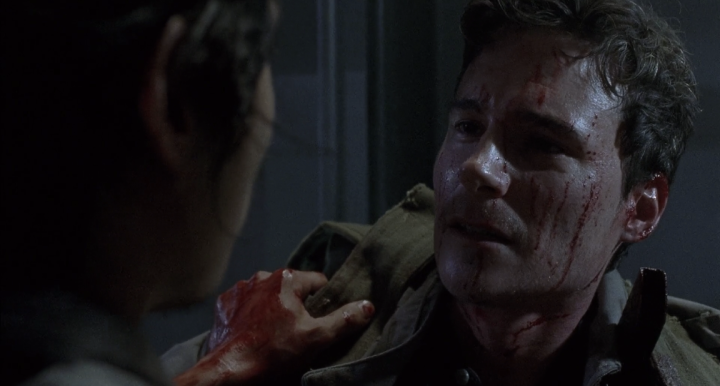 Eugene finally does a good deed getting Tara out of the warehouse and drawing walkers away from the revolving door with more Knife Party. Problem is, the door only goes one way, so Glenn has to break glass to get them out of there. Nicholas freaks out, escaping on his own. It gives the dead enough space to grab hold of Noah. Glenn’s left to watch his friend be eaten alive. Nicholas gets to the van but Eugene won’t go, getting knocked down for his trouble. Glenn soon gets out and punches Nicholas in the face.

Father Gabriel goes to Deanna claiming Rick isn’t to be trusted. Pretty rich, coming from a man who let his people die. Perfect to have Maggie near, listening in the shadows, as the man of God claims their group aren’t “good people.” Funny enough, Carol and Rick are the only ones who are trying to do anything about the abuse Jessie is suffering in her home. For all the “paradise” in Alexandria, the real world is still there among them, and at least Rick’s group understand this reality. The worst time for Glenn and the crew to get back with an injured Tara and news of Aiden’s death. 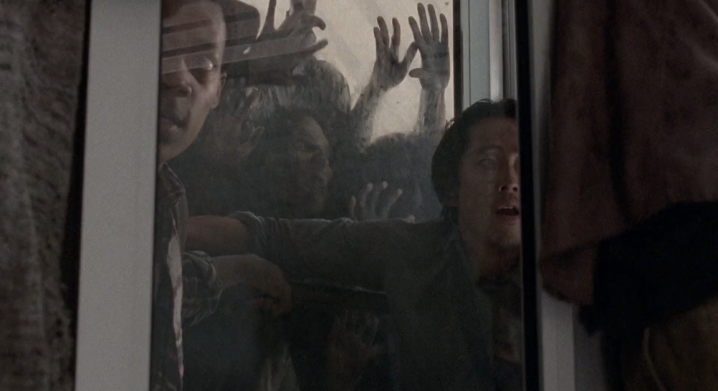 Hugely intense episode, and it sets up the last couple episodes for a lot of madness.
Chaos has come to Alexandria.