David Cronenberg’s legacy lives long in Canadian film and across the world. It also lives in his son Brandon. Yet the younger Cronenberg isn’t a mere copy of his father, either. While Brandon’s work in general so far does show the influences of his father’s films, it also goes in its own direction, imagining how culture, technology, and human psychology are changing and getting scarier in the 21st century. Possessor is a film about how the proliferation of technology in Western society has gotten out of control, to the point it’s become another avenue of violence for governments, or any other high-tech organisation, and it’s gradually eroding our sense of self.

Tasya Vos (Andrea Riseborough) works for a secretive organisation that uses brain implants in order to inhabit peoples’ bodies, using them to commit economic and political assassinations. Yet the work causes Tasya to slowly dissociate after a while, particularly once she enters the body of Colin Tate (Christopher Abbott). Colin seems to resist the infiltration of his body and mind, causing disruption and eventually chaos between him and Tasya. As things get more difficult mentally for Tasya, she loses control entirely. Eventually she’s trapped inside Colin’s mind. And their identities violently fold over one another, threatening to destroy them both. 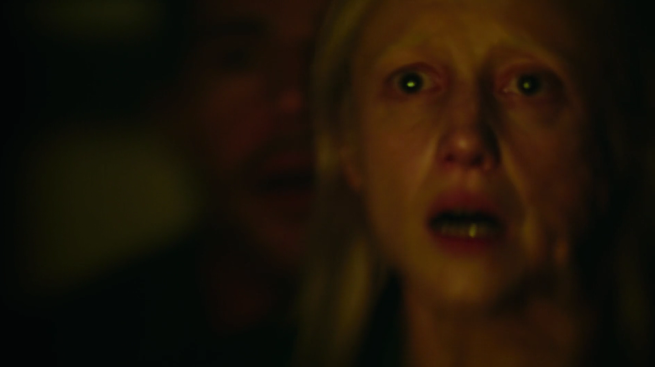 One of the biggest themes in Possessor is the changing landscape of political violence in an age of brain implants and the merging of the corporeal form with the digital. Essentially, Girder (Jennifer Jason Leigh) and her company conduct drone warfare by way of the human form. The film starts out pretty quickly with Holly (Gabrielle Graham) committing an assassination, and the racial dynamics on its face are relevant to the state of American society today. The use of a Black woman’s body inhabited by a white woman is stunning imagery, showing how capitalist culture sees Black bodies as expendable for the needs of white society, especially considering Holly gets brutally gunned down by police.

Colin’s job illustrates another devious aspect to consumer capitalism and how corporations view people, as well as how consumerism becomes yet another way for the bourgeois to spy on the working class and consumers in general. Through Colin’s work we see the connections between capitalism and surveillance; his father-in-law’s company is, effectively, Big Brother, but largely just to get ahead of competitors and keep boosting revenue. The company views the world through the prism that the commodities you buy equal your identity. Colin and his coworkers show us how compiled data, in a consumer capitalist culture, creates a whole person.
Do we really own our minds and bodies in a capitalist culture? Tasya’s intricately connected to materialism and consumer culture in that she and her boss Girder use material objects to ground her in reality, both before and after her psycho-digital missions; nothing else but materialism keeps her grounded in the real world. So Tasya and Colin are both weaved into the fabric of capitalism from different positions.

“You seem so deformed these days”

The film’s depiction of the self reborn digitally fits well with Tasya’s name, which is a version of Anastasia, comes from the Greek ‘Anastasis’ which means ‘resurrection or rebirth.’ More importantly, Tasya represents the rebirth of identity in a capitalist consumer culture, one in which the body is just another commodity, like a piece of clothing you put on when you want to—identity becomes like sitting behind a game console, controlling any body you wish. It’s also interesting that Tasya and Girder seem to use people from working class positions to accomplish their violent goals, specifically Colin, who’s marrying into a rich family but is himself not of the bourgeois class. Someone like Colin is fodder for people higher up on the social hierarchy, merely a sleeve of skin to be used for the purposes of the upper class and their demands.

Within Possessor is also a compelling trans allegory about minds and bodies, as well as the dissociation a trans person can, and does, feel when they’re forced to own an exterior identity to which they simply can’t connect. The whole film comes down to Tasya, through Colin, killing her old self. We see Tasya’s face become a mask, which Colin wears, and we see the self choking the self. Tasya and Colin don’t own their bodies, rather their bodies are owned by patriarchal society. One of the more vivid images in relation to the film’s trans allegory is when Tasya sees herself on top of Ava with Colin’s penis as her own. Finally, Colin’s violent revenge on Tasya’s family is essentially the real identity underneath working to kill off the old, non-compatible gender identity.

There’s no telling where Brandon Cronenberg will go from here. His first feature film Antiviral was exciting, and disgusting in equal measure, showing off a vividly horrific imagination. But Possessor feels like the masterwork of an experience filmmaker with many more years under their belt. Those of us who loved the film are patiently waiting for Cronenberg’s next announced film, Infinity Pool, because it’ll surely bring out more of the director-writer’s peculiar and wonderful idiosyncrasies, similar to his father’s but entirely his own, too.

Possessor is such a fantastic piece of work because the story lends itself to various readings, which the best films often do. There are many ways to explore the film’s story and its themes. The best reading of Possessor is as a critique of where governments and other agencies are headed with the use of new technologies—there was a time many of us thought about drones as just fun ways to shoot video, or to drop off Amazon packages, but the U.S. government used them for their own political purposes overseas. The film is also a major critique of consumer capitalist culture and how it affects society, turning individuals into nothing but walking wallets, and eroding individual identity until the self is no longer the self but rather a roaming avatar to do whatever the government and the bourgeois class determine. Cronenberg’s film is about many things, none more so than the fragility of identity in the face of corporate powers and the violence such power induces in everyday people.