Subvert the male gaze and smash the patriarchy: Jazzberry has arrived!

Is history as you understand it? Or, was it written by your oppressors?

Al Lougher's THE DOLLMAKER is a terrifying Faustian short film about the horror of parental grief. 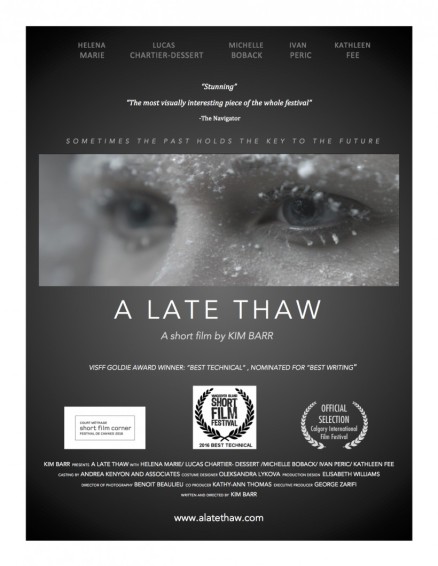 Over at ChicArt Productions they’re consistently putting out interesting little short independent films. Some are great subversions of genre, others are merely great examples of the genres in which the films exist. In the past six months or more, I’ve received a lot of fun screeners from them. I’m only now just getting around to seeing each film and reviewing them. No matter how big or small a production, it’s always a major honour for me to be asked by filmmakers and their publicity teams to take a look at their work. Getting a screener is like Christmas for me!
But it’s even better when these shorts are actually solid pieces of cinema. Usually, I receive requests for horror movies, seeing as how my website is (for the most part) fairly horror-based. All the same, I find many genres wind up in my inbox.
Director-writer Kim Barr’s most recent short, A Late Thaw, is less a horror – though it contains the essence of creepiness most of the time – and more a drama-fantasy. Better yet it reminds me of contemporary Gothic Literature, honestly. You could almost say it’s one long hallucination with bits of reality peppered in. No matter how you define it – perhaps dark fantasy might work best – Barr executes an innovative little screenplay to make 14-minute film into something magical, otherworldly, and excruciatingly personal. More than that, this short examines grief, how people deal with it, when they do, and how that grief can reach out from a person’s past to either strangle or give way to their future.

The cinematography is beautiful, at times quite surreal. Very much dig the fantasy elements, as they’re woven around the story fairly well. When Tara (Helena Marie) walks through the house and the snow is falling, frost is on the doorknob, you feel in an entirely other reality. The snow-covered stairs, the hallway shrouded with foggy, blowing snow; each moment is like something out of a dream. And then soon comes the paranoia, which includes great little sound design thrown on top of everything else. The score sits perfectly beneath all the camerawork. It pulls the viewer in with an ambient sound, swelling, fading, and helps to put us in a nostalgic frame of mind while we continue to watch on, wondering what will come next: dreams, or reality. These elements come together to create a strange atmosphere; strange in a good way. Barr’s directorial choices work well alongside the cinematography to create a space that feels like one step in a different direction through this house will take you to a whole other world. Short films by nature only have a limited window to take you inside their universe. A Late Thaw immerses us into this story so easily, so quickly, that it’s a seamless transition. One minute you’re here, the next you find yourself walking through this dreamy, cloudy house, snow falling, the air thick. A remarkable aesthetic overall, which is something I’m big on. Although the story is excellent, it could’ve been only half decent an the technical work on this film would still make it highly enjoyable.

When it comes to the titular thaw, we find out Tara has been trying to move on from a previous tragedy. Only now, with the new house and all its happiness, her old grief is thawing and working its way up to, and out of, the surface. The film’s imagery with the snow and all the frostiness is so dark without needing horror. This personal drama about a woman is moving in that it explores very touchy, tragic memories. Certainly the snow and all that are partly representative of the old lover and their apparent death on a mountain, climbing somewhere; it’s as if that atmosphere has moved itself into her house, mentally and visually we see it literally. At the same time, the snow buries, it covers up and conceals. So the further things progress in the film, the more snow covered and cloudy things become, until even Tara finds her own face and eyes covered. In a way, the snow is also grief.
Further than that those memories are evoked with interesting images and writing. For instance, at first you’ll believe the wall climbing scene is something out of place. I did, and found myself questioning what exactly was the purpose – other than to look neat – to have this woman and her friend at a rockwall climbing spot. Then as the short moves by and gets closer to the end you begin understanding why Barr decided to include this moment, as it becomes totally relevant to Tara’s plot. Even better, there’s a terribly creepy scene which sees Tara sort of falling further and further into the hole of memory, calling back the climbing. This is one of my favourite moments, it is so unique that I felt the scene stick with me long after the film finished. Again, there’s no outright horror here, yet Barr lets the psychological terror seep through the drama at the center of this story to make everything edgy, uneasy, hard to predict. The imagery is so damn powerful, I had to go back and watch this a couple times after my first viewing.

Personally, this is one of my favourite short films I’ve ever seen. There are a handful or two of shorts that are just near perfect in my mind; this is one of those movies. Kim Barr is definitely talented, and it may be her work in other areas before coming into her own as director which helped shape some of her style. I’d dig a full-length feature from Barr because if this is any indication of her talent, any studio would be glad to have someone with the writing skills she possesses, along with the fact she has a knowledgeable grasp on her role as director. Keep an eye out – if you get the chance to see A Late Thaw, do it. You will not regret these 14 minutes. And maybe, like it did me, the film just might leave a mark, too.