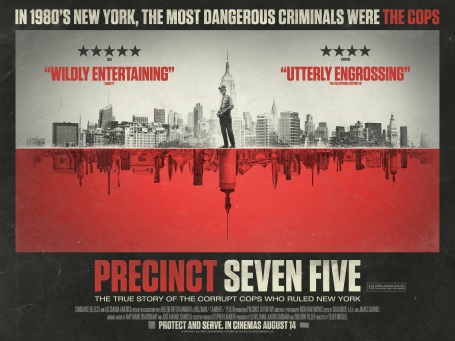 To start this review, I wanted to give a bit of personal insight into my view on police.
Firstly, I have two family members, close cousins, who are both officers here in St. John’s, Newfoundland – for those who don’t know, Newfoundland is a province on the far east coast of Canada. One of them is a new officer, the other now involved with Major Crimes from homicide to whatever else. So, I can’t say that all officers are bad. Anyone smart should know they are not.
However, second of all, I’ve had a couple experiences with police officers, as a younger man in my teen years, which now as a 30-year old I see in a different light. There is a high room for error in law enforcement, simply due to the fact that as an officer of the law you are dealing in the lives of human beings. What you do, or don’t do, can either negatively or positively affect the life of someone you take into custody/members of a perpetrator or victim’s family/et cetera. There are huge repercussions when it comes to an officer not doing their job correctly, and as we see so much today in the news coming out of America there are deadly effects when police override the law and surpass it because of their lust for power. An enormous responsibility rides on the shoulders of the police – many willingly put themselves in harm’s way to protect us from the actual dangerous elements of society, then in opposition too many seem to also have no problem putting innocent/unarmed(etc) citizens in the way of harm or outright have no problem doing those same citizens harm themselves. When the responsibility is shirked, it is not the same as even an insurance agent messing up some forms and leaving a customer without proper coverage; incompetent and downright criminal police work comes with a hefty, fatal price in many situations.

The Seven Five, directed by Tiller Russell, is the epic tale of police corruption in the seventy-fifth precinct out of New York when Michael Dowd was in uniform there. An insanely criminal lawman, Dowd seemed to infect everyone around him, including the rookies and other naive cops coming into the job. It was as if, for a time, Dowd became the centre of corruption in the entirety of the NYPD.
Through a number of talking head interviews, including Dowd himself, Russell brings us through a bunch of stories that emphasize how deep and devious the corruption went.
What began as a bit of cash, then on to thousands upon thousands of dollars, soon became a devil’s deal with drugs, guns, and murder to boot. Dowd, as we see through the documentary’s runtime, evolves from a smalltime crooked cop on the beat to, essentially, a drug dealer as vicious as any other man selling drugs on the street. From a hindsight perspective, Tiller Russell takes us through the names, the faces, the situations which brought Michael Dowd down the dark roads he took and where everyone has ended up today.

Basically, Michael Dowd is the literal representation of the criminal cop. I mean, he is the epitome of the description, he makes the whole documentary feel like a Martin Scorsese film. Sometimes he says things that are darkly priceless, maybe similar to something Ray Liotta or Joe Pesci might spit out. At times, he actually strikes me more like Lester Diamond from Casino simply because he’s a god damn nutter. It’s sick, but the way in which he basically corralled an entire dirty ring of cops is villainously smart.
But naturally things didn’t last forever for Mike. If they did, he certainly wouldn’t have been on camera telling us his darkest confessions of the nasty business he got into while supposedly policing the streets.

One of my favourite pieces to The Seven Five is the stuff with Adam Diaz.
What can we say about Mr. Diaz? He loves Bryan Adams and sold tons of drugs. Best of all, he sold them out of a grocery store. His operation was supremely slick. With some tips from ole Officer Dowd, the store could have everything looking proper, no drugs on the premises, and nothing could be said – like Diaz himself relates, even if someone snitched and said they were there buying drugs the week before, what did it matter? Who cares where they were or went or who they saw, what they bought? Didn’t matter a pinch. Because as Diaz says, there were no drugs – “I sell groceries!”
In the year 1987, one kilo of cocaine was equal to about $34,000. Diaz, 20 years old, was selling 300 kilos a week, bringing in hundreds of millions a year.
The reason Michael Dowd and Adam Diaz became as close as they were was due to when Dowd gave Diaz a tip which saved the dealer half a million dollars. A raid was on the way, which Dowd headed off with the tip, and this proved to Diaz this was his man.

So we can see how it wasn’t simply a bunch of crooked cops, Dowd was involved with true criminal organizations, such as the Diaz Organization which had its own ties to further criminal entities. It’s amazing to watch how the corruption basically leaks out, like an oil spill milking thick out of a barrel and spreading over the entire city of New York. Sad that while so many people needed help, some criminals could’ve been taken off the streets, Dowd and Ken Eurell, his unfortunate partner that was near hypnotized by Dowd, and the other corrupt officers were just feeding their egos, their bank accounts, and sure, their families.
But it’s funny, nowadays in America, and back then certainly, we’re less willing to indict cops as a society overall than we are to shit all over people in unions. And basically, these officers, headed by the insanity of Michael Dowd, went into a union-like situation – the big argument for corruption is “They don’t pay me enough for the danger of the job I’m doing” – and instead of striking, instead of fighting for higher wages and trying to negotiate, they went above and beyond any normal reactions straight into using the leverage and power of their positions to commit criminal acts; acts they were arresting others for committing, all at the very same time.

With every day that passes by in America, there seems to be another incident where unarmed people – most if not all are black – get murdered by the police. Straight up. So many news stories breaking, each week, where another black man or black woman is taken down, either by police in the field or in custody. It’s disturbing. Feels like nothing has really changed, as we watch Dowd during his interviews and the tapes of his testimonies – sure, this is not about racism, but it’s above all about the corruption of power. The same thing happens today. We see at various points throughout this documentary how a lot of the negative behaviour some police officers come to display is bred into them through senior ranking officers, detectives, et cetera, the rookies are working under. Much like hate and racism/sexism is learned behaviour often stemming from the family one grows up in, or the parent figures one is raised by, the same goes for this corrupt behaviour in police officers; much of that comes out of learned and encouraged behaviour.

I don’t want to say too much else about the documentary, much of it is information you need to hear firsthand.
For me, The Seven Five is a 5 out of 5 star documentary film. It outlines the corruption of the time in the NYPD so perfectly, examining one of the most corrupt police officers to have ever lived. Michael Dowd is a truly disturbing, bad dude when it comes down to it. The quote above shows that, infinitely. People like to think there’s a need for that blanket statement – that all drug dealers are human garbage, every one of them. Unfortunately, you just can’t say that. Especially if you’re an officer of the law, not simply because you should be objective at times as to avoid collaring the wrong suspects and leading yourself into trouble, but most of all it can lead to the detrimental thinking in police officers such as Dowd: it leads to the illusion of power. It leads people like this man to believing that they are truly above someone else on the evolutionary scale, as if they’re the perfect example of Charles Dawin and the idea of Survival of the Fittest – the dealers, the crackheads, all of them are weak and therefore ought to be weeded out. In a microcosm, this is the thinking which leads people to believe the ideologies of leaders like Adolf Hitler, Josef Stalin, and so on.

You should see this documentary. One of the better recent crime docs to come out. Especially if you’re interested in police corruption, civil rights, and other similar subjects. I highly recommend this. Not only interesting, The Seven Five is a smooth and flowing documentary that keeps the audience engaged, provides a ton of information, and even gives us a few truly dark and disturbing moments when it comes to the crime underworld and corrupt cops.
Check it out, let me know what you think in the comment section below!