Even though I do like certain novels and films in the science-fiction genre, mostly it isn’t one I’m huge on overall. Not knocking it. I prefer horror, of many kinds, dark dramas and thrillers. Yet that’s the thing about Star Wars, its appeal crosses over regular genre boundaries. It reaches out on many levels to different audiences and draws them together. People act like the franchise’s fans are strictly a ton of sci-fi nerds. Wrong. There are so many people who love Star Wars that come from different backgrounds, in terms of their genre preferences.
Above all else, George Lucas’ first Star Wars film, fourth in the timeline, A New Hope is an incredible achievement. It breaks us into a massive space opera story, throwing us into its middle in an ambitious move by a somewhat beginner filmmaker (yes I know he made films before but c’mon – this is way bigger than anything else he’d done before). The way Lucas fleshed out a massive franchise by putting us into Episode IV as the start of the films released, it’s pretty damn impressive. The ambition is strong in this one.
With a ton of interesting and innovative effects, alongside fun performances from relatively unknown actors at the time, and a truly interesting overarching story, Lucas was able to birth one of the most influential franchises in film history, as well as one nobody who’s a fan will or could ever forget.

I won’t waste time explaining any of the plot, as I usually do with my reviews. If you haven’t seen this yet you probably already know a good deal, having heard much about Princess Leia Organa (Carrie Fisher), Luke Skywalker (Mark Hamill), Chewbacca (Peter Mayhew), R2-D2 (Kenny Baker) and his often times pessimistic companion C-3P0 (Anthony Daniels), as well as the handsome smuggler with an attitude Han Solo (Harrison Ford). Even those who’ve never seen a single film in the entire franchise know many of these names. Very hard not to, especially in today’s age of social media.
So instead of recounting the plot a little, I’ll dive in.
Immediately, the first few scenes of A New Hope always grab me. I particularly love the Stormtroopers and their gun fighting, lasers going everywhere, pew pew pew. But it’s the white, sterile sort of spaceship in which they’re fighting that grabs me, then in the middle of it all Darth Vader (played by David Prowse; voiced by James Earl Jones) strolls past in his stark black costume, the iconic helmet shaped like an old Rolls Royce. There’s something about the visuals in the beginning which continually gets me. No matter how many times I see it, no matter that I know what’s coming, there’s a quality to the beginning of the film that catches me and from the start keeps me wanting more. Of course, more comes. Even better is the fact everything outside the spaceships looks so rustic, from the planet Tatooine itself with its desert feel to the cantina, to the Millenium Falcon with its lived-in sense of atmosphere, as if everything is old, used, and the battle between the Empire and the Rebels has decimated almost everything wherever anybody goes. So what really impresses me off the bat about Star Wars: A New Hope is the production and set design, the art department, and more. Once you get further into the story, the special effects impress. And after finding out the origins of the many iconic sounds – lightsabers in battle, the firing guns of the spaceship and so on – it’s all the more interesting because you can see the innovation it took on the part of Lucas and his entire team. They didn’t half-ass a single second. 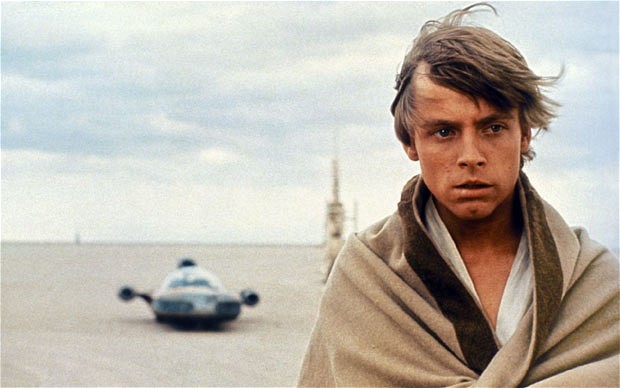 From the look of the film physically, in terms of set and design overall, we also need to remember the magic cinematography of Gilbert Taylor. His amazing credits include Dr. Strangelove or: How I Learned to Stop Worrying and Love the Bomb, Roman Polanski’s harrowing Repulsion and his later film Cul-De-Sac, as well as The Omen, all of which saw him in the role of Director of Photography. And because of this, we have him to thank – as D.P. once more – for the gorgeous look of how A New Hope was filmed. Then, you add in the massively talented John Williams, whose score is one of the most iconic bits of film history; even if you don’t know the movies, you probably could recognize the theme and other portions of the music.
Moving on, the editing is also a large part of why the movie works, from its wonderful sideswiping transitions to the excellent cuts between the action. Several editors worked on the movie, including an uncredited bit of magic from Lucas himself. However, Paul Hirsch is the one I find myself most interested in, as his work spans many genres, many amazing filmmakers: several Brian De Palma masterpieces such as Sisters, Phantom of the Paradise, Carrie and Blow Out; then there’s also his work on Creepshow (“The Crate”), Ferris Bueller’s Day Off, one of the funniest films ever Planes, Trains & Automobiles, Falling Down, another excellent De Palma adaptation on Mission: Impossible, plus several more recent films that are pretty fun and interesting. So Hirsch brings all that talent to A New Hope – one of the first half dozen movies he worked on. Moving past his efforts for Lucas, which also include the sequel The Empire Strikes Back, he’s become a sought out editor having done one of the latest Mission: Impossible sequels, as well as the upcoming Warcraft movie. Most of all, you can tell even in this movie, at the early stages of his career, Hirsch was talented. The editing could’ve easily been shoddy in A New Hope, but his work, plus the work of the others involved in the editing room, makes this piece of science fiction a masterwork. The transitions between scenes has a remarkable feel, which makes you often forget you’re watching a supposed space opera. Instead, it feels like any other classic, well-made film of its era. Perhaps even better. All due to so much great technical work behind the scenes, elevating all the other work out front.

But without the power of the actors starring in A New Hope, even the most amazing work in terms of editing, cinematography and score would all fall short. Carrie Fisher plays Leia as both a strong yet still vulnerable person, as does Mark Hamill; the parallels between there characters exists in the fact they’re both natural leaders, however, they’ve not yet realized it in this first film. At the end of the movie, both Luke and Leia appear to us now more mature, changed, ready to take on whatever else comes.
Further than that, once Harrison Ford’s Han Solo comes on the scene there is an extra dimension of charisma and swagger not yet present in the filmic universe of Star Wars. Not only does Solo give us a bit of comedic relief at times, there’s also an intensity to his character, the rebel who is not actually a Rebel, if you get my drift. Him and Chewbacca are the two inseparable friends whose job takes them from one end of the galaxy to another. Moreover, Han plays the part of the disbeliever – the one whom Luke, mainly, must convert. So what I like is that Solo also brings in questions of faith, of belief, and this gives us a nice counterpoint to someone like Skywalker who believes deeply in the force, certainly once he starts to discover his Jedi connections. Truly, though, if Ford didn’t play the character, I’m not sure who could’ve done the job. Definitely sure there aren’t many, if any, who could have come into their own as Han Solo and look as good doing it as him. It’s hard now to imagine anyone playing either of these main parts, but seriously: these actors brought a ton of emotion and charisma to the entire movie. The most important of these elements? They bring heart and soul.

This has always been a favourite of mine, specifically in the science fiction genre. While it’s not as leaned towards science as other movies, in regards to authenticity, that does not matter. You know, I love Neil deGrasse Tyson, but following along closely with actual science isn’t something I care about when watching films.
For a long time, I considered this a great film. Nowadays, after watching it more than several dozen times in my life, I consider A New Hope perfect. Not to say there aren’t any little mistakes or flubs along the way. But to me, personally, this is a 5-star film. This has a beauty and grace about it, and also contains work above and beyond the call of duty in terms of its technical aspects. Not to mention I still get chills now and then whenever I put the Blu ray on. The influence of A New Hope is vast, it will never ever die. And with Episode VII The Force Awakens recently rocking the box office, continuing to do so, the legacy of George Lucas and his original work from 1977 endures. Its light won’t ever, ever go out.