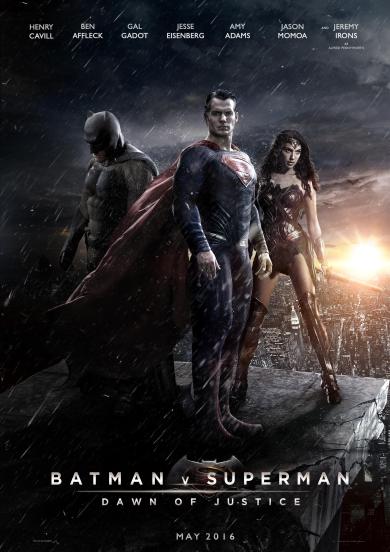 Personally, I’ve mostly given up on comic book movies. I give some a chance but on the whole I’m not into them anymore. Nor am I someone who finds Christopher Nolan’s trilogy to be the perfect superhero films – though I am a fan. Recently, I absolutely loved Deadpool because of its willingness to be different, to be strange and defy the comic movie genre. Even enjoyed some of 2004’s The Punisher, for what it’s worth.
And let me get this straight: I love Batman. Okay? The 1989 Tim Burton adaptation is a classic, one I saw at an early age, which in hindsight might not have been the greatest decision my grandfather ever made. But regardless, I then came to love the Adam West, campy version of Batman in the 1966 television series, and the following movie, too. They are awesome pieces of nostalgic camp that should never be forgotten. Aside from all the films I was first and foremost a comic fan. As well as a huge fan of the graphic novels when I get a little older and first discovered those – my favourite still being Arkham Asylum: A Serious House on Serious Earth, and of course Year One is up there. So don’t knock me and say I don’t like this movie because I’m not a Batman fan. I am. All the same, Superman is not a favourite of mine. Not into any of the movies, didn’t enjoy Man of Steel, and at his core Superman is just not interesting to me. However, I dig the relationships between Superman and Batman from some of the comics/graphic novels. They make for an interesting pair.
Sadly, my opinion on Zack Snyder is far less than Batman, even worse than Superman. I do dig Dawn of the Dead and Watchmen (for more thoughts on that see my review re: 300). But as far as his talents in the realm of storytelling, Snyder is not solid enough. On top of that, David S. Goyer is somebody whose career I find spotty. Increasingly over the past few years his talent in the realm of superheroes feels stale, and here he’s coupled with Argo screenwriter and first-time superhero writer Chris Terrio, which sort of boggles my mind but hey – when you write a good Affleck flick, maybe he’ll get you a job sometime.
Snyder alongside Goyer and Terrio’s writing amounts to a decent movie. Though one fraught with bad choices, too many threads jammed in solely so that the DC Cinematic Universe can start getting their pump on, and its length isn’t justified with strong enough storytelling.

One of the better parts about this movie? Holly Hunter. She’s great anyways, but her character is marvelous here. A worthy addition to a cast filled with some characters we never grow to care for or enjoy that much, outside of their action-worthiness. Of course there’s a bit of a timer on Hunter’s screenpresence, however, she leaves a nice mark.
While a lot of people like shitting on Jesse Eisenberg, I for one enjoy him. Sometimes. Here, I still can’t be sure if the problem with his Lex Luthor is his problem, or that of the writing. Goyer and Terrio make their Luthor into this manic, post-modern business kid verging on Asperger’s. Eisenberg absolutely brings an energy and charisma to the role, but something about the character and the performance is like a nagging, irritating glitch throughout so much of his screentime. It’s almost unbearable in a few scenes, honestly. Ultimately I enjoy Luthor’s purpose as a character here, I enjoy his despicable nature. Just not totally sure what’s wrong with the character and why I find him more grating than useful.
Cavill needs no praise. He’s one of the only reasons I enjoyed Man of Steel, and for someone like myself that never liked Superman as a character, even in comics, his charm and his old school Hollywood movie star affability make the character endearing. The one who impresses me most here is Affleck. I didn’t expect much, but he plays the slightly older, more grizzled veteran of superhero life. And he plays it well. The writing gives him a chance to be that cynical Batman from Frank Miller’s The Dark Knight Returns. Even if the writing is not as good as that novel, the character of Batman particularly is solid here for the most part.

The score is so impressive. That’s because my man Hans fucking Zimmer brought his talent to the table, also with help at times from Junkie XL, which is intriguing and fun. Zimmer is someone who always, even in movies that aren’t so great, makes me feel awestruck. His music feels so heavy, emotional. The use of Zimmer’s passacaglia technique is something I love, others say it’s too repetitive. The way Zimmer builds and builds, blasts, then goes back to building more, it draws us in, hooking on, and shaking us when the time is right.
One big problem I had with Snyder’s Man of Steel, which likely can be said about 300, is how the majority of its big action pieces were almost incomprehensibly CGI’d to death. Now I understand, we’re watching a movie about fictitious superheroes. But still, the essence of good film making is emotional resonance. Without enough character development I don’t care how many interesting CGI cities you can destroy, there’s just nothing more than mediocre about its excitement. But what Snyder, and the writers, do here is keep things a little smaller. Just slightly. Instead of Superman flying through buildings and the action going so fast barely even the colour in frame is definable, he and Batman have a pretty intense fight together, mainly just beating the hell out of one building. It’s the fact they keep things noticeable, the CGI isn’t as ugly and chaotic. There’s still a hell of a lot, but we can actually see things and pick out all the brutality of their clash.

And the whole Martha thing, I get, but really? REALLY? At that juncture of the film it is just an unbelievably sappy, sentimental writing decision. I get that they were fighting, Superman had no time to tell the Bat about anything, least of which his mother’s name. There’s a cheese-filled quality to letting this be the thing that stops Batman from doing Superman in/being Batman’s ultimate realization of the fact they need to unify.
Furthermore, to my mind it’s a bad choice to tell the story they did here. Major reason, for me, is that this is the first time Batman comes up against Supes, then all of a sudden he’s got him downed, almost beaten to death? Not in my books. I love Batman, as I’ve made clear. Not even big on Superman. But I refuse to believe Bruce is just going to be able to get the jump on him immediately. For a movie that runs an excruciating 151 minutes the screenplay doesn’t do service to the plots and stories it attempts telling. Also, it abandons most of its human drama after a certain point, which is understandable to a certain degree when we’re focusing on superheroes. Although, this feels unsatisfying because there’s a lot of wonderful sociopolitical elements to the drama where we begin the film, with Hunter’s character and the whole Senate hearing, so on. Shame there wasn’t more of that other than the military action later in the film.

Overall, Batman v Superman: Dawn of Justice is a mediocre piece of superhero cinema. The DC Cinematic Universe is off to a shaky leg start, as far as I’m concerned. Zack Snyder makes decent movies sometimes. This one is good enough. I can’t help wonder, though – how good could it have been? Could’ve been magical. Instead this first encounter between two major superheroes onscreen in a film is lukewarm. On the big screen it’s fun, sure. On the level of a proper film it’s only a midway effort. Boasting a couple good performances, some high-end action, you’ll enjoy yourself if a fan of comics or superhero movies. At the same time, like myself you may encounter aspects that don’t line up well enough with the stories you know and love. Either way, it’s a mixed bag. My opinion? They ought not bank on Snyder to carry these films past his next project. Bring in different blood, some different writers, see how things turn out. This was a disappointment in the end.