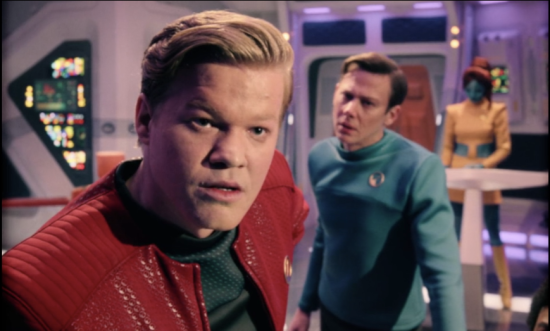 Captain Robert Daly (Jesse Plemons) leads the titular vessel, the U.S.S. Callister. His crew includes Walton (Jimmi Simpson), Shania (Michaela Coel), Tulaska (Milanka Brooks), and others. The whole thing is a bit of an homage to the old Star Trek TV series. Not necessarily a satire, but most certainly homage.
Soon, the Callister tracks down an enemy ship, firing on it. They’ve neutralised Baldak (Billy Magnussen), a nasty villain. One thing we see is that Captain Daly is revered, perhaps a bit too much. More like a king than a captain, a leader that shouldn’t be questioned, a leader who is the only one that can save them. He even smooches all the ladies on the deck.
However, it’s not real. Robert Daly works at Callister Inc. and doesn’t lead much of an exciting life. Elena Tulaska works on the desk. Nate Packer (Osy Ikhile) isn’t one of the ship’s crew, either. Nor is Shania. They’re all employees at Callister. In fact, Walton, the biggest ass kisser of the crew, is actually CEO, whereas Daly’s the CTO.
But then there’s Nanette Cole (Cristin Milioti), a coder at the company. She has lots of “admiration” for his “beautiful code.” She took a job there because of Daly, actually. So, what happens when the importance of virtual reality roleplaying leaks into real life? How does a guy like Robert deal with all that?

An old show, Space Fleet, is what inspires Robert’s virtual reality fantasies, it’s where the name of their company originated. We see more of how Walton is the cocky, brash frontman, while ole Bob is the “hardware” of their empire. Easy to see why Walton has his role on the U.S.S. Callister, now that we see what real life is like at the company.
Bob goes home at the end of the day, throws on the little game device at his temple, and he’s whisked back to the spaceship. Where he doesn’t take Walton’s shit, he wields his power like a tyrant. Everybody fears him. He is the ultimate ruler there in his head, in that virtual space. Nobody questions him. Walton is his personal ottoman where he rests his feet. Just a way to blow off steam, right?
Well, day-to-day at Callister Inc. it’s obvious people have a bit of an opinion about Bob, that he’s not exactly a boss at the company, that he can be a bit creepy, clingy, whatever. He’s a lonely man, obviously. Shania warns Nanette to give him a “wide berth” after the new employee fawns over Mr. Daly’s coding.
And y’know, it’s probably all for good reason. Bob snatches up an old coffee cup belonging to the admiring employee. He puts it into his system at home, which assimilates Nanette as a character in his virtual world. She’s now one of the crew members on the U.S.S. Callister. Oh, my. Could go a lot of ways. A lot of terrifying ways.

Nanette stumbles in to find the rest of the crew, they’re all drinking. They try explaining to her what’s going on, though it’s quite a bit to take in for the first time. Nanette recognises everybody. They don’t know exactly about what’s been happening in reality, the outside world. They try not to “pop her mind,” but it’s essentially the fact they’re inside Infinity, the virtual reality game from Callister. The space in which they exist is a “development mod,” so it’s a place they’re stuck, as copies, digital clones, where Mr. Daly controls every last little thing.
“It‘s a bubble universe ruled by an asshole god”
When Nanette refuses to play Bob’s game she finds herself with no face, choking for air. Gasping. Yet never quite dying. So cruel to watch. Finally, she submits to his will, she’ll play along. Because none of them have a choice, really. Later the crew goes on an away mission to a planet, looking for the villain Baldak who’s got a serious weapon, screaming madly on top of a cliff where he calls forth a nasty alien beast.

But just as it gets good the pizza guy shows up in the real world, causing Bob to pause the game. After he gets a slice, the game  begins once more. Baldak is shot from the cliff and things go on as they did before. Captain Daly prevails. They go back to the ship, celebrating, singing praise to their fearless leader. Bob goes in for a kiss from Nanette, she slaps him, then the game’s over. Daly is gone, and the rest kick back. We discover there’s no shitting or having sex, no genitals, not in Space Fleet. Very disturbing, weird stuff.
Nanette puts her expertise to use. She wants to try hacking the system, from the inside out. Can they escape from this little self-contained universe? Is it possible? She finds a way to send a message out, part of the Infinity system to invite a friend. So, she sends it to herself. It doesn’t make much sense. She asks Bob about it, seeing as how it comes from him. He passes it off. A wasted effort; damn!
This sends Bob back to virtual reality early, knowing his characters are trying to flee the U.S.S. Callister. He goes back to give a James T. Kirk-esque speech, before flipping out on his crew. Nanette admits to sending the message to herself. She then says he’s “sick.” This doesn’t sit well wit him, and soon he turns Shania into one of those awful creatures of his making as punishment.

The crew’s still trying to get free. But Walton explains it’s futile. He’s been there since the beginning, he was the “pet project” for Bob and his little universe. We also see that Walton’s little boy Tommy was copied into that place, as well. Dad was made to watch as his kid was ejected into outer space to decompress. That’s some cruel shit, Captain.
What this means is they’ve got to get and eradicate the items Daly used to clone them into that virtual world. Or else the coder can keep bringing his characters back, over and over again, no matter if they die in there.
Nanette and Captain Daly go down to investigate a planet, just the two of them. She begins trying to seduce him, taking off some clothes to go for a dip in a nearby lake. She’s able to get him down to his underwear, leaving Daly’s personal device vulnerable. They beam it back to the ship, getting access to Nanette’s Cloud, and the VERY PERSONAL PHOTOS therein. All a part of the Space Fleet crew’s plan.
In the real world, Nanette gets texts with blackmail pictures. An anonymous, disguised voice calls instructing her what to do. This lands her right outside Bob’s apartment. And before Captain Daly notices, his device is beamed back to the planet’s beach. Outside, a pizza is ordered to the door, taking Bob out of the game in a pause. Nanette sneaks into the apartment, just as she’s getting beamed back to the ship inside, too. At the apartment she grabs the DNA items in the fridge, signalling the crew in the U.S.S. Callister. And the crew leaves their captain on the beach, flying away.

But after a slice, Bob finds he’s alone on the planet once he can get back into the game. The Callister races for a wormhole in the “update vortex.” It’s a risky flight, taking through miles of meteors in a treacherous run. Simultaneously, Daly finds a rundown ship nearby, getting it back online to chase them.
Ship troubles send Walton on a selfless mission to try fixing things. He also patches over for a chat with Bob, to apologise for exploiting his genius. Before fixing the ship and telling the Captain: “Fuck you to death.”
The Callister goes hurtling towards the closing wormhole. They fly through it, into the Cloud and out of Daly’s system. The Captain is left stuck in his little universe, but they’ve escaped, finding their old friends safe, alive, their genitals intact. They’re free to sail the stars again.

Honestly, I don’t like the old Star Trek, and so knowing this was like an homage, I wasn’t all too thrilled over getting into this first episode of Season 4. Yet, as always, Brooker and Co. manage to surprise me. I had so much fun watching this one. Equal parts hilarious and unsettling, as is the case most of the time with Black Mirror.
“Arkangel” is the next episode, directed by Jodie Foster, no less!