As the Mad Hatter Jervis Tetch (Benedict Samuel) watches on from his basement cell, former Captain Barnes (Michael Chiklis) is being escorted by Arkham Asylum orderlies across the yard when he goes mad and breaks free of them. At the same time, one of the Court of Owls assassins comes for him, managing to stick him with a needle. What exactly is their plan for The Executioner? They need to “pass sentence” on a large scale. Therefore, they require the virus.
For that, they’ll need Hugo Strange (BD Wong).
At the GCPD, Dr. Lee Thompkins (Morena Baccarin) advises acting Captain Bullock (Donal Logue) she believes Frank Gordon was the victim of homicide, not suicide. She believes Dt. Jim Gordon (Ben McKenzie) needs to be questioned, she’s blinded by the death of her husband Mario. I worry that she’ll start poking around, finding out things she’s not meant to know; dangerous things.
With Gotham’s judgement “imminent,” the Court of Owls is preparing their sprawling plot. And amongst them, Jim has to try thwarting them without much suspicion.

Across the city, Ivy Pepper (Maggie Geha) is looking for Selina Kyle (Camren Bicondova). She goes to the Sirens, where Tabitha (Jessica Lucas) doesn’t give her much information, but she really wants to talk to Barbara (Erin Richards). Finally, she hears that the Cat fell from a window, so she may check the hospitals. I doubt Selina would go to one. It’s still worth a try, anyway. Ivy does find her friend, not in good shape; the Cat is in a coma.
Snooping around the court’s premises, Jim finds out everybody gets to write a list, of people they wish to spare during the coming purge of Gotham. In the book, our detective writes. I wonder whose name he wrote? Meanwhile, Strange has “weaponised the virus” to be sent across Gotham. Imagine what it could do to the city.
Up in the mountains, the Shaman (Raymond J. Barry) continues teaching young Bruce Wayne (David Mazouz). The billionaire is put through constant trials and struggles, fights, all to uncover himself. The Shaman tells him he must rid himself of the rage he feels over his parents death: “Rage and pain are two sides of the same coin.”
Jim gets a few prints from Kathryn’s mask, confirming she’s from one of the oldest families in Gotham. Harvey discovers her address. Now, our detective is thinking of breaking in, to try finding further info on the weapon from Indian Hill. Moreover, they’ve still got to deal with Lee’s prodding. At home, Jim gets a pop-in visit from Penguin (Robin Lord Taylor) and Firefly (Camila Perez). Oz has a good idea about what happened to Ed Nygma (Cory Michael Smith), so there’s A LOT of people with their eyes on the Court of Owls. Because now, the Penguin is willing to expose the court, unless he gets his hands on the Riddler. Oh, my.

Onward, Jim sneaks inside Kathryn’s brownstone. There he finds a box engraved with owls, plus a card with an access code for Wayne Enterprises. As usual, the detective’s luck has run out; Kathryn comes back early, discovering Jim. So, he brings her the situation re: Penguin and Riddler, then demands a “seat at the table.” This is when he begins sussing out more about the plan to rebuild Gotham, the weapon. Getting tense.
At the GCPD, Jim and Harvey get Lucius Fox (Chris Chalk) in on the plan. Their forensics smarty lets them know it definitely is possible to weaponise the Tetch virus. Then they put it together that Barnes was taken from the asylum, that’s how the court is getting their hands on the blood. More to go on.
In the mountains, Bruce follows the Shaman through more training. They must remove his pain and the rage inside him. Does he want to give it up? Has he gotten used to it? Nevertheless, the Shaman takes him back to the wake of his parents. The young man goes back through his thoughts, remembering people were so concerned about him, not about the murder of Thomas and Martha. What he must do, is lock the pain away, and move on from it. This will help him fight harder, better, more efficient.
Looking around Wayne Enterprises using the badge from Kathryn’s, Jim and Harvey find the makeshift lab the court was using. There, they find one of the patients driven mad by the Tetch virus. And guess who saves our lads? None other than Strange. The professor’s willing to give Kathryn up, he doesn’t even want to be there. But he only knows a few things, about the virus itself. Hugo gives them a “good will” gesture by showing them his research, a vial of the infected blood. Gotham’s always teetering on the edge of law and criminality. Sometimes the cops have to use the villains to their own aims, just how it goes! 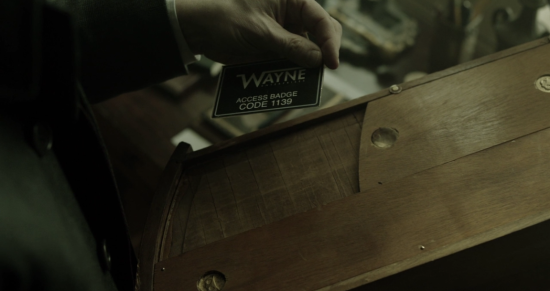 Let in on the court’s plans, Jim finds they’re planning to distribute the virus via an aerosol bomb. It’s all ready to go down, soon enough. They’re going to start by infecting a bunch of socialites and elites, testing out how well it works before they spread it over Gotham City. Shit’s about to get really nasty.
Rather than sit back, Gordon fights one of the court’s assassins, unwilling to just watch the city be destroyed brutally. Lucky for the detective he has new, freaky friends, including Penguin, as well as Firefly who takes out the assassin. Jim manages to get everybody out, just as the aerosol bomb detonates, sending the Tetch virus into the air.
Simultaneously, Kathryn gets a call from the Shaman, letting her know how things are going with Bruce, his supposed destiny. Looks like the billionaire is coming back to Gotham. Oh, and the Penguin? He’s been snatched up by the court, whisked to a cell in a dingy dungeon, where he and Ed are placed side by side, locked in darkness. Now THAT is something. But the scariest thing is that Kathryn’s discovered Jim, his betrayal, and she has a perfect plan for the detective: unleash The Executioner to kill him. Damn.

Something I love dearly about Gotham is that, while other similar shows often have downtime – whether comedic relief, romance, et cetera – Gotham keeps those things, but has them floating around in this constant mix of action and thriller sequences. There is, literally, never any rest. Just as it is for those in Gotham City; always something going on!
“All Will Be Judged” is next. Only a couple chapters left until Heroes Rise and Season 3 are done.