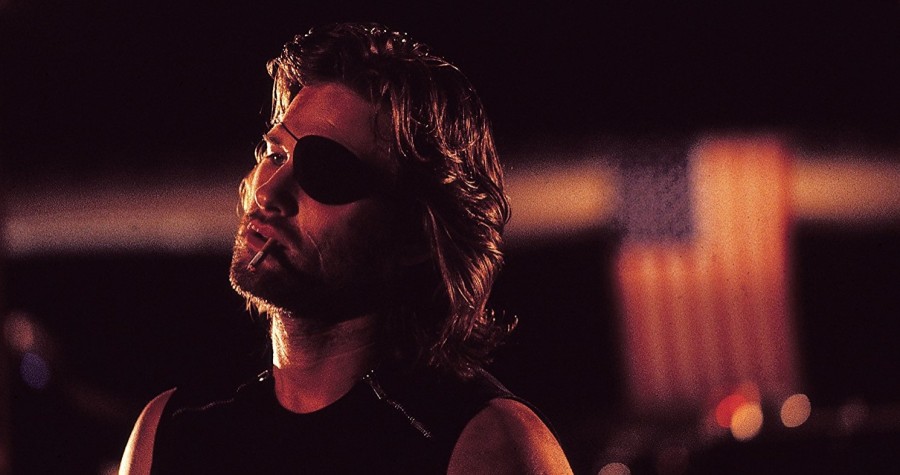 There are so many excellent visions of dystopian future out there from literature to film. John Carpenter imagined this 1981 vision of a near American future (1997) where violence has turned New York into one giant prison; a space where the police apparatus has lost its grip on a citizenry. Or rather, it’s an entire jungle, essentially with the prisoners left to their own devices inside the walls. Surely this screenplay from Carpenter and frequent collaborator Nick Castle came about in part due to their own anxieties, coming out of the ’70s, entering the ’80s with a new load of issues for a new decade + a new generation of American citizens.
In a time when New York may well have been at its most dangerous, or at least most volatile, Escape From New York came through with a nihilist vision of the city. Instead of a vision of the future that’s space-like and beyond futuristic Escape From New York makes us feel like this is a plausible America, one where the law barely has a grip on society and the lowest of the low controls the streets, carte blanche to do as they see fit. Strange how all sorts of the decades old dystopian science fiction seems more real when watching it now, as if all the predictions and ruminations were closer to the heart of things than anyone could’ve ever imagined.
Oh, and you’ve got all around bad ass Kurt Russell, Ernest Borgnine having a ball, Donald Pleasence playing an Englishman who inexplicably became POTUS, Isaacy Hayes, Harry Dean Stanton, Adrienne Barbeau, and the legendary Dean Cundey as Director of Photography; so, tell me – how exactly could this ever be anything but a cinematic classic?

“I don’t give a fuck about your war, or your president.”

When police and other law enforcement agencies lose control over the cities and the neighbourhoods, there’s a point of no return when the only hope is honour among criminals. Therein lies a juxtaposition.
After turning NY into a sprawling prison system, law enforcement has left the prisoners to their own devices, and then they end up at the mercy of Snake Plissken (Russell), whose own life outside the law prevents him from just giving into the plan without reluctance. So there comes a moment in the idea of dystopian futures the role of the law either changes, or finds itself completely eradicated. At its core, the fact the President’s only hope is Snake eats away at the ego and pride of law enforcement. In this sense, Snake is like an informant; cops often would rather take the credit themselves than admit some informant did their job. The deck’s stacked against Plissken at the start, which is why the whole thing is so damn interesting.
New York is transformed into a hyperviolent, dystopian nation state where increased militarisation has rendered the state a mess, so dangerous the police can’t handle it. In a sense, it’s the Wild West all over, where often the criminals were just as integral to a sense of judgement and justice as any of the law enforcement in the face of such rampant, unadulterated crime. Just like real America, the further ahead in history society moves, the farther back other things seem to adjust themselves through recession to a form of lawlessness.

“… a new economy and a new technology of the power to punish…”
– Michel Foucault
Discipline and Punish: The Birth of the Prison

On top of it, the prison system gets worse. We’ve got Hauk (Lee Van Cleef) recruiting a prisoner as labour for the state, yet it’s not pounding rocks or making license plates, it’s heading into a mass of violence while being blackmailed with violence, too. Snake isn’t volunteering to be a patriot, he’s forced to be one. And what a thing: forced patriotism. There’s plenty of that already in American society, such as the idea that you’ve got to salute the flag, you must sing the anthem, you must respect the inanimate symbolism of colonial America.
And that’s why Snake is such an endearing character. The war hero turned criminal; a disillusioned veteran who woke to the cruelty of his country. Snake’s akin to the Vietnam-era solder who’s seen his government’s ugliness up close and personal, returning to America just to find he’s hailed as hero only in name, which likely is why he turned to robbery. But now that his country needs something from him – again – they’ll draft him out of prison to put him back in the line of fire. He’s stop-lossed, in a way, like many young Americans during the lengthy fuckery since the Invasion of Iraq in the early 2000s; except he’s being stop-lossed out of jail back to active duty. More than that, Hauk’s fascist military pals inject Snake with visceral blackmail: a bomb, an explosive Foucaultian Panopticon monitoring him to make sure he accomplishes his task.
The prison state of NY is not as much a prison, so much as it’s actually a state where lawlessness and chaos rules. It’s symbolic of the government’s total failure in containing violence, crime, and it’s ultimately an admission of the fact they can no longer uphold law and order. In short, setting up this dystopian prison state is an inadvertent signaling of the deteriorating and fall of society. Although the government still holds economic control. Just think of that idea that Snake was, essentially, drafted into a war, which holds implications about the future structure of the prison-industrial complex. What if, instead of making prisoners work – already a form of new slavery and commodification of the imprisoned body – the American government were to begin drafting prisoners into fighting for the army in wars? As if the American prison system and many of the overall ideas intrinsic to the prison system in general anywhere weren’t bad enough, it could always get more horrifying. Such are the warnings of dystopian fiction. This is just another reason why the film’s so damn good. Carpenter and Castle don’t just deliver on interesting post-apocalyptic action, they’ve got the world-building to back it up.

The imagination and the vision of Carpenter is on display at all times throughout Escape from New York, from the envisioning of a futuristic police state in America to the low budget techniques that pay off so well in creating an unforgettable visual aesthetic. It’s difficult to pick a favourite Carpenter film for me, as each holds their own uniqueness, their very own respective lure, and a different look at what genre film is meant to be and do. At the same time, this masterpiece is absolutely at the top of the heap.
It’s fine to enjoy this as just a solid dystopian action story. But genuinely, there’s an important and penetrating discussion on what government, law, confinement, patriotism + many other other issues mean in America. This is further brought to the fore by Carpenter’s use of speculative science fiction elements, some of which aren’t even thrown in the viewer’s face. Subtle moments have their relevance, and have even inspired other artists such as author William Gibson and video game auteur Hideo Kojima.
So whether you’re looking for something to stimulate the feel-good glands, or to activate a dose of intellectual thought on the prison-industrial complex’s horrifying future – or both at once – Escape from New York is perhaps the best of the ’80s in that regard. Because nobody does it like Carpenter, especially considering he has help from his brooding, anti-hero action star extraordinaire Russell. Seriously, if you haven’t watched this in a while, remedy that. Forever one of the best, most original films made.