Bruce Wayne (David Mazouz) is looking for Jerome Valeska (Cameron Monaghan), but he’s only finding he’s a couple steps behind him, as well as Jervis Tetch (Benedict Samuel). This puts him in a bad spot when a man strapped with a bomb is hypnotised by the Mad Hatter. Harvey Bullock (Donal Logue) and Captain Jim Gordon (Jim McKenzie) soon arrive. But they’re not able to stop the tick tick tock of the Hatter’s clock, and eventually: BOOM!
All the villains are having dinner together. Jerome has gathered a “legion of horribles” for his “mandatory brunch meeting,” including Penguin (Robin Lord Taylor), Scarecrow (David W. Thompson), Firefly (Michelle Veintimilla), and Mr. Freeze (Nathan Darrow). They’re plotting their latest terror for Gotham City.
We’re seeing that Cpt. Gordon is at an impasse with young Bruce, trying to keep him out of harm’s way yet always finding the kid turning up where he shouldn’t be, so this leaves Jim with no other choice but to threaten actually charging him next time if it happens again. Although Gotham exists in a heightened universe, sometimes it’s nice to see characters and situations adhere to some realistic rules once and a while.

“I’m an artist. I just wanna paint the town crazy.”

Up in an elite board meeting, Jerome’s looking for a man named Xander Wilde. The “clown boy” is interrupted by Bullock and Gordon, yet they’re no match for the flame power of Firefly. This leaves a crime scene for the GCPD to analyse, but they’re no further towards stopping Jerome and the crew of supervillains. No other leads than trying to track Wilde. From the plans of Wayne Plaza, we see that Wilde was an architectural engineer. So, back to Mr. Wayne it is!
Down in the Narrows, the Riddler (Cory Michael Smith) takes centre stage at the newly christened Riddle Factory. Nygma introduces a contestant for his game of riddles. The man doesn’t answer the riddle correctly, ad what does that mean? The “wheel of misfortune,” that’s what. This contestant lands on a rabid sack of rats. Sounds positively delightful. In the middle of it all, Dr. Lee Thompkins (Morena Baccarin) breaks the fun up. That is, until the Riddler says fuck that. It only prompts Lee to challenge Ed to a game. And if she wins, he has to shut the Riddle Factory down. Oh, man. This could get REAL interesting.
At a bar, Penguin goes to see Butch (Drew Powell) after so much time has passed. He mentions Jerome’s “plans for Gotham.” He also believes it’s only a matter of time before Jerome passes like a fad. Sort of stupid of Oz to think Butch would ever work with him again.
At Wayne Manor, Alfred (Sean Pertwee) tries helping out Cpt. Gordon by checking the notes of Thomas Wayne. A book concerning Wayne Plaza has Wilde’s name in it.

What about Jerome? He’s not doing so hot, as usual. He’s pretty well used to being in awful situations, whether they involve brutal physical pain or prison-like confinement. He’s currently being held somewhere, monitored by the mysterious Xander Wilde.
Meanwhile, Jim and Harvey have tracked down the bunker where Wilde lives. The place is looked after by a Ms. Ecco (Francesca Root-Dodson). So, who exactly is Mr. Wilde? He’s an identical twin of Jerome. His real name is actually Jeremiah, and he recounts how it was like “living in a nightmare” being around Jerome when they were younger, so he wound up leaving home. Eventually, Jim and Harvey find the monitors where the villain’s being kept by his forcibly reclusive brother.
Back to the Riddle Factory. Lee’s given her riddle. She tricks the real Ed underneath the Riddler’s persona into giving her the answer. She beats the first round of his silly little game, and some of the crowd’s pleased enough with the result.
While Jeremiah is refusing to give up the location of Jerome, there are bigger problems. The villains turn up. They’ve shut off the power. Now, Jeremiah has to lead Harvey and Jim into his own personal maze with “seventy–three dead ends.” Clearly he can take the through, however, they come across a hypnotised Ecco, and the narrow halls of the labyrinth become like the UFC cage. Ecco gets hold of Jeremiah, which causes more chaos, though Jim finally gets the upper hand.
But Jeremiah is off on his own, where he runs into a now free Jerome, the Hatter, and Scarecrow. The brothers face one another after many years. Not a nice reunion. We discover Jerome killed his mom, too. Jim and Harvey rush in after some time, only to find Jerome gets away once more.

“We all could go insane with just one bad day”

Using a simple riddle, Lee tries to make the Riddler say ‘I love you.’ But he refuses. Because he knows he loves her. Then the time of this round of riddles is up. He’s lost. He wants to deny his feelings, but simply can’t, not when Lee wants to join forces with him to take Gotham by storm.
At the GCPD, Jeremiah is placed in protective police custody. Yet nowhere in Gotham is ever truly, totally safe, is it? Not with the Scarecrow, Jerome, and the rest of the villains out there plotting. They’ve also got Butch aka Grundy on their team now. Not to mention Crane’s got some nasty new potion worked up. The next step towards rendering Gotham City entirely mad. LET THE LAUGHTER COMMENCE! 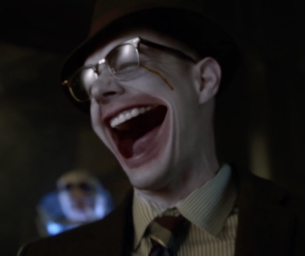 Fantastic episode! Cameron Monaghan, as usual, shows off impressive acting chops. His dual role is particularly excellent because the two brothers are vastly different personalities. Perfect juxtaposition. The end of the episode also = horrifying. Dig it. Can’t wait for more madness, as we’re getting closer and closer to the end of Season 4. Time flies.
“That’s Entertainment” comes next time.