Frankie (Dichen Lachman) does her job driving the medical transport truck, getting past all the necessary checkpoints. All the stuff from the back is loaded out, onto the plane along with money from an armoured transport arriving at the same time, accompanied by armed guards. This puts J (Finn Cole) and Deran (Jake Weary), inside those boxes, in there with only one man + an assault rifle. Elsewhere, Billy (Denis Leary) gets a text from Frankie to let them know the plane’s taken off. This sends him, Craig (Ben Robson), and an angry, distracted Pope (Shawn Hatosy) at the wheel, tracking the plane’s journey from the ground.
When J and Deran are ready, they get out of their boxes. They get their masks on and head for the guard. At gunpoint he’s cable-tied to the frame of the plane, and then the boys take the pilot and the plane. What seemed a little weed heist at first has gradually developed into possibly the largest, most serious heist the Cody gang’s ever pulled.
Then there’s Smurf (Ellen Barkin), being taken home by Dt. Pearce (Gil Birmingham). She’s having a chat with her old cop pal. And she doesn’t really like much of what he has to say. Mostly it makes her feel old and forgotten by her family. She passes it off, as she does with all the other men who try to control her life. But there’s truth in what Pearce has to say, at least a smidgen. 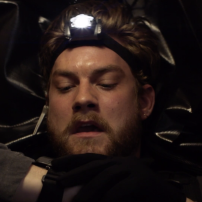 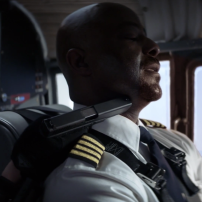 “They don’t need you. I don’t think they even want you.”

Shitty times on the road with Pope and Billy. The past keeps getting dredged up. Such as young Andrew being locked in a closet while Billy went to score dope, left alone without food or water for nearly two whole days. The older of the two has lots of excuses. Although Smurf’s not without blame, despite the likely many terrible father figures and masculine influences throughout his life— and those were all trotted through by his mother, who corrupted him terribly. Nonetheless, Billy’s a shit stain of a man and a human being in general, no doubt about that one. And there’s nothing but the lads to do but wait.
Up in the air, Deran and J are hard at work. Then, they’re jumping free with their loot, doing a bit of wingsuit flying. They have to “make up some distance” after missing their drop point. This winds up putting J down hard. Overall they do a decent job at, y’know, not dying. Problem is they’re “48 miles” from that drop point. Stranded in the desert, no cell reception. They bury everything, worried this detour will get them pinched by the cops. A royal fuck up.
Back at the house, Smurf meets Frankie, home alone. Interesting, though, after Frankie offers to do the laundry, as well as offering up a bit of lotion for grandma’s blackened eye. She wants to help out, considering the woman’s just gotten out of prison. Might not hurt for her to be nice, either. Smurf and Billy’s history is obviously nasty.
J and Deran walk until they find a small house. A woman there offers a drink, telling them it’s another 20 miles for a phone. She offers them a ride— for “ten grand.” She knows there’s something shady about these dudes showing up out there. Deran decides to show off his gun, but he’s not horrible enough to shoot a mom in front of her children. Puts them in a compromised position.

On the road, Billy starts to get extremely personal with Pope. First he starts with mentioning that Pope was in “diapers until he was six.” Then he starts insinuating an incestuous relationship between mother and son. He mentions “little Pope staring” at them while they were having sex in his mom’s room. This makes Pope pull over and toss Billy to the side of the road before leaving him on his own.
Smurf has herself a nice bath with essential oils to wash off the grime of prison. Then Frankie makes her a vodka-cran. They talk a bit, get slightly personal. The younger woman talks about her upbringing, though it’s fairly uncomfortable between them. And Smurf’s always sceptical, anyway. She’s never not looking for the hidden face behind the masks people put up.
Later on, Pope makes the suggestion to Craig that their mom killed Baz. Younger brother doesn’t want to believe it. Their conversation’s interrupted when the woman from the desert drops Deran and J off. Nobody’s happy, it’s all fucked up a bit. Deran doesn’t dig that Billy was kicked out of the vehicle, and Pope isn’t thrilled to see some random woman on the scene.
The boys have got a good setup at a high-tech security storage place. It’s all cell phone linked. That doesn’t seem totally perfect, though it’s better than regular locks in a way, I guess. They’re all splitting up the cash, also trying to figure out how much to siphon off for Billy so that he doesn’t turn up heat on them. Afterwards, Pope brings up Lena’s “cut.” He thinks Baz is being forgotten. Everybody agrees he isn’t, so they make sure to set some aside for his daughter.
Once it’s all settled, Billy is back at the bar trying to divide the brothers further, telling Deran not to do more jobs with Pope. He’s glad to hear about the huge score. Only he’ll want his pay, and I’ve got a feeling he’s not going to be chill about it. A junkie like him isn’t the right person to have done a job with them, not this size. Could definitely mean trouble. Plus, now he and everybody else are discovering something bigger: Smurf is out of prison.

A sketchy reunion, after J, Pope, and Craig find Smurf in the kitchen cooking. Creepy kisses from mom/grandma, too. Lots of those unsettling incestuous undertones, now directed at J. Her old toy, Pope, gets a less warm greeting, as her son keeps questioning whether she had something to do with the death of Baz.
Billy claims, to Deran, he tried taking him to Reno years before, running away together. He says Smurf “called the feds” and then the deal was that Billy had to leave, never come back, then there’d be no charges. Most certainly a bullshit slice of history from a thieving, deceiving junkie like him. An attempt to wedge more divide between the brothers.
Back home, the family’s having dinner. Like old times. Just with plenty of new resentments and anger. Smurf can’t wait to see her old flame Billy, probably waiting to kick his ass. She’s asking about how things have been, including where Nicky (Molly Gordon) went, and so on. Plenty of shitty stories to share around the supper table!

A fantastic episode that brings the darkness back up another big notch going forward. Can’t wait to see what happens next with Smurf out of the can. Especially re: her + Pope. Gonna get interesting, and wild.
“Incoming” is next time.