We hear Penguin’s (Robin Lord Taylor) sycophantic choir singing a hymn for the great leader of Gotham’s streets: “Penguin, Our Hero.” It’s like living in a fascist fantasy. Cobblepot cracks the whip at the “bullet factory” while denying people food. He’s the ultimate authoritarian capitalist. He’s also hearing about Captain Jim Gordon’s (Ben McKenzie) work and the place called Haven, where the GCPD are protecting the displaced citizens, particularly the kids. Suddenly, Penguin’s day is interrupted when a couple of the Street Demonz turn up, believing him responsible for the recent massacre. So now he’s aware somebody’s out there trying to frame him and cause chaos.
Selina Kyle (Camren Bicondova) isn’t doing well simply because she isn’t paralysed for life. She has terrifying nightmares about Jeremiah (Cameron Monaghan) shooting her— the trauma lingers. What can she do? She heads back out into the streets, donning her cowl and claws. But is that really a good idea? Bruce Wayne (David Mazouz) isn’t so sure. That doesn’t matter, because Selina does whatever she wants, and she wants to hunt the man who shot her.
Everything at Haven isn’t perfect, either. Jim is barely sleeping, and Harvey Bullock (Donal Logue) worries about him. They’re trying to do a delicate balancing act, helping the citizens of the city ad also having to fend off the various gangs fighting for control of Gotham. On top of it all, the government’s abandoned the city. Law and order still reigns under Cpt. Gordon for now: “In Haven, we help each other survive.”

Together, Bruce and Selina go looking for Jeremiah. They hear about rumours of him in the Dark Zone. Some say he’s out there “gathering followers.” A scared man warns of going to the Dark Zone, showing them the brutal violence one of his own friends experienced at the hands of the insane who occupy the streets there.
Things are better elsewhere, so Penguin discovers his disciples have all left. This only angers him further about Cpt. Gordon, meaning he has to shift alliances all over again, as usual. He wants to use the Street Demonz. They head directly for Haven, which alerts the GCPD. Things are looking bad. That is, if Jim can’t get a helping hand.
In the Dark Zone, Bruce and Selina quickly see how horrible things have gotten. Gangs run the streets. The pair see a man get blown to bits by an explosive strapped to him. Then, they’re confronted by a huge man— looks like the the Mutant Leader from The Dark Knight Returns. This pits the Bat and the Cat against the “schoolyard‘s biggest bully” and his friends, giving Ms. Kyle a chance to see what her recovery’s done for those fighting skills. She manages to get info on Jeremiah’s possible location, at the same time nearly killing the gang’s leader before Bruce stops her.
Jim and the GCPD are waiting when Penguin and the Street Demonz get to Haven. The tense situation gets more tenser when Cpt. Gordon proves he isn’t playing games. They’re in a stand-off, yet Cobblepot believes his old pal is bluffing and low on ammo. And when the cops do run out of bullets, they’re forced to stand down.
Bruce and Selina find a church where people worship Jeremiah. The place is run by Ecco (Francesca Root-Dodson) behind her eerie mask, wearing those Harley Quinn-like colours, too. She has a congregation, several of whom are supposedly going to go meet the “man himself.” Is Jeremiah actually there? 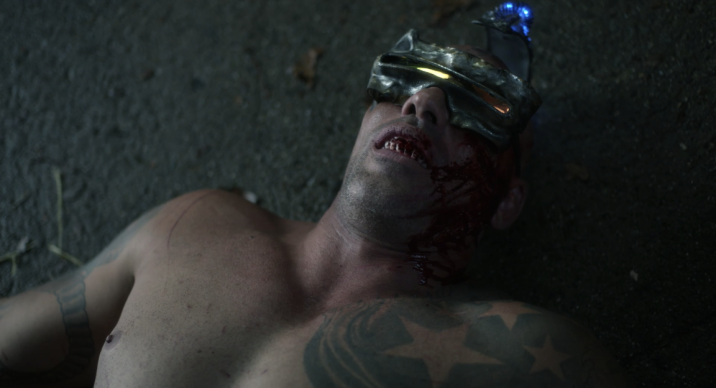 “The only law in Gotham is power”

Everything’s going sideways for Penguin, whose alliance with the Street Demonz is thin and disappears once they’ve got their hands on guns and ammunition again. Oswald finds he’s tossed in a cage like everyone else at Haven, pistol whipped, and humiliated. He gets to room in a cage with Jim. Meanwhile, Harvey’s across town looking for Barbara Kean (Erin Richards), hoping she’ll help him get the cap out of hot water. She’ll do anything for a shot at Oz. Although Jim and Penguin handle things on their own, working together. Once it’s over, people worship Penguin for shooting some bikers, yet Jim rallies his people at Haven together as one.
Selina and a bunch of Jeremiah followers are led to a bloody swimming pool. They must give a “show of faith.” They’re presented with a bunch of guns, each with a bullet. Elsewhere, Bruce sees the remnants of one of these horrific games— a bunch of people with holes in their heads. All the “little pilgrims” are lined up. They put guns to the next person’s head, then they all must fire. Selina doesn’t let the guy behind her pull his trigger, as if her reflexes aren’t even in her control (are they?). This leaves Ecco unhappy with the results. She actually knows Selina already, revealing she knows all about Bruce and every aspect of his life. While the two fight, Ecco even calls her “puddin‘” to allude more to her Harley Quinn influence (those pesky DC rights are saved for the movies), but she ultimately gets away from the Cat. Afterwards, Selina cuffs Bruce, leaving him there, and she runs off to search for Jeremiah, and hopefully KILL him. She knows Bruce wouldn’t let her, so she has to get creative.
Seems Jim and Penguin have settled their beef— right as Barbara comes to kill her nemesis. In the midst of their angry debate, an explosion rocks Haven, devastating the buildings around Cpt. Gordon. No more safety in Gotham: not at Haven or anyplace else.

Great episode! Season 5 is chugging along perfectly. Exciting references to the comics, like the Street Demonz from the No Man’s Land storyline, and even though Ecco’s not Harley Quinn in name she’s a thrilling version, not to mention she’s not technically tied to the character so it might offer a different interpretation instead of a copy of previous performances.
“Ruin” is next time. Expect lots of fallout from the explosion!