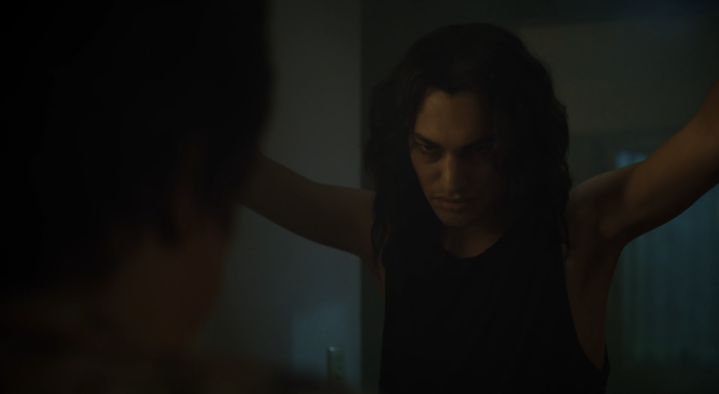 This episode starts with “Flesh for Fantasy” by Billy Idol.
We’re in 1985. Idol’s music is pumping loud out of a nearby room, keeping neighbours up. A woman takes it upon herself to go knock on the door. They’re going to Disneyland in the morning. They don’t want to be kept up. Not god that it’s Richard Ramirez staying in the other room. Although the woman makes it out alive, she only does so because of Richter, who’s staying there, too. Mr. Jingles needs his rest. These guys are like the serial killer odd couple. Jingles doesn’t dig being the sidekick anymore after a year. Ramirez has murdered “eleven” people. He’s keeping Richter as Satan’s bitch. So no way out for the big guy.

Awesome needle drop here as Ramirez puts on “Paranoid” by Black Sabbath and we see a nasty bit of killing. Meanwhile, Richter’s standing by, watching. When he’s alone he puts on some REO Speedwagon. And in general, he sort of just exists while the Night Crawler continues on his warpath. Until he decides to pick up a paper and tip people off. This leads to a scene that’s actually exactly like how Ramirez was caught in real life. Perfect time for Jingles to drive by drinking a can of TAB and blasting Speedwagon. AMAZING! Honestly. Others can feel how they want. It’s moments like these where Father Gore feels American Horror Story nails what they’re doing perfectly, crossing their fictional version of Ramirez with actual pieces of the real killer’s life, all with a Murphy & Falchuk shit-eating grin. Love it.

A guy in the woods is wandering around taking pictures at the old Camp Redwood grounds. It’s 1989. People clearly bought fully into Brooke’s guilt— spray paint reads BROOKE WANTS YOUR BLOOD on the decrepit sign out front. Photo guy does more wandering, looking for good shots to take. He stumbles onto Montana sunbathing by the water. She flirts with his fanny pack a bit. After that, she stabs the guy to death. Others from 1970 are bored by the killing. Montana and Xavier’s blood lust has only just started. Ray isn’t a fan of it, either. He’s also the only one troubled when they see Brooke— a.k.a the Camp Slayer— is going to be executed.

Then there’s Margaret, who’s spun things into gold. She’s not only a secret homicidal maniac, she’s become a “real estate mogul” who specialises in wild, macabre listings, such as John Wayne Gacy’s house, or Briarcliff Manor— yes, that one— the Winchester Mystery House, and Spahn Ranch. Plus, Marg has her still living boy toy, Trevor. He’s not exactly sold on their whole picture perfect life, which is only picture perfect for the cameras. At home, the couple aren’t so much a couple. She keeps a pretty tight leash.
In 1985, Trevor woke up in the hospital. He asked for Margaret to come see him. He knew what really happened. Then he decided to play his odds. He used it to get a “wealthy sugar mama.” This likewise meant he’d have to play the role of devoted husband. Now, in ’89, Trevor wants out of their bargain. Yet they keep fucking.

And while they live their lives, Brooke is now at the end of the line. She ends up at San Quentin, on the same block as Ramirez. There, she has to deal with his taunting, even if she gives it back pretty good. Ramirez uses his witchy powers to offer Brooke a deal with his master, Satan.
Margaret and her business partner Courtney (Leslie Jordan) have been having issues with houses lately. People think what they’re doing is disrespect to the dead. And it is! But that wouldn’t stop a psychotic like Marg. Then they find out there’s been more murder at one of their other properties: the grounds of old Camp Redwood. Courtney figures it’s bad news, whereas Marg has plans.

In Alaska, Benjamin’s got a wife, and a child. He goes by the name Donald. He works at Videoshack. He tries to live a normal life. His wife, Lorraine, was a sex worker. He was a murderer. They’re both trying to get on with life, forget the past. Donald may even be up for a promotion.
Back at Camp Redwood, Margaret is announcing a food and music fest. True crime capitalism. They’re offering the cabins where the massacre(s) happened to stay in, and they’re selling it as an immersive experience. Chet’s waiting in the woods, wanting to kill Margaret, but Montana tells him to wait— there’ll be plenty of murder to come. It’s all being announced on TV. That’s how Donald sees it in Alaska. Can he resist the lure of Camp Redwood?
What about Ramirez? Billy Idol’s going to play at the festival.
Will the Night Stalker find a way to get out and head back there?

Tonight is the night Brooke Thompson is slated to die by the state’s hand. Ramirez is busy asking for a “shot at immortality.” He offers a “rain of souls” to his master, if only he’ll be let out of that cage to do horrifying things. In the execution chamber, Brooke spits at Margaret, knowing she’s out there watching, and she lies back to accept her lethal injection. Marg watches on with sick enjoyment as the needle’s placed in Brooke’s arm. At the very same time, Ramirez is conducting a ritual. Black smoke is seeping through the drainage system to possess a prison guard. This is how Richard gets out.
Inside, Brooke’s officially declared dead. It’s all over. Only… it’s not. Nurse Rita a.k.a Donna has brought her back “to the land of the living” with a quick injection, having been behind the executioner’s robes the entire time.

That night, Donald gets home to see that his wife Lorraine’s been butchered.
Coincidence? Nah. Ramirez is trying to draw out Mr. Jingles.
So Richter leaves his child Bobby with Lorraine’s sister. He’s going back home.

“I don’t wanna fade…
I wanna be immortal.” A wild episode for the 100th! It was worth it simply for the Ramirez scene at the beginning, mirroring his real capture. So much madness happening. Nice to see the last few episodes are going to interesting places. Father Gore’s loving this season.

“The Lady in White” is next time.