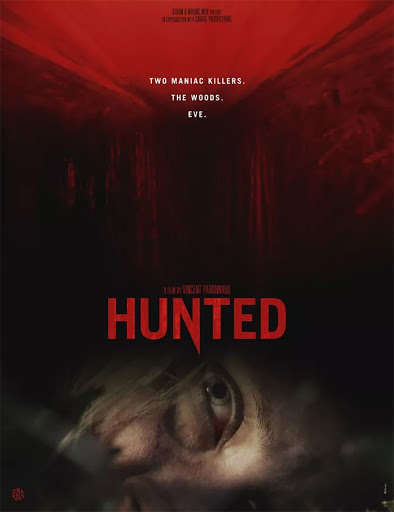 DISCLAIMER: The following essay contains SPOILERS!
Turn back, lest ye be spoiled.

Vincent Paronnaud is an endlessly interesting artist. He’s first and foremost a comics guy, having done a number of one-shots. This made him a natural to team up with the fabulous Marjane Satrapi for a film adaptation of her autobiographical comics Persepolis. They later did Chicken with Plums together. So it’s interesting to see Paronnaud’s latest effort, directing solo, is a horror-thriller that on paper reads like a story we’ve seen a hundred times before. Hunted is structured like a rape-revenge film, and has many of the same beats as one. Thankfully: no rape. Better still, the conventional trappings of this dreaded horror sub-genre— one only lately being challenged properly via films made by women, like Coralie Fargeat’s fabulous Revenge— are subverted in fresh, fun ways.

Paronnaud’s story, co-written with Léa Pernollet, follows Eve (Lucie Debay). She’s a normal woman whose night out on the town goes from bad to worse after a guy saves her from a douchebag, only to discover later they were working together. Although Eve gets away from the men initially she quickly comes to the terrifying realisation they’re not letting her go.
And she’s being hunted.

The premise isn’t anything original, but artists don’t have to reinvent the wheel to be clever or interesting. Paronnaud and Pernollet’s screenplay avoids the typical need for this sort of film to depict female pain in order for their later violent triumphs to somehow be earned. It doesn’t predicate Eve’s strength on being a survivor: women don’t need to be assaulted to become warriors, they can just BE warriors. While Eve’s a strong character the narrative focuses less on a transformation in her in order to survive, given she’s already a bad ass with smart instincts. The film looks more at the misogyny and desperate sadness in the heart of men— animals— who’d try to sexually assault a woman in the first place. The film isn’t simply about the potential for women’s revenge against hideous men, it’s about dismantling the toxic masculinity that creates such men in the first place, and taking a step back towards Mother Nature instead.

Cosmogony, which was an earlier title for the film, is a great view into the story’s themes. This existential aspect begins with the campfire story told by the older woman, explaining the ways of the world to her boy. The wolves she talks about are the embodiment of man as animal, and the screenplay really tackles misogyny. Misogyny has been part of human existence since the very first man decided he’d try to control a woman and her body. And, as cosmogony deals with the origin of the universe, so have misogyny and sexism been around since the dawn of time.

If anything the general struggle between men and women has been an eternal one. This mashup of gender struggle and cosmogony sets up the brutal, night-long fight between Eve and her own personal iteration of the Big Bad Wolf (Arieh Worthalter)— whom I’ll refer to mostly as the Wolf from here— playing out like the insufferable cyclical war between women and predatory men. Similarly, on an eco-existential level, Eve gets help from Mother Nature while going up against the Wolf, suggesting a link between women and the natural world.

Mother Nature is an important piece of the film. The final chase and fight between Eve and her Big Bad Wolf winds up in a new subdivision in a home for sale. This feels symbolic of domestic violence and how the animalistic side of man isn’t civilised by marriage or family, or anything for that matter. There’s a brief Jack and Wendy Torrance homage in this scene, again connecting with images of domestic violence from The Shining, not to mention Jack’s ‘I’ll huff and I’ll puff’ moment before chopping down the door to get at his wife. All this effectively mirrors the film’s opening with the older woman’s story of the wolves, paralleled by the chase between Eve and the Wolf going from rural forest into the urban. Also works as an allegory of how we move away from nature the further into modernity we get, we build new subdivision after new subdivision and use up Mother Nature while giving little to nothing back. We also continue to carry those primitive instincts into modernity with us rather than shedding them and evolving. Perhaps a better parallel for men than wolves would be cavemen.

“It’s efficiency at all costs”

With a theme concerning misogyny the choice of Eve for the protagonist’s name isn’t random. Eve, in the Biblical sense, is a frequent and ancient target of misogyny. She’s the great scapegoat of Christianity, most often blamed solely for original sin and used as an excuse to subjugate women with religious authority. Connecting our protagonist Eve with her Biblical counterpart makes more sense later in the film after the Big Bad Wolf’s young companion gets wounded and he puts his finger in it. This image is a direct reference to the Biblical doubting Thomas, the Apostle Thomas. Except here the disbelief of the Wolf towards his companion is of a more masculine nature. It serves to show how toxic the Wolf’s attitudes are, refusing to belief his fellow male partner in crime is actually hurt until touching the wound, just like Thomas needing to touch the physical wounds of Jesus to believe in Christ’s resurrection.
Much more blatant, and important to the woman vs. man as wolf theme, is the Little Red Riding Hood imagery. Eve wears her red jacket that depicts her as the eponymous fairy tale character who eventually has to go up against the Big Bad Wolf. She requires no Huntsman to save her and chop up the Wolf, more than willing to take on the symbolic chopping herself. And all Little Red wanted to do was go to the club!

Hunted is primarily about dangerous masculinity, starting from the beginning with the old woman’s story about Nicodemus and the wolves. The film presents an overall metaphor of man as wolf. Worse, man turns out to be more primitive and vicious than wolves. Man has moved from the forest to the city over the course of history, yet his behaviour’s only gotten worse. We’ve domesticated wolves into house pets and strays sleeping on the hard city concrete, so why can’t we, as a society, tame man, too? Because we live in a patriarchal society that doesn’t want to tame man, it needs man on his worst behaviour in order to uphold patriarchy, as well as the other systems that in turn uphold it, such as misogyny, sexism, so on. That’s why these systems are bred into and passed onto our children, the next generation(s), to ensure their survival.

We see a representation of this passing on of toxic masculine values from one generation to the next when we watch the supposed alpha Wolf preying on younger potential wolves to be his new beta. Particularly he preys on the older woman’s boy. The first thing he says to the kid is call women “sluts” and ask if he’s watching pornography, spinning this into a misogynistic speech about being a man. There’s also a lot of insecurity in the Big Bad Wolf regarding sexuality, as if he’s grappling with his own, trapped by the strict tenets of toxic masculinity. He asks his companion earlier to kiss him in a moment of forceful homoeroticism. When he meets the older woman’s son he equates the kid having no immediate interest in porn with being gay. This all mirrors real life relationships between boys and their fathers/uncles/general father figures who hand down the wrong, toxic life lessons, creating new packs(/generations) of wolves. In the end, the Wolf comes off more like the Big Sad Wolf than anything, a pathetic creature that’s let his own behaviour destroy himself and those around him.

Paronnaud’s film subverts expectations in the best kind of ways. It’s a slick horror-thriller with plenty of excitement. Certainly doesn’t hurt that Lucie Debay and Arieh Worthalter, both of whom carry the vast majority of screentime, are fascinating in their respective roles. Debay’s Eve starts off feeling like a timid woman only to reveal herself as a ruthless warrior while Worthalter’s ‘Wolf’ is charming and handsome before he becomes an abject monster. Their chemistry makes this cat-and-mouse scenario as enjoyable to watch as it is positively stressful.

Hunted ultimately works so well because it offers the horrific tension of a rape-revenge film with no need for the actual rape, which is always difficult for anybody to watch, let alone viewers with a history of abuse or trauma from their own sexual assaults. And, again, Eve is allowed to be a warrior woman without needing to be transformed by an act of sexual violence— an unfortunate cookie-cutter formula in the vast majority of rape-revenge stories. These modified elements make for a better product than all those I Spit On Your Grave knockoffs out there combined. While the rape-revenge subgenre posits itself as one that depicts women reclaiming their bodies through violent acts of power, Paronnaud’s film depicts the capability of women to exert their natural power in defending themselves against violent men without needing tragedy to birth it.