AMC’s The Walking Dead: World Beyond
1×02: “The Blaze of Gory”
Directed by Magnus Martens
Written by Ben Sokolowski 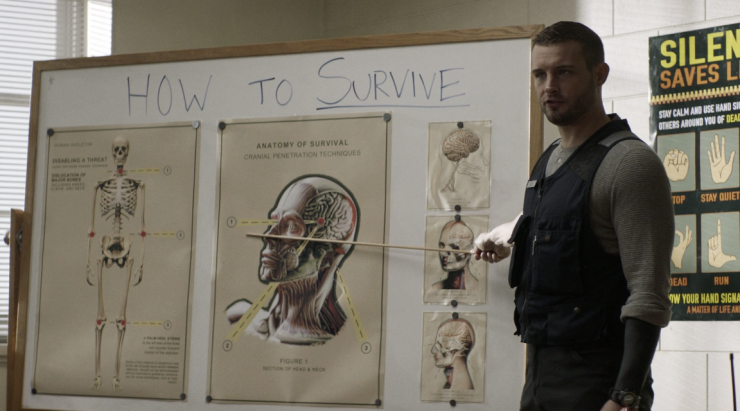 Hope remembers her mother fondly. She also remembers killing that woman who killed her mother. Not easy memories to reconcile, especially when you’re living in a post-zombie apocalypse wasteland. Hope and Iris are learning to fend for themselves outside the walls of their community. They’ve learned plenty from Felix, who’s taught many young people at the campus colony to fight walkers. Unfortunately there are things you can’t predict, which is what Iris figures out while battling one particularly tough zombie, falling into a ravine. Luckily she doesn’t hurt herself. Maybe one of the more realistic scenes in The Walking Dead’s universe when Iris throws up all over the zombie. They all leave, though not before Hope tells the undead creature: “Sorry.”

Felix and Huck are off on the road trying to track the kids. He wonders why the girls’ father would risk everything, and the Alliance, to send the messages he sent to them. Felix is seriously questioning the Civic Republic while Huck doesn’t question them so much. He knows it’s all a bit troubling. We also get a view into Felix’s past with his father, being confronted about being gay. Dad immediately kicked him out of the house, rejecting him in every possible way. Absolutely devastating. 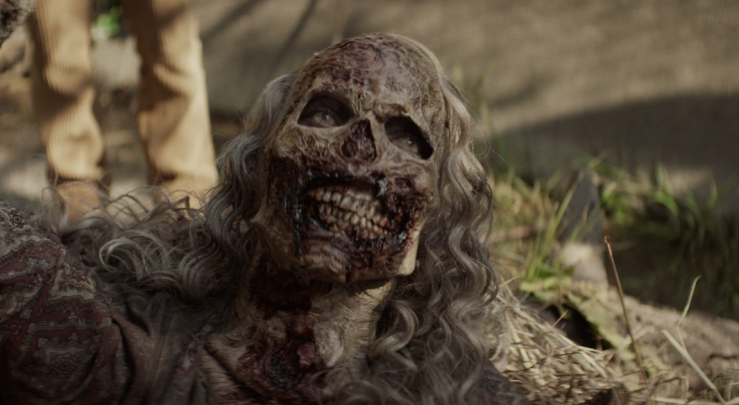 Hope and Elton bond over their shared nonchalance about the world ending. They each seem to have a grip on it, compared to others. Then the group notice smoke billowing up from the distance. Apparently it’s the “blaze of gory,” an “everlasting fire of totally Old Testament proportions.” Some say it’s tires left burning. Empties have been attracted to it for years. The blaze attracts more and more of them, and it gets louder. Iris is sure they can get through it, but Hope’s more sceptical.

One of the coolest zombies in YEARS appears when the kids come across an empty sitting on a bench, its head and shoulders one big bee hive. The thing opens its mouth and releases the bees inside. They get in a spot of trouble when more zombies show up, and Silas can’t bring himself to clobber one with his big wrench when Elton’s in trouble. They get out of there safely, and Iris tells Silas not to beat himself up over not taking action. A little later, the group finds a tree house where they can spend the night safely off the ground, away from chomping teeth. That night, the zombie Silas couldn’t kill makes its way to the tree house. They try killing it with a bowling ball, only smashing its face in a bit. They figure it’ll leave eventually, so they distract themselves with a game of Monopoly.
During the night when everyone’s asleep, Hope grabs a doll, lights it on fire, then uses it to distract the zombie below. She takes this time to jump down to the ground and face the zombie herself. She draws it away from there and to a nearby pool. The empty goes spilling into the pool, but Hope nearly does, too. She manages to climb out, leaving the thing trapped. A close one.

Felix and Huck aren’t far off. He used to live in the area, so he knows the place well. That’s also why all those memories are flooding back. He remembers when everything descended into chaos, not being able to make a call home. Meanwhile, the kids have come upon the blaze. They see a veritable wasteland area of smoke and walkers. Nobody thinks it’s a good idea, except for Iris, who’s sure there’s a path through. Elton believes they could use what Felix taught them to do it. Hope’s the only one of them who isn’t sold on the idea. 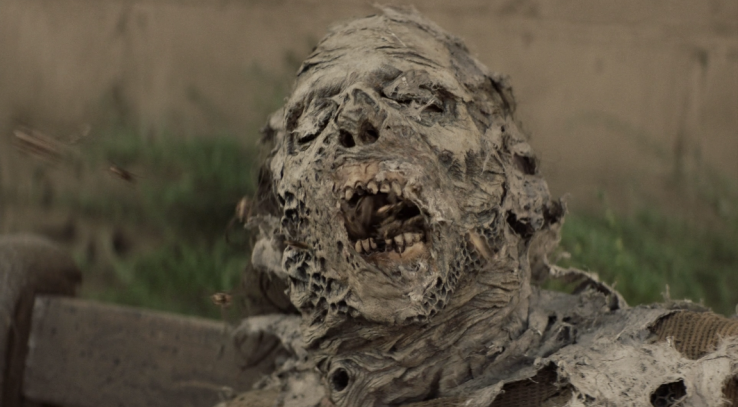 Huck has to force Felix to stop for the night, knowing they need rest or things could turn bad. She’s ready to sleep. But he can’t let go of the past the way she can, he hangs onto the pain. Felix recalls attempting to make it back to his family when everything went bad, to “be with them at the end.” We see more of that night. Young Felix got back to his parents’ house, where his father refused to open the door; not even during the zombie apocalypse would his dad let his gay son in the house. That’s so, so brutal. No wonder it keeps on haunting him. Sadder still when Felix goes home now to his zombified parents.

On the road, Hope and Elton talk more about the death of the world. He says they’re sort of like endlings, though it’s usually one individual of a species, an endling, who is the true last. It’s a depressing thought because it implies the end of an existence all alone; nobody else there to see the end with you, just an end by oneself, the last of an entire species. This is what prompts Hope to spray paint a message to leave behind, to mark that they were, indeed, once there.
The kids move on and arrive at the blaze the next day. They try to strategically make their way through the dead lands of the blaze, zombies around every turn, herds of them moving in any given direction. They remember everything Felix taught them in survival classes, particularly using the sun for direction. That’s great, if you’re not in the midst of a massive tire fire that’ll block out the sky. That leaves the kids in a precarious position among the smoke. They’re able to make a run for the fence at one point, making it through before they’re swarmed by the dead. That’s when they realise they’re not even close to being safe. There’s so much more dangerous territory left to cross.
So why’s Hope putting herself in MORE danger? If you don’t like the series, why do you watch it? I, for one, enjoy The Walking Dead: World Beyond. It’s a different perspective, in more ways than one. So, if you aren’t into the premise itself, or if you find it boring, just turn it off. Nobody’s forcing you to watch TV. For those, like myself, who are digging this series, let’s see what new dangers will befall these kids. I think the perspective of young people who’ve only known the post-zombie apocalypse world is incredible. Looking forward to more.