A great image opens this episode: a zombie steps on a little bird’s nest, two new eggs sitting in it; new life is crushed by death. June comes by to ask Morgan how Grace is doing, and the answer isn’t a great one. Grace is isolated, grieving by herself. Morgan somehow blames June, not to mention he already holds the whole Virginia thing against her. He refuses to even let June inside now and he thinks the only reason she’s there is to alleviate her own feelings of guilt. More divisions between people who used to be very close friends. Will the old crew ever really get back together again? Or are they forever driven apart by the circumstances they’ve faced in the zombie apocalypse?

June spends her time scouting, marking off areas on a map. There’s another THE END message across the road by the tunnel. She soon takes out the letter Jacob Rabbi brought her—the one from John. She’s hesitant to open it and clearly hasn’t once done so yet, putting it away fairly quickly. She’s surprised when Dwight sneaks up on her. He wants to know why she’s out there, and June doesn’t want a babysitter. But Dwight just doesn’t like his friend being alone. June admits to her mistakes, but she’s being too hard on herself. She blames herself even for John’s death. When Sherry comes over to look for salvage, the trio are attacked by a gunman in the nearby hills. The gunfire starts drawing walkers on the road, too. Dwight and Sherry give June cover as she heads up the hill.
June comes upon an RV and breaks in through the window. Inside, she finds a cork board with pictures all over it and a map. One of the pictures features some of THE END graffiti. There are many locations marked off. Then, June hears a gun cock behind her. An old man’s (Keith Carradine) got her at the end of his gun. He asks if she’s one of the people “painting the slogans.” This old fella tells her to leave, he says the people doing the graffiti are very dangerous. June wants to share information, the old guy isn’t interested. She mentions the orchard, one location he doesn’t have marked off. The old man wants proof, so June agrees to take him to the orchard.

June and the old man leave in his RV. She starts swerving and gets the jump on him. This is when he notices the J.D. on the gun’s handle June is holding. The gun belongs to him: he’s John Dorie, Sr. Holy shit! What a world. Elsewhere on the road, Dwight and Sherry are trying to figure out where June has gone. They do a lot of arguing, questioning each other as to why they’re out there. Dwight talks about a point when he wanted to die, but it was John and June who “changed everything” for him through their undying love. Sherry doesn’t have much to say. Meanwhile, June’s grappling with meeting her dead husband’s father. John Sr. and his son obviously weren’t close, we know bits of their history already. He doesn’t even ask about his son, though he can tell some things just by what he notices, like the wedding ring. Then June realises she’s lost the letter John gave her. She wants to go get it, however, John Sr. refuses to go back. Plus they have a zombie stuck in the undercarriage that’s wrecked the RV.

Along the road, one of the horses is dying, so Sherry puts it down. She and Dwight have to go on one horse from there. Sherry then tells Dwight she wants to hunt down Negan, that’s why she came with Dwight; to say goodbye. He says he’ll help her get out once they find June. They’ve just got to slow down and not kill another horse. Does this mean we’ll see Sherry eventually on The Walking Dead? For the moment, they find June’s jacket, and hopefully that letter’s still in there, as well.
In the RV, June notices some of the newspaper clippings John Sr. has been keeping. One of them involves a “psycho killing two–bit preaching mortician” that Sr. put away once back in the day. That same psycho is the Teddy running the Holding; explains all the embalming stuff. Good lord. Twisted! And a whole lot of macabre horror fun. When the zombie apocalypse occurred, Teddy escaped from his cell in prison. Atop everything else, John Sr. put Teddy away by planting evidence. This leads to June questioning why Sr. didn’t go looking for his son, and Sr. says his son was better off without him. She wants to go back to the cabin by the river. It takes a lot of convincing because John Sr. has bad memories of the cabin and his son. But back they go.

On the way, John Sr. and June come across an embalmed zombie, which only makes him more sure that Teddy’s still out there doing horrible things. Their time walking through the woods back towards the cabin gives the two time to talk, revealing a few things about John Jr., too. Dwight and Sherry are back at the RV, figuring out that John Sr. is the one who owned the vehicle. So many strange twists of fate in the zombie apocalypse, even after normal life has long ceased. Up the road, John Sr. and June arrive at the store where Jr. rented all his videos. The dad recounts more memories of his son, though they seem painful to June rather than comforting. He also tells her some Dorie family history, from way back in the Wild West days.
Then he tricks her, locking her in a room out back. “We all got ways of protecting ourselves,” John Sr. says.
And then he’s gone. John Sr. goes to the cabin on his own. It’s a melancholy return to a place he once knew. He looks around a bit and even kills a zombie. But he also runs into Ginny’s man Hill, who has him at gunpoint only briefly before Sr. gets him at the end of a gun—his son’s gun. John Sr. asks for information about Teddy and his people, so Hill says something big is being planned and “they want to kill everybody.” Hill wrestles with the old man, but Sr.’s able to knock him down. Sr. gets distracted by seeing his son’s grave when Hill shoots him through the gut. Luckily he’s saved by June, Dwight, and Sherry, who gun down Hill, though the old fella’s still got a rough wound.

It’s good to have a doctor around in the wasteland, meaning John Sr. will probably be okay, in spite of the blood loss. June finds the old man out in the truck he was meant to fix up with his son. John Sr. says that he was “punishing himself” when he left his family, but that it punished them all regardless. He remembers coming home once after he’d left. He saw his son looking happy without him around and he didn’t want to extinguish that happiness the way Teddy’s case did to him. He thought leaving was a way to protect them from his demons. Later, Sr., June, Dwight, and Sherry stand over John Jr.’s grave. June talks about the early days with John—his “light and love.” She opens the letter he wrote to her, reading it aloud for everyone to hear. Just so happens it mentions his father, too. (Reader: I cried.)

Now that Dwight and Sherry found June, it seems they’ll be saying goodbye again. Or maybe not. Sherry doesn’t want to lose her life while living it, she doesn’t want to let Negan be the reason she keeps herself and Dwight apart. Dwight wants Sherry to realise she doesn’t have to be the same person all her life; they can start over again. Why not? The whole world is starting over. They can, too. They’re together again now, back on the same page. June decides it’s also time to give back the wedding rings Dwight once gave to her and John.
They all head back to the community, where Morgan meets John’s father for the first time. Quite the moment. Morgan is happy to meet the father of the man who saved his life. He’s also interested to hear that John Sr. knows plenty about Teddy. Not only that, things with June and Morgan are looking up. They’ll need all their friendships to stay strong in the coming days, to face Teddy and whatever he has planned. “… sure as the sun sets,
I will never stop trying to get back to you.” 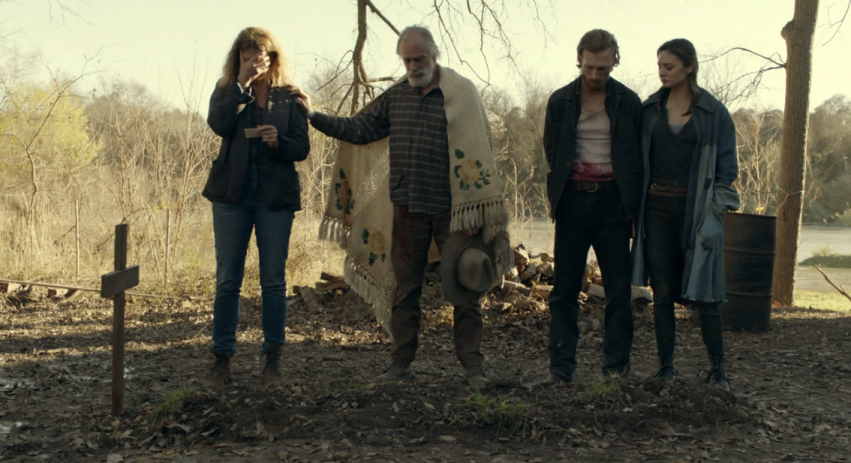