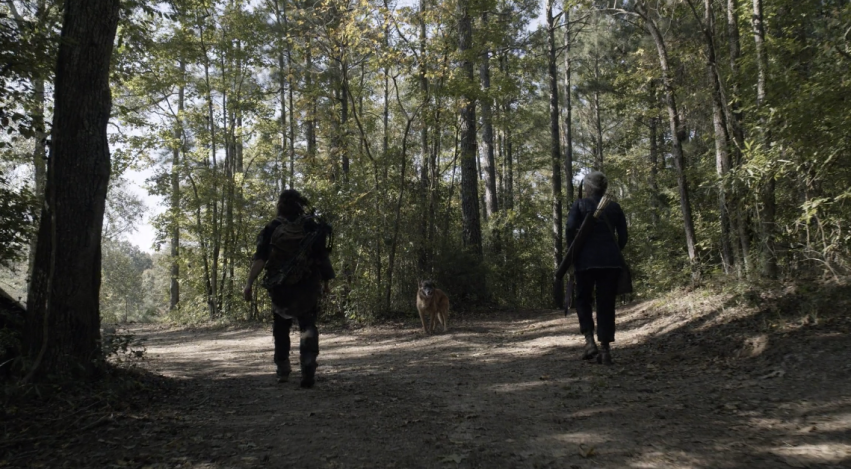 Things aren’t great with Daryl and Carol on the road. They aren’t doing as much talking as they did before, since their latest nasty argument. They just walk and walk with dog at their side; he is the BEST BOY! They wonder how things are going to go now that food keeps getting more scarce and they haven’t found anything to scavenge on their trip. Carol’s going to head back to Alexandria, whereas Daryl intends to stay out there a while longer. When the path splits and they head their own ways, dog is confused; he decides to leave with Carol. That means Daryl’s left all by his lonesome. He’s luckily able to get the bike going again at least.
Back at Alexandria, Carol takes dog home and hangs out at Daryl’s place. After that she’s ready to get back to work. She wants to “fix something.” She needs to take her mind off Daryl and their argument. She gets a task when she finds Jerry working and hungry. Bit tougher than normal given they had to toss out grain because of rats and the Whisperers attack messed up their homemade power grid. Carol also tells Jerry a story about “stone soup,” a parable about sharing. Then she goes to look through the inventory, to work her culinary magic.

In the woods, Daryl’s bike dies so he has to stop. One of the bike’s lines, possibly the fuel injection, looks to be busted up. That puts Mr. Dixon off continuing on foot. At home in Alexandria, dog is acting up with Daryl gone, tearing the house apart. Carol starts cleaning up and notices signs of a rat which are clearly driving dog wild. She starts to construct a rat trap herself with wire and a box, hoping to keep the rat from causing any more mischief amongst the community food warehouse.

Carol heads out looking for more ingredients beyond Alexandria’s walls. She winds up in a field where walkers start emerging everywhere from the forest. She’s feeling extra feisty today, too. She loves killing walkers and it’s something that doesn’t require ingredients, or any emotions, it just requires a whole lot of good knifing. I always love the juxtaposition of Carol the ass kicker and Carol the homemaker, she represents this great duality that we don’t often get to see in women characters on television or in movies.

Elsewhere we find Daryl gathering parts from rundown vehicles he stumbles upon. He might have enough to fix up that bike. Apocalypse living and maintenance ain’t easy tasks. Daryl finds himself in trouble after he gets under a car to find more parts. A zombie inside the vehicle, which is perched on a hill, nearly gets Daryl’s head crushed. He makes it out of there in one piece. But I do hate when Daryl scares me so! Bless his heart. However, we do see here, yet again, that being totally alone in this environment is not a great choice. Always good to have a second person around, in case you almost get your skull smashed. Particularly when you give away your Swiss army knife.

What we see most of all in this episode is how much Carol and Daryl need each other emotionally. They’re two parts of a whole, and when they’re apart neither of them operates correctly to the best of their abilities. In the forest, Daryl’s still trying to fix up that bike and right now he’s looking to hunt some zombies, specifically one with army fatigues on who’s probably got a knife to steal. He puts himself in a bad way after drawing all kinds of walkers with a mere snap of a stick. He ends up falling into a ditch with the military zombie on top of him, just barely getting away without a bite. And he does find some nice supplies on the dead guy, including a utility knife. Great reoccurring line in this episode, once from Carol and again from Daryl: “See you later, asshole.” 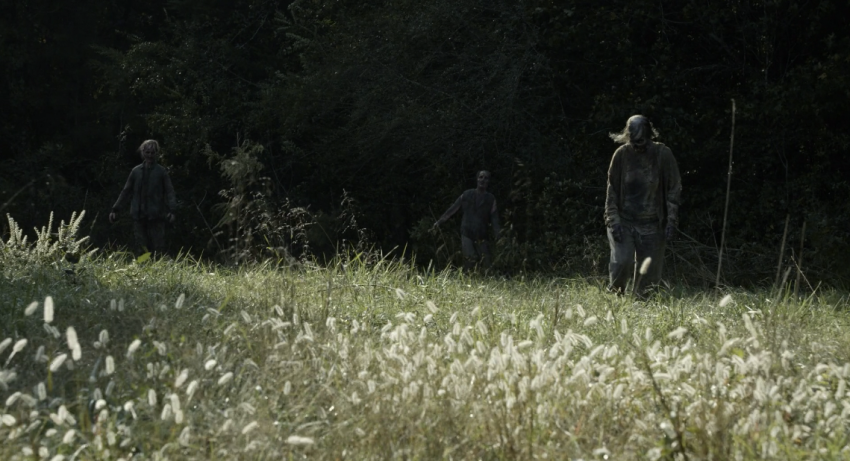 The rat is nearly trapped but Carol lets it loose accidentally. She tries chasing it down yet it escapes again.
That night, she and dog comfort each other in Daryl’s absence. Later she’s woken up by dog when there are scratching noises. So Carol takes a flashlight and heads downstairs to have a look. She cuts a hole in the drywall trying to find the rat but can’t see anything. Then she starts stabbing more holes in the drywall. She punches and kicks it apart, taking most of the wall down. Still, no rat.
On the road, Daryl finally gets his bike going again. He soon makes it home to Alexandria.
Hopefully soon he and Carol get back to normal, too.