Captain Brownlee’s having a meeting about plans for the ship. He’s being told that things need to move forward. He also discusses the recent forcible sodomy and murder that occurred on board: “Evil times we live in.” That’s in spite of saying he could “halfway understand” someone raping a girl. Up top, Sumner and Drax have a chat, as well. Henry asks the surgeon why he cares about the cabin boy so much, especially considering the “butchery” the latter’s seen. Sumner believe an innocent man shouldn’t be punished for the crime. Drax doesn’t say much, naturally, because he’s the one who did the deed. He keeps trying to steer the surgeon away from it all. Yet Sumner can’t make himself ignore the reality of what’s happened.

Later, Sumner goes down below in the brig to see McKendrick to make sure the man’s okay. The accused believes he’ll be hanged surely, considering he’s homosexual. He continues to profess his innocence, though knows it doesn’t matter; they want a scapegoat and a gay man in the 1800s was sadly the perfect fit. We see Sumner look at an old problem McKendrick has had with his hand for years due to his thumb being crushed by a lump hammer. That means McKendrick couldn’t have strangled the boy to death, and Sumner has the facts to prove it, taking them to Cpt. Brownlee. The captain still believes Drax’s story and won’t accept medical fact from his surgeon. Sumner stresses it’s not great to have a murderer on the ship, while Cpt. Brownlee suggests he’s being “reading too many penny dreadfuls.”
Finally, the captain gives in and lets Sumner investigate. This starts with pulling back Drax’s foreskin, noticing crabs but no “signs of infection,” as well as no indications of swelling. Drax keeps calling McKendrick a sodomite, acting offended he’s being questioned on the word of a homosexual. He acts pretty confident, to the point he nearly offends Cpt. Brownlee. Then he starts talking shit about Sumner and the night they brought the surgeon back to the ship drunk, when he and Cavendish looked around the place to find some interesting things. This is getting TENSE!

The captain notices a wound on Drax’s arm and has Sumner look at it; fluid needs to be drained off it, keeping the two enemies in close quarters a while longer. The surgeon finds something lodged in the wound as he drains it off. What is it? A tooth. They know it’s the boy’s, and before they can do anything Drax is fighting them, knocking Cpt. Brownlee out fast. Sumner stays on his feet long enough for Jones to get in there with a rifle.
Then they get Drax in irons.
Makes for a long trip…

Unfortunately, Cpt. Brownlee’s had his brains scrambled from a split skull. This leaves the ship without a captain. Therefore, Cavendish will have to take up the mantle; he’s also got to keep up the other secret duties of making sure the ship hits the bottom of the ocean. He insists they keep going north, but Jones and some of the others disagree, believing they’ve already gone too far north. That doesn’t matter since Cavendish is now running the ship. In the background they can all hear Brownlee wailing in painful terror from his broken skull and beat up brain, both sad and horrifying. It’s not too long after that he dies. Soon the crew are singing “Nearer, My God, to Thee” while they have a funeral at sea for their former captain.

The crew are sure the ship’s cursed, especially Otto, who recounts a nightmarish dream prophesying all their deaths. Sumner attempts to dispel the folklorish beliefs of the crew, but seamen are a hard lot to break from their superstitious habits, especially back in the mid-1800s. Meanwhile, the surgeon remembers being in India, the “reckless greed” and the death and the murder he saw. He and other surgeons were attacked when they went to go looting treasures, which proved to be troublesome, considering his commanding officer had sent him. He was made to take the fall. Sumner now has a vision of Drax whispering to him: “Homo homini lupus.”
And now he’s out there at sea on a cursed ship.

“Dreams are just a way to clear the mind, a form of purging.” 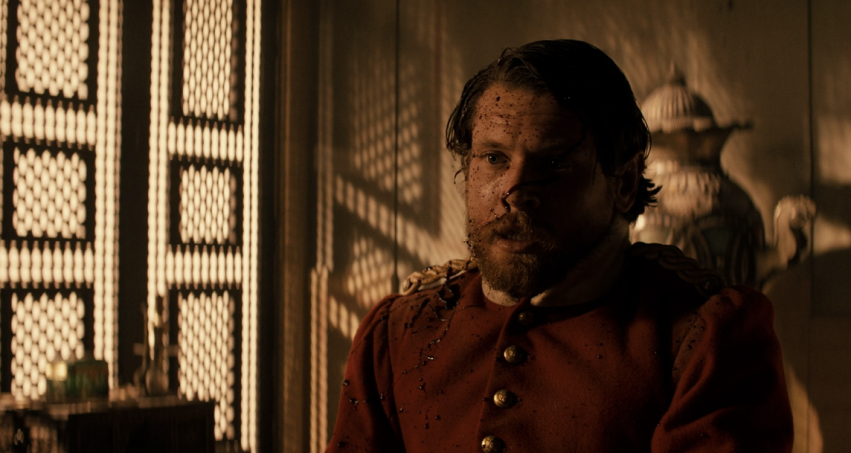 Things are getting stormy, quite literally. An Arctic storm is coming on while the ship’s jammed in the ice and starting to bend inward. Everyone’s got to get their things off the ship so they can move it to the Hastings, another fellow ship nearby. Cavendish stays aboard, heading down where Drax is still in irons, insisting the ship isn’t going to break. Drax then explains he knows the plan for the ship, he’s figured it out. He offers to sink the thing himself, or else the ship will stay strong. But Cavendish loathes Drax, after what the man did to their former captain. He doesn’t want to give Drax an axe. Still, he does the work himself.

Afterwards, Drax and Cavendish watch the ship start to sink from the ice with some of the crew who’ve yet to head for the Hastings, including Sumner, ordered to stay. They’re all going to wait out the brewing storm, then head for the other ship. One trouble is that Sumner will have no laudanum to keep him going through the night with the medicine chest headed off to the Hastings. He also doesn’t like being around Drax in a tent, having to spend the evening with a man who intended to bludgeon him just as was done to Brownlee. We hear a rambling nihilistic rant by Drax. He keeps attempting to intimidate Sumner, but the surgeon doesn’t engage much.
The storm’s raging and things keep getting worse with a tent catching fire, all while Sumner’s going through withdrawals. Nevertheless, the men make it through the night and the storm passes. Cavendish appears deeply troubled, especially after realising the Hastings is gone. He’s sure the ship has just moved for some reason because of the storm. That makes Sumner worry for his medicine chest. But that’s just one small worry. Cavendish is positive they only have to wait until the Hastings returns. If not, they’re stranded.

Sumner tries to grapple with withdrawal as the remaining crew and Cavendish are yelling at each other. Cavendish then hauls out his rifle, threatening everybody, and he shoots one man to death. He tells the rest he’s a “loose cannon” and lays out his plan for going to Pond’s Bay, to look for the Hastings or else another ship that might be in the area. For the moment they’ve all got to sit in a bloodstained tent with two murderers. Worse, Sumner’s dry heaving and sweating, about to have one of the worst days of his life. When they get in the boats, Sumner weeps for his chest as Otto does what he can to care for the surgeon.
A bit later the crew come upon Jones, frozen to death on an ice floe.