The Last Thing That Mary Saw, from director-writer Edoardo Vitaletti, fits under the umbrella of Queer Gothic. The screenplay, set during 1843 in Southold, New York, centres on a girl named Mary (Stefanie Scott) and the oppressed lesbian relationship she has with a housemaid, Eleanor (Isabelle Fuhrman). The girls live in a community under a religious stranglehold, led by the Matriarch (Judith Roberts). The film begins after the death of the Matriarch, and Mary’s the one being held accountable. The first we see of Mary, the girl has a blindfold around her face and she’s obviously been bleeding from the eyes. She’s held at gunpoint and forced to recite the Lord’s Prayer, for fear she may be possessed by the Devil. We’re soon taken back in time a little to see how the relationship between Mary and Eleanor was discovered, forcing increasingly brutal physical and mental punishments on the pair. Right up to the day when the girls fought back violently.

Vitaletti’s debut feature is a powerful story about queerness under pressure from religious forces in the early half of the 19th century. There are strong, dark Gothic and supernatural elements in The Last Thing That Mary Saw, but the beating, ugly, violent heart of this tale is 100% human. As a queer man I appreciate seeing a lesbian story set in the mid 1800s, because—regardless of the fact it’s a tragic one—it shows two young lesbians fighting, by any means necessary and no matter how vicious, to be free, to live on their own terms and love each other. All queer stories need representation but occasionally, especially the mainstream ones, get bogged down in over-sentimentality or in trying too hard to make every queer character morally perfect. Vitaletti allows Mary and Eleanor, through the horror genre, to try and claim their identity without worrying about them being angels, or devils; they’re just two girls in love under the thumb of violent Christian repression, and, frankly, they’re sick of that shit. 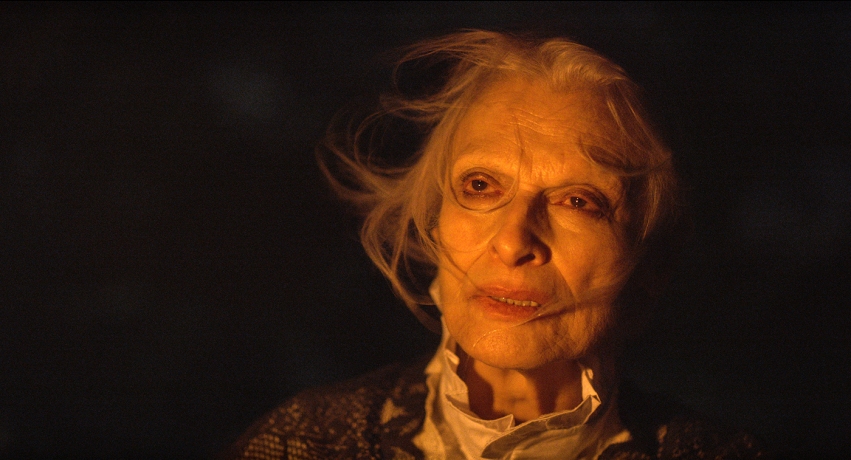 The setting of 1843 in Southold, New York in The Last Thing Mary Saw is of huge importance. English Puritans settled in Southold during the 17th century. Various groups of Puritans in the area intended to make Southold into a theocracy. Two hundred years later, the Matriarch and her community of worshippers are still carrying the torch of Puritanism during the early days of the Victorian Era which was itself like an echo of the early days of the Puritan colonies. All that’s interesting enough, then we have to consider the John Calvin quote with which Vitaletti begins the film: “All events whatsoever are governed by the secret counsel of God.” Just these bits of setting, time, and an opening quote set the stage for a battle with religious oppression.
The film taking place during 1843 is also a significant point to consider because of the history of sexuality and the film’s depiction of anti-queerness. The 19th century is when sexuality became more prominent in terms of how people talked about it and the ways in which Western society went about deliberately giving names to sexualities in order to help repress them. By giving Othered sexualities a name—thus shape and form—those in power were able to contrast these sexualities with the approved, official, traditional hetero norms. At one point Mary touches on this herself when she says: “God creates enemies in order to perform his good.” It’s just the same as heteronormative society creating enemies by naming sexualities, demarcating the enemy lines clearly. Everything in the film is tied up in the Puritanism of America, which has never quite left, even in 2021.

Very interesting in The Last Thing Mary Saw how Puritanism’s lingering influence in America gets depicted through the way the Matriarch and the rest of her religious community treat media. The Matriarch, and others in the community, see a book they’ve deemed blasphemous as the cause of Mary’s lesbianism, rather than homosexuality being an intrinsic quality of a person. This parallels the way people continue to blame violent media for the violence in America, like how the Columbine shooters and their love of heavy metal meant they were destined to become violent, or before them the West Memphis Three were scapegoated for reading Aleister Crowley and listening to Metallica. We see conservatives and extreme right-wingers today warn that certain television shows, movies, music, and other forms of media are promoting queerness to ‘turn’ kids gay. Puritanism is a foundational piece of (White) America, entwined in the settler colonialist roots of the modern United States, and Vitaletti’s film illustrates certain ways in which Puritanism wriggles its way on through the veins of the country’s history, from one age to the next.

The religious community in The Last Thing Mary Saw are compliant with a patriarchal, heteronormative religion, even under the Matriarch who’s perpetuating patriarchal values. They’re so bound up in Puritanism that they can’t even fully talk about the reasons for Mary’s punishment. One of them mentions Mary’s been engaging “in acts.” Otherwise lesbianism is only named as part of “abominable behaviours” or as being “a sinful presence.” It all amounts to the film essentially portraying a 19th-century version of conversion therapy, and a historical view of anti-queer Christian ideology in modern America. Mary and Eleanor are made to kneel on rice and pray, in an effort to painfully eradicate their queerness through the word of God, until that punishment is not severe enough and Eleanor specifically is dealt with in a more severe manner later, given she’s not only queer but the lower class help.
A tragic subplot that comes to bear on the whole story involves the Intruder (Rory Culkin), whose red birthmark across his face made him an Other in his community. He was said to have a brain deformity, and one person suggested he be burned to cure the birthmark, resulting in scarring. It’s all related to monstrous birth, which ties back into the film’s use of religion and sin in its themes of oppression and repression. The sad part is that though the Intruder’s known the torture of being violently oppressed, he remains a man and he in turn perpetuates patriarchal values when he forces himself onto Eleanor, showing how in an unjust system under unjust rules even the oppressed can, and do, turn on each other; and also that men, of all classes, will abuse their gendered power.

The most haunting aspect of The Last Thing Mary Saw is how it portrays the violent force of silence through Mary and her father. Supposedly Mary’s father is the one who brought the book into their house and yet there’s never any discussion of him being punished. He never tries to take the blame, it’s the book that takes all the blame other than Mary and her body. Later, after a tragic event, Mary has literal blood on her hands and she tells her father: “This is what silence did to our family.” We see how silence overtakes a family. Rather than talk about sexuality, the family, and the community as a collective, punish sexuality; there’s no education, only painful learning and forceful silence. The concept of silence in the LGBTQ2SIA community is a prominent one, because so many of our lives have been dictated by the inability to be vocal, as well as visible, in our identities. There are many forms of silence when it comes to queer issues. We see several ways in which queer women particularly are silenced throughout the story. The most horrific silence in the film is the silence imposed upon Eleanor when she’s rendered voiceless, literally silenced by a patriarchal heteronormative community. The community cut into Eleanor’s throat and her vocal cords, so that she can no longer speak a word; the corporeal silencing of a lesbian woman.

There’s a lot of horror and tragedy in The Last Thing Mary Saw. All the imagery is anchored by strong performances from the central cast. Isabelle Fuhrman and Stefanie Scott as Eleanor and Mary respectively each give quiet, powerful performances that don’t always rely on dialogue. There are beautiful and sad moments alike when the two young lesbian lovers speak volumes just by the way they look at one another; that comes around in the late moment where the film’s title becomes apparent as just before Mary’s hanged for her numerous compounded religions transgressions she sees Eleanor’s face one final time. Even after all the horror and religious terror there still remains a tiny bit of hope and love amongst the tragedy.

Vitaletti’s film captures the lingering, horrifying effects of Puritanism in America by depicting a story that, with a few alterations, could be set in America during 2021. People want to believe that the country’s evolved, that it’s light years away from where it was a couple hundred years ago. The technology has changed, but the social and political issues plaguing America have only shifted and taken on different shapes, embedded so fundamentally in the country’s skin it’s tattooed on the national soul. It’d be a wonderful world if hatred of queer people was a relic of the past, but if we keep building on top of old systems of oppression and expecting real change then we’re in for a rude awakening. This is part of why Eleanor and Mary’s plan for revenge goes awry, because they’re using violence, the tools of the oppressors. Audre Lorde once said “for the master‘s tools will never dismantle the master‘s house” and in the film we see Lorde’s statement ring true, as the oppressors are the ones who ultimately win in spite of Mary’s violent rebellion. We cannot grow bright new flowers from the dusty foundations of historical oppression. Colonial America’s anti-queerness, colonialism, and racism mean anything that grows from those roots is automatically tainted. Although the Puritans aren’t still around, their legacy lives on in many ways, like American politicians concerned with women’s bodily autonomy and trans people using the bathroom. This is the real haunting terror of The Last Thing Mary Saw: there are still many young women like Mary and Eleanor, sick of living hidden lives, desperate to be themselves, and their tragedies continue to play out despite the progress of time.