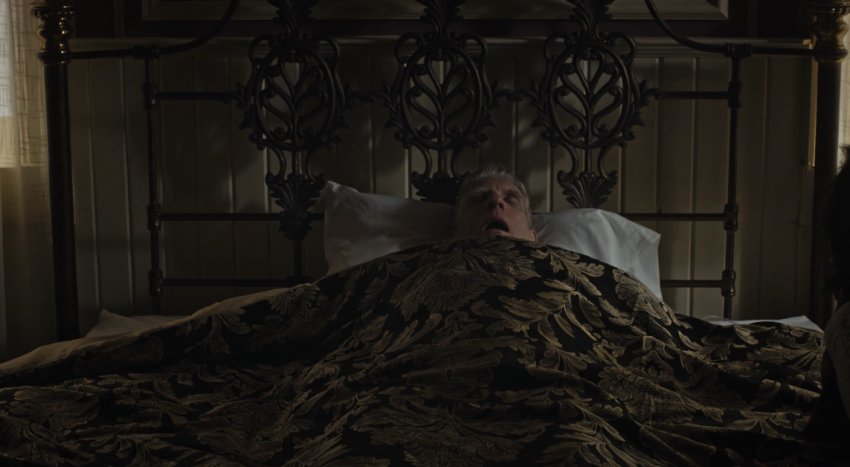 Vincent has returned out of nowhere. His mother Florence is thrilled, obviously, and Theo’s shocked. A strange reunion for everyone, though happy, too. Vincent says hello to everyone, even if he doesn’t quite remember everybody from when he was a little boy. He reveals that Spencer knows he’s there, that grandpa’s known for a month and didn’t say anything. Is it one of the patriarch’s surprises for the reunion? At that same moment, Dr. Trinh explains she administered “end of life medication” to Spencer as directed. This sends the family rushing in to see the old man dead. It’s a shock to everybody. Grace is deeply upset she couldn’t be by her husband’s side. Meanwhile, Dr. Trinh doesn’t show much emotion, and Spencer’s insides burn a hole through the bottom of the bed.

The family’s reeling, now that they’ve got to start the competition in the wake of Spencer’s death.
We get a flashback of Jayden and Seamus, talking of Aphra getting adopted. Seamus was worried about the money. Jayden told his half-brother to ask Spencer, telling him the old man would happily help if he saw how much it meant to Seamus. Things were once good between them. Now, we see Seamus and Jayden at each other’s throat after Spencer’s death. Everybody’s uneasy about the game, however, if they don’t play then everything from the will rolls back into the old man’s shipping company.
And so, the games must begin.
The final family competition, ever. Theo and Vincent have time to catch up a little. They talk about that fateful night when Vincent was kidnapped by boat, then loaded into a truck. Eventually, Vincent woke up on a mattress in some strange room. He says he was with those people a couple weeks, then he was brought to live with a family someplace else outside the country. He says the family were “good people,” and he sort of forgot about his original life. Theo tells his brother he never stopped thinking of him, neither has he stopped feeling guilty for what happened. At the same time, Florence is concerned about the family wealth, likewise concerned about Dr. Trinh and her interests. Then there’s Grace, unwilling to let the “garbage family” have all the riches. Things have already gotten complex; they’ll soon become deadly.

The family comes to a setup of beams and ropes with knots in them. The first person to fall off the rope is booted from the competition; they get nothing! Oh, my. An endurance competition between the family members. Then we discover that Liv is entering the competition. For those who don’t know, she’s part of the family, for real. Dr. Trinh reveals Liv is “biological family.” This doesn’t convince Florence, but Grace suggests it could be true, and Theo says if it’s true then Liv deserves to compete. And so, another body joins the game. Another addition? There are spikes setup below each rope. Could be a nasty fall. There’s already lots of nasty taunting between the family members, especially Seamus and Jayden.
Another flashback of Jayden talking with Spencer about the adoption, as well as business matters. The young man only wanted to help Seamus, whereas Spencer thought his older son was playing the younger. The old man agreed to bankroll the adoption, only if Jayden could take something to “balance the transaction.” He was clearly always working to pit his children against each other with a sick patriarchal power over them all. Grace thought it was Spencer training his son to take over the business, suggesting Jayden should ask Seamus for his seat on the family company’s board of directors. Back to the rope game, everyone’s getting slightly tired. Jayden offers his mother his vest to keep warm while Dr. Trinh makes clear “there are no rules” to this game. Seamus figures he’ll try to knock Jayden off, though he’s unable to get it done. So he tricks Jayden with the offer his vest for warmth, sending the latter falling off the rope and into the spikes, ending in a brutal injury.
This takes Jayden out of the competition and out of the will. Christy’s pretty disgusted with Seamus and his violent method of playing their family competition. She doesn’t understand why the family doesn’t get therapy together instead of playing silly games. Seamus attempts to explain his twisted family, telling his wife how his father would blast “We Are the Champions” any time Spencer won against his six-year-old son at checkers. Probably gave him a rough psychological complex about winning and losing. Christy warns Seamus he’s “getting ugly.” She also says he’ll hate himself once the game’s over, especially if he continues on the path he’s started walking.
Another flashback to Seamus and Jayden, celebrating over Spencer funding the adoption. That was when Jayden also brought up wanting Seamus’s seat on the board of directors. Spencer was driving rifts between his sons purposefully, moulding Jayden into the son he wanted when Seamus clearly didn’t live up to his capitalistic expectations. It didn’t sit well with the older son, but he agreed anyway. That obviously created a long-lasting strain on the brothers’ relationship. Spencer later told Jayden: “You have to be ruthless and slice away at those weaknesses of yours.” He applauded his son for overcoming the desire to care for people, even his own family.

We see Grace, Jayden, and Christy go out to that place we saw in the opening of Episode 1. It’s now “an impenetrable safe room,” thanks to Spencer. While Grace is trying to get the keypad to open the door, Christy sees the person in the plague doctor mask standing in the woods watching them all. The trio head into the trees to confront the person, who won’t respond to Christy. And Christy gets a slash across the arm when she tries to talk to the masked villain, sending her, Grace, and Jayden running. Jayden tries to protect his mother and the killer runs after him, back towards the house. He hides in a shed, then the killer follows. But he also finds gross, sticky human remains, though he doesn’t have time to wonder long about what it is when the killer turns up behind him. Jayden isn’t just out of the competition or the will, he’s going to die.

At the same time Christy runs back into the house, calling out for help. Seamus sees his bleeding wife and Christy tries to tell him, as well as the rest of the family, what’s happening. They all head out into the forest to search for Jayden and Grace together. In the shed, Jayden’s returning to consciousness to see he’s on a table and his four limbs are attached to hydraulic winches and steel cables. Grace finds her son in the shed and tries to get him free, when the others hear her yelling. The family converge on the shed, all doing their best to get Jayden out of the contraption. Only they can’t turn off the winches and they’re pulling Jayden apart, quite literally; the guy’s leg comes off at the knee, then one of his arms rips off at the shoulder. Blood everywhere, and nobody can stop it. Drawn and quartered, just like in the olden days.

Beautifully gruesome episode.
It isn’t my favourite season so far, but things are definitely starting to cook with gas now.