We see Dr. Trinh visiting with an artist, complimenting his “visceral” work. The artist, Reycraft, is played by a familiar Slasher face, Tom Winston. He specialised lately in killing his own artwork, putting it in an electric vice and crushing it. She put his head in it and turned it on, crushing his head like an apple. After she was finished she put her fingers right into the smashed up brain, feeling around in it orgasmically.
In current day, Trinh’s been revealed as The Gentleman. She laughs at the remaining trio, explaining she was paid by Spencer to do what she’s done. Spencer “wanted a predator on the island” to weed out the wheat from the chaff. He charged her with the punishments while the games were all of his own design. Liv cracks Trinh in the face for the murder of her mother. But it leads to Trinh getting free from her bonds, grabbing a knife and attacking the three last Galloways. They all wrestle with the doc and she nearly strangles Liv to death before Vincent knocks her out. Then Trinh’s tied up all over again, though probably a bit more tightly this time.

We get bits and pieces about Dr. Trinh. She is actually an end of life specialist. She definitely does have accusations lingering from her past. Made her the perfect person to clean up all the dirty bits from Spencer’s past starting with Reycraft, who was O’Keefe’s father. We also see that Trinh escaped her supposed death, hanging over just over the blades of the wood chipper while Florence turned it on, which is fun, because slashers don’t often fill in those little spots in their plots, usually opting to let someone die and come back with little to no explanation.
Meanwhile the last three Galloways are deciding on what to do with Dr. Trinh, who’s already got a whole “escape plan” concocted, including dirt on every one of the family members to protect herself, should she need it. Vincent was involved in a murder during a riot. Liv was involved in “a coverup” during her time in Iraq. And Theo was involved in something similarly shady. Shit, girl! Dr. Trinh gloats more then Vincent loses his shit, stabbing the woman to death viciously. Now there’s no chance of all that dirt not coming out.
Plus there’s one last family challenge.

The surviving trio find the last challenge instructions in the deep freeze, along with Spencer’s somewhat frozen, rotting body. There are three blades on the corpse. And the instructions mention a heart. Spencer already has a gaping hole sunken into his chest, due to Dr. Trinh’s hideous IV replacement. There’s no removal of Spencer’s heart left to do; quite the symbolic death for the old man, who figuratively had “no heart.” The whole challenge is about “guts,” so maybe they have to dissect grandpa?! In the midst of it, Vincent and Liv push Theo to reveal his secret. Theo deflects, thus the dissection begins with Liv and Vincent cutting Spencer open. The whole thing gets pretty nasty, pretty quick. Liv doesn’t have much trouble until the colon. Vincent runs off for a puke soon, winding up in a heated argument with Theo that gets him chasing his brother with a knife; Theo uses the secret passage to hide, but makes too much noise, giving away his hiding place to Vincent, who starts stabbing through the wall.

While the brothers move through the hidden passage behind the walls we see a flashback of Spencer smacking Vincent around after Theo claimed his brother was strangling him. Vincent blames Theo for Spencer sending him away. And the brothers keep fighting, back out into the house, out of the hidden passageway. Vincent slices his brother a couple times while they continue to argue about their fucked up family. In the struggle Theo gets a garrotte around Vincent’s mouth and saws right through his brother’s face, cutting off the top of the head. Liv walks in right as it occurs.

In the aftermath, Theo is traumatised and bloody. He has a bit of help from Liv to take off the bloody clothes and get into the shower. He blames himself for so much. Liv tells him: “This weekend would have broken a saint.” She says he fought most against his family’s darkness and calls him “a good man.” She helps Theo wash off the blood, and if these two weren’t technically related this would be quite a romantic moment when they fall into bed together and have passionate sex. I mean, this season of Slasher has been particularly Gothic, so, it fits with the genre.

Aside from everything else, Trinh still hid something inside Spencer’s corpse, and Liv thinks they need to find it. Theo offers to go finish it off, thinking he’s found the “Galloway killer spirit” after all. Yet he also starts to insult Liv and her connection to the family, before he suggests they get married. None of it’s sitting well with her. Seems like Theo wants to take charge now, like gramps, and he has ideas about how everything will go. Liv doesn’t want to get married or be part of the Galloway family name. But Theo seems to think that’s the only way she gets part of the big prize. He further decides to reveal his big secret that Trinh didn’t reveal: he crashed his car into a daycare in a “poor part of town” and Spencer paid things off to keep the Galloway family name clean. Jesus Christ… can Liv deal with that? Nope. She decides to snap Theo’s neck instead.

A little later Liv takes Theo’s dead body out to the wood chipper and disposes of it. Then she goes back inside, to put fingerprints where they need to be to make things look appropriate. She’s all bloody, so it’s the right time to get back to sorting through the wreckage of Spencer’s dissected corpse. She tears and tears until she finds what was hidden. There’s a tiny bullet-like vial with a note inside with the deed to all the Galloway businesses and properties, et cetera. This leaves Liv the owner of all the Galloway assets and wealth. Fine prize for such a harrowing journey.
Liv, soaked in blood, now goes to the dock, awaiting the boat as a winner. But, of course, we see her later, pregnant, carrying on the Galloway family name. She’s redecorating the “torture chamber” that is the Galloway mansion, leaving the past behind with interior design. She wants a nice home for her and her daughter. Maybe she can start a new, better family. As long as the Galloway blood’s not too strong. 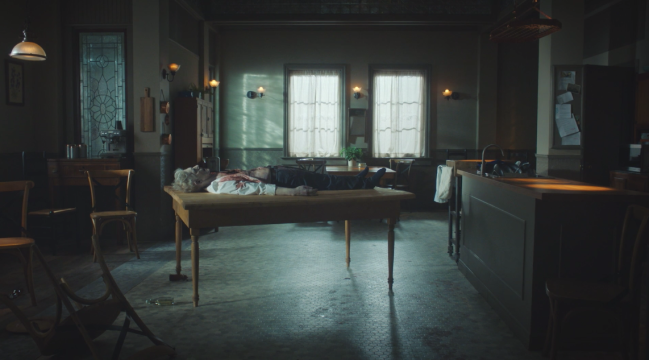 “… that mixture of love and hate, and what you could end up doing because of it.”

Great season! Maybe my favourite from Slasher so far. Brilliant finale, too.