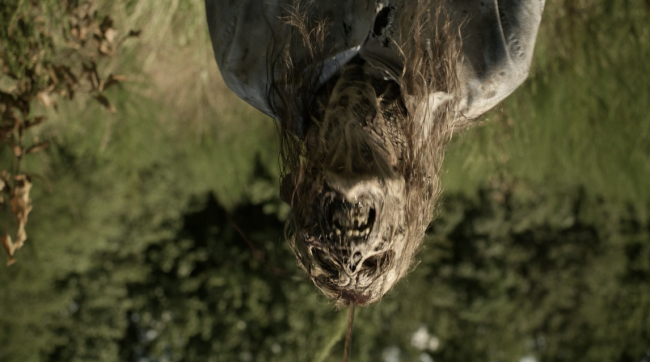 Great shot of Elijah shooting an arrow into a zombie’s head opens this episode. For all the drama of The Walking Dead, which carries the show, there are so many wonderful visuals, especially as the series has gone on into later seasons. Never forget the great cinematography!
Elijah tries to shoot his shot by asking Lydia, who’s on a solo trek, if she needs an escort, but they’re interrupted by a bloody visitor on horseback approaching the walls of Hilltop. The rider falls off his horse and says: “They‘re slaughtering them.” He can’t say much, only urging Lydia and the others to go, handing her a map. Where and what is he talking about? The mysterious bloody man can say no more, dying from his wounds.

The map is marked with a place called Riverbend. Maggie says they can’t go because they’re only holding on by a thread at Hilltop as it is, though Elijah and Lydia insist they have to do something. Lydia can’t sit by idly, given all her mother did to people, all she witnessed; she won’t let others be massacred like she saw the Whisperers do to different communities. So you know Maggie’s not just letting Lydia and Elijah go by themselves, she’s going along for the ride. On the trip, Lydia asks Maggie why she won’t accept the Commonwealth’s help, and the latter replies: “Because easier isn‘t always better.” Maggie further recounts a story about a big developer trying to by her father’s farm out during a drought, yet Hershel stood his ground and eventually the farm became profitable again. At the same time, Lydia knows that hardship doesn’t mean happiness, either. But Maggie insists those in the Commonwealth haven’t been tested in a decade, she knows they wouldn’t be able to handle a major threat like those out there in Alexandria and Hilltop. Right about then they nearly run down three Commonwealth soldiers who’ve been zombified; perfect timing!
Then they see Aaron running up the road towards them. 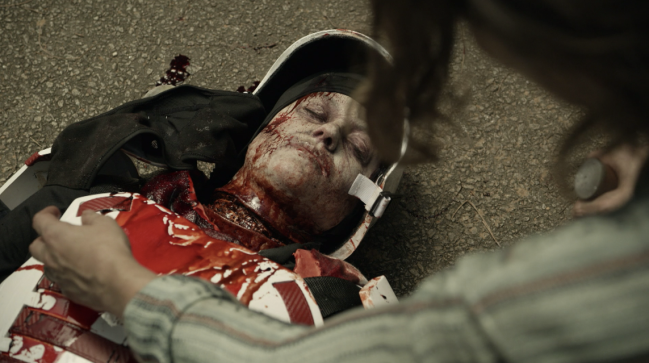 Jump back one week prior.
Aaron goes to the Commonwealth’s church, where Father Gabriel is once again a preacher at the pulpit, preaching the gospel to a nearly full congregation in the pews. Gabriel’s talking about strangers and humanity, the creation of community and family. He juxtaposes how things are out in the wastelands, where people come together differently, versus how they are in the Commonwealth, where there are new material things that divide us. He’s found beauty in the struggle of the post-zombie apocalypse. After the service, Gabriel and Aaron talk about the way things have changed. Aaron’s been asked to be part of a “new immigration initiative” now. He wants Gabriel to help make contact with a “religious group” on the outskirts of Virginia. They’re fully part of the Commonwealth already.

Off Gabriel and Aaron go with the eager Toby (Jason Butler Harner) to meet some supposedly “friendly settlers.” Very interesting use of the world ‘settler’ here in The Walking Dead universe, even more so when Toby later uses the word “natives.” Looks like the priest and Aaron are being asked to make contact, but Gabriel thinks it’s dangerous and refuses to go in first. Yet Toby’s all but forcing them to go, so they comply. Quite an ominous building they approach, one with a big red cross marked on the exterior. Aaron does the talking to begin with and soon a door opens. Out comes a proper warrior, Hart (Jenique Hendrix), to collect their weapons, then the group are led inside the shadowy building, taken through dark hallways until they reach a room where they meet Ian (Michael Biehn).

Aaron talks to Ian about the Commonwealth, where it’s like “the old world” and they have all sorts of modernity. That doesn’t sell Ian right off the bat. He says there must be prostitution, gambling, drugs, just like the pre-zombie apocalypse world. If not, is it really like the ‘old world’? So far this conversation’s not going well. Aaron pulls out a phone to show off photos of the Commonwealth, including soldiers on the periphery of nearly all of them. Ian isn’t excited about auditioning for another community, neither does he like the secrecy about where the Commonwealth’s located. Then Ian shows off a shelf full of skulls belonging to “traitors, murderers, rapists, and a few cannibals.” He wonders why he should trust any of the Commonwealth’s people if all those skulls belonged to people who pretended to be trustworthy, too. Things devolve and Ian pulls out his gun, forcing Toby to his knees. He thinks they’ve come to raid the place, like others before them. Father Gabriel and Aaron attempt to defuse the situation, but Toby soon grabs a gun and starts killing, right as Ian was about to let them go. Shit. One week prior to these events we see Lance getting a visit from Toby. The politician was stressing out about the “communal project” he was able to get greenlit by Pamela. He got word about a caravan of theirs getting snatched up by “another warlord” out amongst the wasteland communities. What we’re seeing is how Toby was always using Aaron and Gabriel as decoys to get him inside, allowing him to take violent action, “a surgical solution” a former CIA guy like Toby could provide. Nasty stuff. Again, we’re seeing that the Commonwealth is merely a new home for American nationalism. Hornsby just wants power, he doesn’t care about making things better; he simply desires to rebuild the American Empire.

Now, Toby has Ian at his mercy, looking for the guns stolen from the caravan. He doesn’t keep Ian around long, gunning him down in cold blood. He’s a sick puppy, especially after seeing him kick Ian’s dead body in a rage. This all appals Aaron, who’s seeing “the other side” of the Commonwealth’s supposed democracy. The Walking Dead has been doing some compelling stuff lately with the Commonwealth, essentially a critique of America, and it works even better now in the midst of a pandemic as we see the inequalities laid barer than ever before in recent memory. Aaron tries to stop Toby’s rampage, only to end up fleeing into the woods.
Cut to Aaron filling Maggie, Elijah, and Lydia in on the road. Naturally, Maggie’s worried about what the Commonwealth wants with all those guns. She’s also wondering how the bloody map wound up at Hilltop.

Again, we jump back twelve hours ago, as the runaway horseman was trying to flee. He ran into none other than Negan and a woman called Annie (Medina Senghore) with him. Negan found the map and marked it, asking the horseman to take it to Maggie. Negan and Annie took it upon themselves to go save Gabriel from the Commonwealth soldiers, right as Aaron had to make a run for it himself.

In the current moment, we find Toby ready to execute people unless those inside the apartment complex give themselves and the weapons over. He questions people on top of the building before kicking them to their deaths below, as Negan, Gabriel, and the others watch on helplessly from inside. Annie tries rallying the group together. At the same time, Maggie, Elijah, Lydia, and Aaron are creeping their way across enemy lines to help their trapped pals. 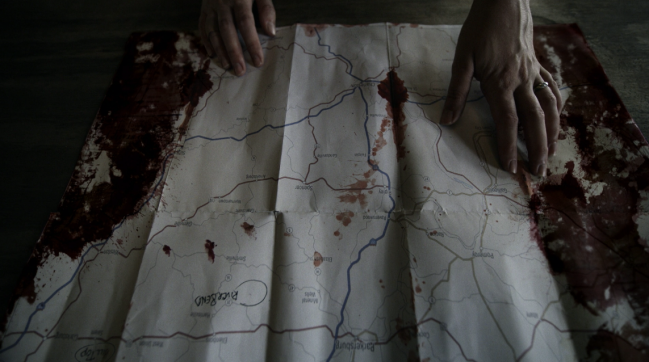