While Byrnes causes brutality to find the missing Vanderbilt baby, Sara, John, and Laszlo keep up their investigation.

Dr. Kreizler deals with tragedy while Libby prepares to snatch a new child

June deals with separation anxiety from her child. Emily's given to a new house and Commander Lawrence. 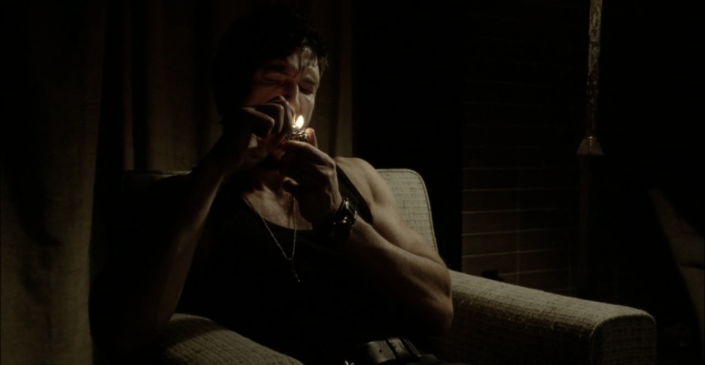 The beginning of this aptly titled episode, “Spilt Milk”, gives us one of the more disturbing bits this season. Johnny Morgan (Dylan McDermott), a.k.a young Bloody Face, has a prostitute come over to his place and breastfeed him. I mean, did Oliver (Zachary Quinto) pass everything on, or did he pass everything on? God damn. To each their own, but compounded with the fact Johnny likes to murder people, particularly he’s got a problem with women, he’s also got a breast milk fetish, a fixation. All in all, he is one awfully messed up dude.
Great, nasty open to one of the final trio of episodes left in Season 2 Asylum!

Kit Walker (Evan Peters) is continually being manipulated, still, by Dr. Thredson. Kit gets to go see Grace (Lizzie Brocheré) and his newborn baby, Thomas, though it’s not long. Even more than that, poor Pepper (Naomi Grossman) gets to talk but she doesn’t get much else, ushered off at Thredson’s orders for some archaic hydrotherapy, y’know – 1960s style.
So while Kit, Grace and their boy get to have a little time together, a slight few rays of happiness, there is still darkness cast over everything. Most of that is Thredson, trying to grasp onto anything which will allow him more power.
Then there’s the fact Grace was taken away, somehow brought back to life. She saw the “bright lights” we all hear about so often. But these lights were different, they were those creatures, the alien life forms. She came back pregnant with Kit’s child.
There’s an amazingly trippy sequence where Grace floats in this empty darkness, also in a pool of water. It’s creepy and sort of has this wide, isolated feeling, like she was just lost in nowhere. Brief few shots yet highly effective and interesting.
Oh, and Kit proposed pretty suddenly. That happened. Right before Monsignor Howard (Joseph Fiennes) shows up with Sister Colette (Tacey Adams) who intends to take the baby to a home for lost children. Thredson turns up for a little gloating, just to rub it in Kit’s face.
Mother Superior Claudia (Barbara Tarbuck) surprises Lana Winters (Sarah Paulson) with documentation of everything on record that happened to her while at Briarcliff. The faithful nun, listening to what Sister Jude (Jessica Lange) had told her previously, helps Lana to get out of the asylum; into a cab and speeding away.

Love the split-screen sequence here, as Thredson and Kit talk while Lana comes down the stairs on her way to escape with Mother Superior. It’s great how Kit helps Lana, in their silent understanding in passing; the double shot of Lana’s face is perfect. Nothing beats the moment when Thredson sees Lana in the cab, tape of the confessions against the window and middle finger to boot.
This leads directly to a scene between the two, back at Oliver’s place where Lana is waiting, police on the way. Brilliant acting from both Sarah Paulson and Zachary Quinto – tense and nastily fun moments abound.
There’s an amazing cut (which could’ve easily been done naturally with connected sets) taking us through to the present again where Johnny Morgan sucks on the prostitute’s milky breast, coming off with a mouthful. Another cut returns us to Thredson’s living room. Just downright excellent filmmaking on television (can I say that? you know what I fucking mean). This whole section, back and forth from past to present, it really makes the scene between Oliver and Lana become even more weighty, the intensity bearing down on us until – BAM!… I won’t ruin it for you, if you’ve yet to see it. 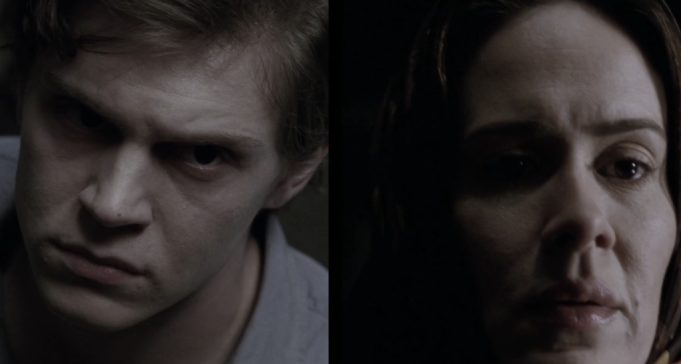 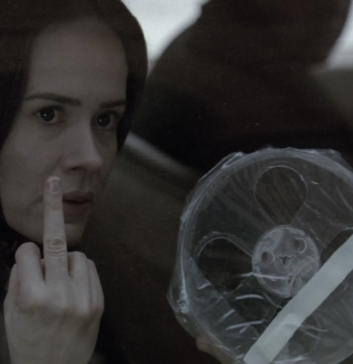 With Ms. Winters out, Briarcliff gets hammered with vicious criticism in the papers and comes under scrutiny for employing Bloody Face. At the same time, Monsignor Howard is having trouble keeping Jude quiet as she raves at him, stuck there rotting as a patient – better yet, inmate. She is disgusted with his refusal to accept the sin he committed, giving his flesh to the devil in (the now dead) Sister Mary Eunice (Lily Rabe). He can’t take it anymore.
It’s terribly tragic the lengths to which Howard goes to in order to secure his job, his life, his so-called legacy. I’m not going to spoil this either, so later in the episode near the end this will play out: be prepared for sadness.
Best of all, though, in the scuffle at the asylum after Lana breaks her story: Kit is able to leave and go free. Furthermore, he uses the death certificate made out for Grace (by Arden when she’d been presumed dead) to secure her release from Briarcliff; they also manage to get their son back and find a way to be a family.
Back at the old Walker homestead, Kit and Grace bring their boy home to a messy, beat up place from long before when Kit was thrown in the asylum. Regardless, they’re happy to be away from all the madness.
Or are they? Turns out Alma Walker (Britne Oldford) is back. Even better than that: she has a baby.

Speaking of babies, Lana has tracked down a woman willing to help perform an abortion on her, to get rid of the evil spawn inside her. She explains her situation, gets herself prepared for the procedure… but just can’t do it.
“No more death,” Lana says.
Naturally we had to expect this, as Johnny Morgan – Bloody Face II – has already shown up in the present time frame. Though, it is a truly full-blooded horror scene. Great psychological stuff going on, perfect editing with quick and appropriately disorienting cuts.

The end of the episode is highly fitting, returning us to Johnny Morgan’s problem with women, his longing for a breast on which to feed, as Lana begrudgingly lets baby Johnny suckle at her own for milk; all the while clenching her fists, hating each moment. So there’s an incredible cyclical movement to this episode, I love it.
The next episode is “Continuum”, the penultimate episode of Season 2 Asylum, and is directed by Craig Zisk (credits include Shameless, Nip/Tuck, NYPD Blue, Weeds, and much more).
Stay tuned for the next one back here at FatherSonHolyGore!