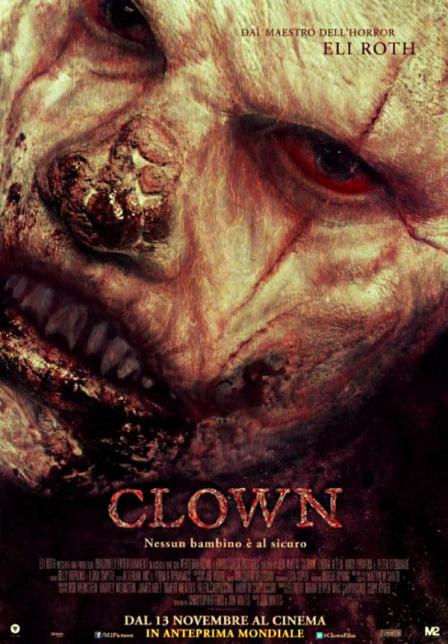 For some, clowns as they are simply frighten. Others, such as myself, don’t really find clowns that scary to begin with, unless it’s Tim Curry’s Pennywise from It. Mostly I think people have a problem with the painted face, the hiding of the true self; something dishonest and creepy they see in a clown hiding themselves behind a weird, some times sad or happy face and trying to make others laugh supposedly.
What’s interesting about Jon Watts’ Clown – through a ballsy move it came to be produced by Eli Roth and the Weinsteins due to the filmmakers putting out a fake trailer with Roth’s name on it – is that the film tries to take the clown into a mythological realm. All the while grounding things in a very physical realm with a shade of David Cronenberg influence coming, as the clown takes on aspects of body horror.
From the director of Cop Car with Kevin Bacon comes a glimpse into a world of clown horror many might not have wanted in the first place. Me? I dig it. So fucking hard you wouldn’t even believe. Despite the few problems I have with the film, Clown is appropriately scary, brutish, and unnerving where it counts, making this one hell of a surprise horror movie I’d not anticipated to take me on the ride it ended offering up.

When Jack’s (Christian Distefano) parents face the possible disappointment of their boy after a clown cancels on the party, his real estate agent father Kent (Andy Powers) finds a clown suit at one of the houses which he looks after. Dressing up in the costume, he entertains the party full of children. However, afterwards the suit doesn’t seem to come off.
Kent tries everything, even attempts to cut it off to no avail, until it leads him to the suit’s previous owner Herbert Karlsson (the ever interesting Peter Stormare). Not allowing himself to believe the suit may be something far more sinister than simply the costume of a clown, Kent fights off the grim realization that not being able to take it off is only the beginning.

Right off the bat, one of the only things I’m not overly thrilled by in this film is the cinematography. There are a several times, specific scenes, which looked gorgeously horrific. A lot of other scenes feel very basic, or generic I should say, as if reflecting not indie film but daytime television. Not to say it’s all bad, certainly not. I just think a film like this could’ve used a more steady atmosphere. The tone of the film works really well, from beginning to end, as both campy and also real dark. But the atmosphere itself is unbalanced and if Watts had crafted the scenes with an overall better aesthetic, one holding through the entire time, I truly believe this would’ve been an amazing horror movie. It’s still damn good, but there’s a degree of wasted potential I feel slipped past Watts and the crew.
Another problem I had is the score. Once more, I wholeheartedly feel this is another aspect which could’ve benefited the film, yet they instead chose to go subpar. There’s a very Goosebumps feel in one scene I remember vividly, as Kent (Powers) is driving in the car with Karlsson (Stormare), and it just felt not even campy; it was an embarrassing scene, honestly, which would’ve become full of tension and suspense had the look and the music been different, in turn working together differently.
These aspects together, or apart, don’t ruin Clown for me. I’m able to look at a film and see the parts I don’t like, while (hopefully; depending on how bad it gets) also finding things which really thrill me. There’s plenty in this horror movie I find effective in other ways, despite the few flawed pieces I’ve already mentioned so far.
On to what I do like, and even love.

The Cronenberg body horror influence comes into play early on and it’s a big part of why I love this movie. Starting in the beginning, I already found Kent dressed as a clown highly creepy. The pasty faced makeup, the pale costuming, it’s all unsettling to see honestly. Like I said, I’m not even scared of clowns, not at all in the slightest. But something about the costume alone strikes a deep, weird chord in me.
The fear further sets into my bones once Kent finds himself going through the body horror motions, the clown costume literally consuming him and beginning him to consume the flesh and blood of children. To watch Kent basically deteriorate, mentally and physically, it’s all very haunting. His body changes with every passing day he spends in the suit – or as we discover THE SKIN – of a clown. Bringing in the mythological side of things introduced with the Karlsson character, the clown transformation becomes something of pure nightmares, an unadulterated trip and fall into terrifying madness.
Makeup effects are a huge thing here. Not only is the transformation itself stunningly creepy and nasty in many scenes, there are bits of blood and gore to enjoy as the sick horror hounds we are proudly. For instance, when Kent tries to blow his brains out, it’s sickeningly tragic and a nasty little treat: his brains eject from the back of his head in multicoloured rainbow, which I found equally funny and disturbing all at once. Really grim, but so effectively wild and brutal.
As Kent continually gets worse and worse physically, his face just crumbling into an eternal clown face of agony and monstrosity and pain, I found myself marvelling at the makeup work. It’s honestly something to behold! Even the damn poster for this film is creepy as all hell. There’s plenty to be said for this aspect of the film and I think without such expert makeup work, as well as the practical special effects, Clown wouldn’t have come off so deliciously vicious. 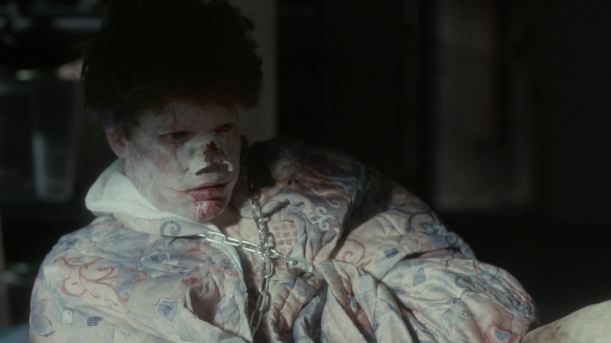 Funny enough, for all the heavy handed bits (I love those too), this movie does pack in a degree of subtlety. Like all the child death happening, not that there’s an abundance but it does happen. I think Watts could’ve easily went the route of shock horror, intentionally killing off children in nasty ways to make the clown figure seem even worse than it already came across. In opposition, Watts goes for a better technique in many of the scenes. My favourite is when Kent’s wife comes to find him, holed up in the motel: as she leads him away to the car, shutting the door, we get a glimpse of the bones of a child, picked near clean, a young boy we’d seen interact with Ken earlier. This could have been presented as a vicious moment, yet Watts prefers to withhold a bit, at least until later on. Once things move further, especially towards the end, things do get slightly more graphic. It’s the building up of the tension and the subtlety at first which I find a great touch, and certainly it pays off by the end of the film.

Even with some gaping flaws, I still find Clown a 4 star film. Not perfect by any means, Jon Watts really throws a ton into this film and makes it worth our while. I wanted better music, a much different score than ended up in the finished product, and also hoped to have a better aesthetic cultivated around the creepy subject matter. Regardless, this is a solid horror and it takes the fear of clowns to an entirely new level! The mix of body horror here helps Watts take a mediocre horror and instil it with an almost epic quality. Ignore the few problems and I found myself a new cult classic in the making. Guaranteed this will at least chill your blood once or twice, even if only in terms of the clown makeup and Kent’s bodily deterioration into a clown out of the most phobic person’s worst nightmare.
Beware the painted face and the fake happy smile of the clown! It could be a mythological beast waiting to emerge, to feast on children.