Alejandro González Iñárritu is a director I’ve admired for a while. Around 13 years ago I remember seeing Amores perros on television; I went on to get the name of the film tattooed on my wrist, after it became a favourite of mine. Pretty much every one of his films since have been magical, in some way, shape or form. Whether it be the story itself or just the way Iñárritu serves it up for us, the movies he makes are unique and exceptionally made overall. This one is no different.
And while I definitely believe The Revenant is one of the best films of the past 15 years, I wasn’t totally pleased with the story. Lots of fun, no doubt. It’s the distortion of what’s known about Hugh Glass, the focus of the story; I know films get dramatized, and I love parts of what this screenplay added onto Glass at times, yet there could’ve been plenty intensity without all that. Nevertheless, with Iñárritu alongside composer Ryuichi Sakamoto, the immensely talented cinematographer Emmanuel Lubezki, plus a host of others including Leonardo DiCaprio and Tom Hardy, The Revenant has the goods and also gives us an interesting, intensely raw modern Western. 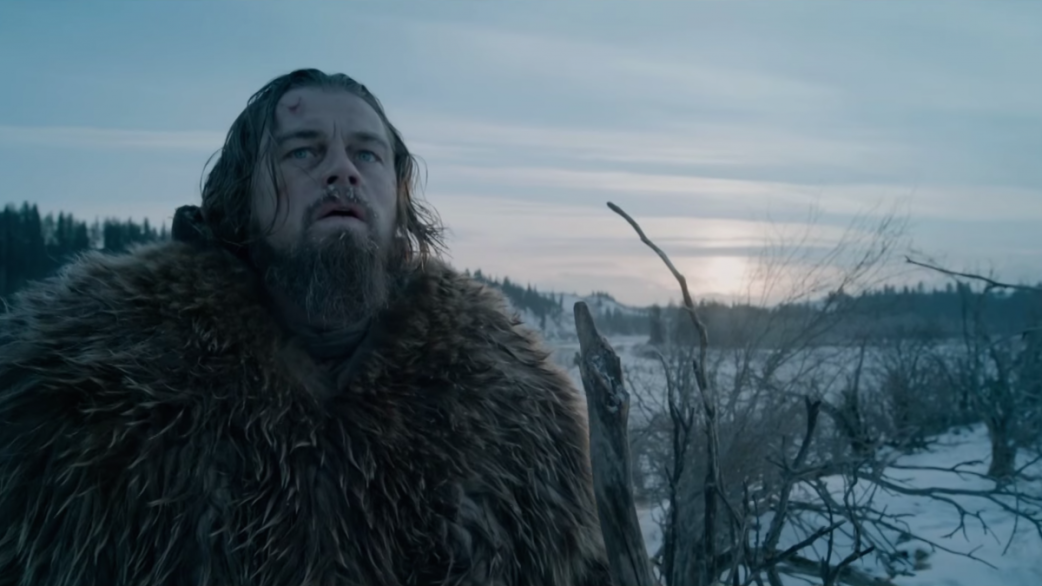 During a trapping expedition in 1823, Captain Andrew Henry (Domnhall Gleeson) leads a party of men through the wilderness of America. In the party are John Fitzgerald (Tom Hardy) and Hugh Glass (Leonardo DiCaprio), as well as Hugh’s son, a native boy named Hawk (Forrest Goodluck), among others. After an encounter with the Arikara, a Native American tribe, the hunting party ends up on the run.
The worst comes when Hugh is mauled savagely by a bear before luckily killing it. Afterwards, Fitzgerald suggests putting Hugh out of his misery, though, others are much more willing to try and help. What little they can, anyways. When a young Mountain Man Jim Bridger (Will Poulter) and Hawk stay behind along with Fitzgerald, Captain Henry instructs that if and when Glass succumbs to his wounds, he’s offered a proper burial.
Only Fitzgerald ends up doing the unthinkable, killing Hawk in an argument, then convinces Bridger with a lie to leave Glass to die, half-buried in a grave.
But Hugh survives. As Fitzgerald and Bridger move back towards an American settlement, Glass tries to hang on. Hoping to cross their paths again. 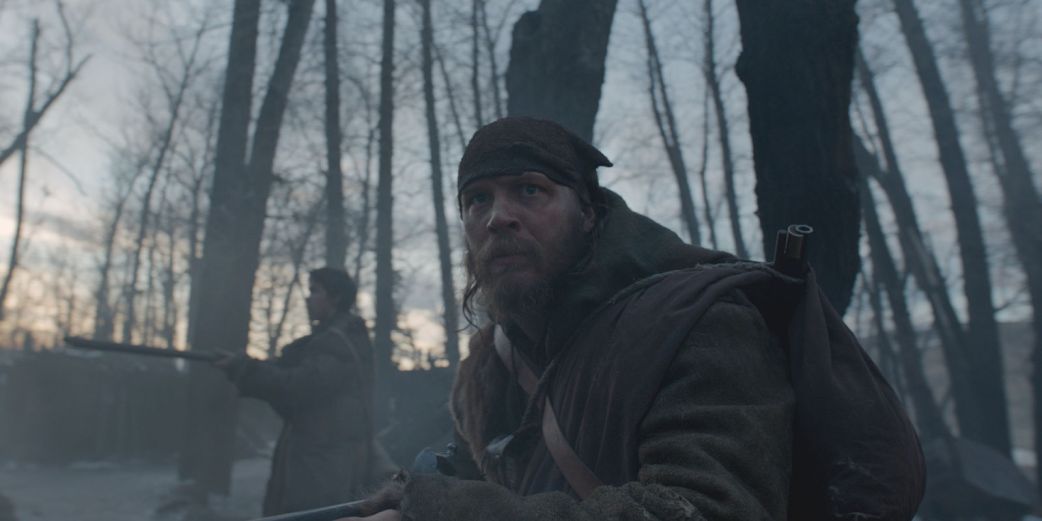 Between the scenery and Emmanuel Lubezki’s wonderful eye, as well as Iñárritu and his vision, the look of The Revenant lingers with me. All the shooting with natural light truly is gorgeous. And it isn’t just how nice things look either. The forest, the people, everything feels raw and untouched. Nasty even, at times. It makes everything look better in that the stripped down cinematography helps the realism. There are so many amazing sequences, one after another. Possibly my favourite are a couple of the dream-like moments in the screenplay where Glass sees very wild images. I like that there are these surreal pieces thrown in now and then. The whole film has plenty of typical but awesome Western imagery, on top of that Iñárritu shows us these vivid, strange scenes where Glass is almost outside of himself, outside of the world. A bunch of action sequences in the movie are completely worth the salt, including the opening moments depicting a run-in with a Native American tribe which drives Glass, Henry and the others out into the wilderness, down the river. The movie starts off with a big bang. But it’s not like a typical action movie, the cinematography and the entire production just pulls you into that world, the space of these characters so immediately. 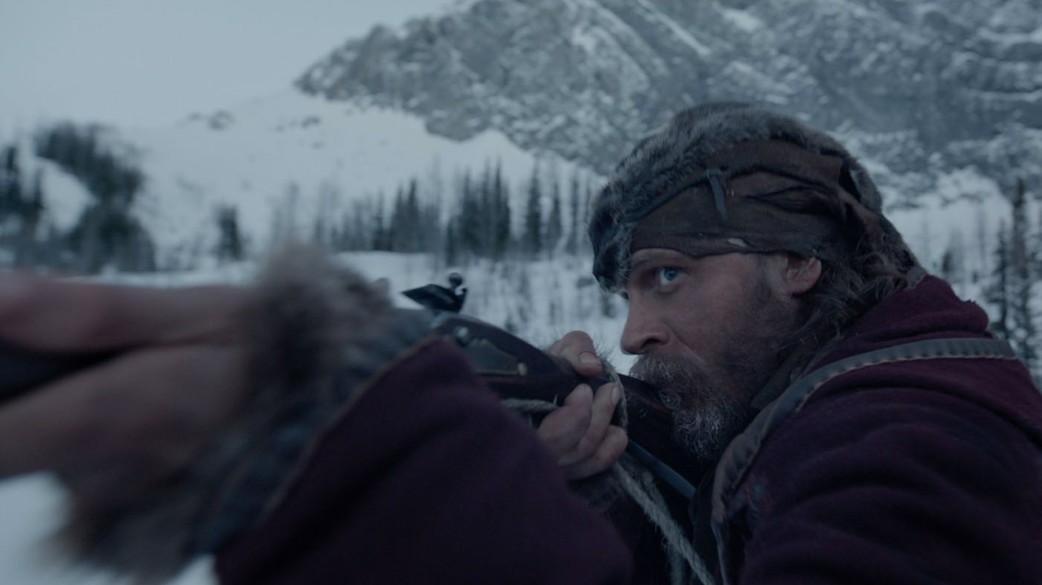 Everyone onscreen throughout The Revenant does a fantastic job, even the small roles played by the likes of two actors I love such as Brendan Fletcher and Kristoffer Joner. Then we’ve got Will Poulter depicting Jim Bridger at age nineteen before he went on to become the fabled Mountain Man (though his actual involvement in Glass’ desertion is debated historically); Poulter pulls his weight, that’s for certain.
But the showcase comes from Tom Hardy and Leonardo DiCaprio. The way Hardy oozes menace even without saying much is a testament to his acting ability. Apparently he drew from Tom Berenger in Platoon, which I can absolutely see. There’s a great cinematic villain here that will stand the test of time in the Western genre.
DiCaprio gives what is arguably his best performance. No hype. He gives the expected grueling performance at certain times. Then at others there’s a perfect silence about his disposition. We could get bored watching him. Instead, he says what more often than not Glass actually can’t, with his face and eyes instead of tons of exposition. Most of all, the determination is visible at every moment, his inextinguishable courage always present. The vulnerability of Glass’ character, alone in the wild, is also something Leo gets across because of the youthfulness in him, but even more so due to the fact of his nuance as an actor. I’ve always enjoyed the range DiCaprio has displayed over the course of his interesting career. Here, The Revenant gives him a chance to show a ton of that, from start to finish.

Even with the historical liberties taken story-wise, Iñárritu’s film is a 4 star production. Top to the bottom, all aspects of The Revenant fire on every available cylinder. DiCaprio and Hardy put on an absolute clinic, as far as acting goes. Then you’ve got Gleeson and Poulter in supporting roles that add plenty to the whole show. But the technical side of things, the filming (and even the CGI on the bear which was incredible), the work that went into every aspect from the amazing score to the locations and everything in between, it’s all so admirable. Sure, there are lots of homages to other movies, scenes that felt very similar to other older Westerns and so on. Yet there’s too much here to find enjoyable, too many well designed and filmed sequences to say The Revenant is anything but excellent. If anything, I wish they’d have stuck closest to the true story because that alone makes for a great story. For all his realism, Iñárritu doesn’t seem to worry about the discrepancies between the real events and this semi-Hollywooded version.
Nevertheless, see this in theatre, don’t wait until it’s out on VOD or Blu ray. This first and foremost needs to be watched on a massive screen. Take it in. A great movie.