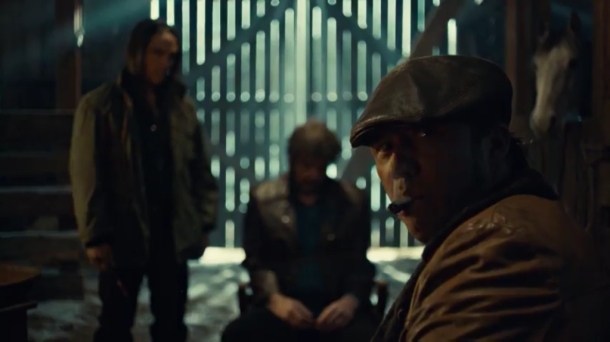 After the incredible opening episode, Fargo moves further into Season 2 with “Before the Law”.
This episode begins with more of the stylistically awesome editing, loving the splits-screen and how they use it at various intervals. Nice montage to start with Bobbie Gentry’s “Reunion” playing over top. We see glimpses of almost all the characters here and I thought it was a good way to start things off.
Floyd Gerhardt (Jean Smart) is dealing with the aftermath of her husband’s stroke. A Gerhardt nephew, Charlie (Allan Dobrescu) – whose father is Bear (Angus Sampson) – helps his grandma out with “the bank“. Out in the barn, Dodd (Jeffrey Donovan) is viciously interrogating some poor guy with his partner in crime Hanzee Dent (Zahn McClarnon). Meanwhile, Mike Milligan (Bokeem Woodbine) and Joe Bulo (Brad Garrett) have also come in from Kansas City to see the Gerhardt clan.
Plenty of things happening. Seems there are troubles within the family, let alone anything else outside of their ranks. Dodd wants to be the boss of the family now that patriarch Otto (Michael Hogan) is temporarily – and most likely permanently – out of the picture as figurehead. However, even his brother Bear believes their mother is the proper candidate. A tense little scene where we see how there’s not much real love in the Gerhardt family, it’s all about politics and hierarchical structure. Not saying they don’t love one another, but more that their family is built around an empire. It’s more a business than anything.
Dodd Gerhardt – with his right hand man Hanzee – is not letting his mother’s newly found leadership get in the way. They’re plotting something, planning. We’ll see exactly what that is sooner than later.

Floyd: “That’s what an empire is – it’s bigger than any son, or daughter.”

One big pot of jumbo going on here. So many complexities happening. I haven’t even mentioned the fact of Rye (Kieran Culkin) having been killed in the last episode by Ed and Peggy Blomquist (Jesse Plemons/Kirsten Dunst). The rest of Rye’s clan think he’s off either getting laid or doing something else just as trivial, in their eyes. I keep wondering how this is all going to come together, a big SNAFU of epic criminal proportions.
Heading away from the Gerhardt home, Bulo and Milligan have a conversation about their job. Seems they’re going to try divide and conquer among the Gerhardt boys. The first suggestion from Milligan, Rye, is obviously not going to work out.
Usually I find Ted Danson sort of… tedious. I’m already loving him in this season of Fargo. This character has a good deal of depth off the bat. Hank Larsson (Danson) and Lou Solverson (Patrick Wilson) are very believable together as father-in-law/son-in-law buddy cops. Added into that situation is Lou’s wife, daughter of Hank, Betsy Solverson (Cristin Milioti). I think the three-way dynamic between these actors and their characters is beginning very strong. Look forward to seeing more of them with each passing episode. 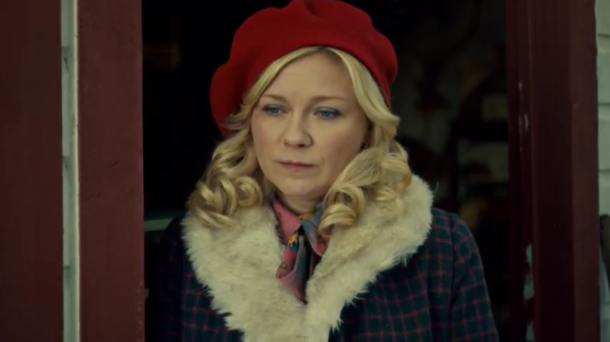 I feel bad for Ed Blomquist. Peggy really did him dirty with the whole accident and not telling him. What did she think would happen? What was Peggy planning on doing? Very clear Ed loves his wife, if not he wouldn’t stick by her so closely. Her transgression has really put them both in a terrifying place. Not only that, Ed has to deal simply with the fact he took another man’s life. Regardless of how it happened, what went down, he still killed someone. Cannot be easy to live with.
Really, though, I’m sure Peggy will be the downfall of them both. At least in terms of public image. She is so nervous looking and her disposition is totally off when around others, so I can almost see it coming right now. She’s too edgy while Ed appears level headed and focused on making sure they don’t get caught.

Milligan pays a visit to the shop where Rye had previously been conducting his business with Skip Watson (Mike Bradecich). He’s tracking down the youngest Gerhardt. A real great scene here, which shows the solid acting abilities of Bokeem Woodbine; an underrated actor. He pulls Watson’s tie into one of the IBM typewriters, looking for information on the Judge killed over at the diner in “Waiting for Dutch“, then follows up with a little story about writing a letter to General Electric and some questions. It’s such an expertly written scene, something I’m coming to expect from Hawley. 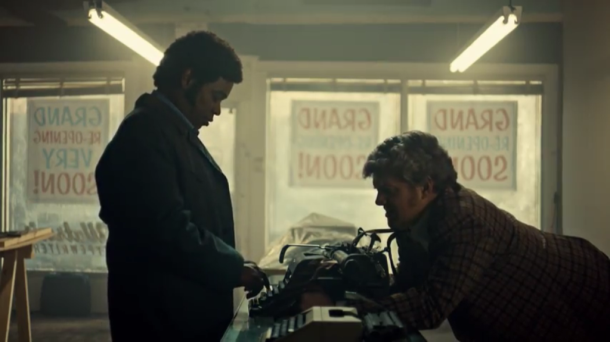 Jesse Plemons is someone I think is also underrated. After his turn on Breaking Bad, playing a very unlikeable character (though he played him well), here he gets a bigger role, as well as one with even more under the surface. Watching him clean up the mess his wife made, first the car and bleaching the garage floor then in his underwear burning bloody clothes at the fireplace, you can tell he’s even come a long way just since Breaking Bad. The Blomquists story is a part of this season I’m already super invested in personally and I’m sure there are going to be more little tragedies for them the further we go.

One of my favourite scenes of the season already comes when Lou Solverson goes over to the diner. He heads inside to have a look at the nasty crime scene. Outside, his daughter and wife play in the snow. Then when the little one picks up a deflated balloon, Betsy ends up finding the shiny silver revolver Rye used in the murders. Sort of a bittersweet moment because it’s awesome she found the gun, also sort of darkly funny the way Lou was inside with all the blood and death, as his wife and daughter are just outside, having fun in the angelic white snow. Perfect sort of Fargo moment of juxtaposition.

Right afterwards there’s an intense scene. Milligan and his henchmen are pulled over by Larsson. There’s a bit of messing about, with Milligan playing games briefly. Honestly, I was completely on edge from the moment Larsson stood in the road and their car showed up. Ted Danson has such an outstanding degree of suspense in his own eyes, such a burning stare throughout the confrontation, you’ll find it very hard not to fall in with how tense things feel. I actually let my breath out slightly once the scene faded into the next. Wow.

Still, I’m most interested in Ed and Peggy. More so Ed, though, as he’s carrying the major brunt of the entire situation on his shoulders. Just watching him smolder alone in his car, at the meat shop, at home, it’s almost unnerving. Because you don’t know how regular, everyday people will be affected by murder. It can lead certain people into a dark descent. Will Ed be one of those? Will he crack under the pressure, or keep it all together in order to protect himself, his wife, his potential family down the road? One thing I know is that it’s totally fun watching the dark drama play out in front of us. The spirit of the Coen Brothers Fargo is continuously alive and well.
Feeling like a broken record, again there is trouble for the Blomquists. Co-worker Constance (Elizabeth Marvel) ends up finding the stolen toilet paper she’d mentioned earlier, to Peggy – in Peggy’s house. The smallest sort of thing, but in these murder cover-up situations, aren’t the smallest details almost most important? Even worse, now more people – Constance – are seeing the car, the damage, so their dirty secrets are starting to filter out. In a small Minnesota town, secrets like theirs, or any secrets for that matter can easily make their rounds through the locals. The more I see Peggy onscreen, the more I feel she’s going to do something even more stupid than she originally did and the secrets will start flowing like waterfalls. 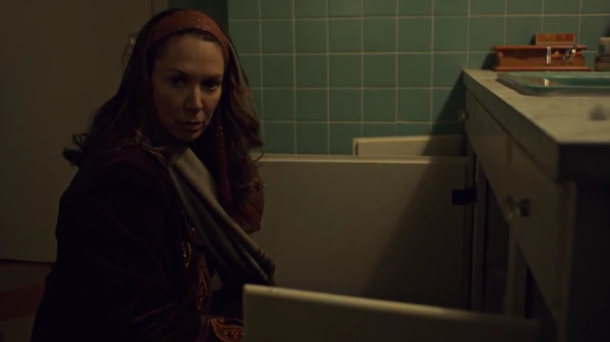 Larsson and Solverson have a nice little conversation nearing the episode’s end. Not only are the idiosyncrasies of these two characters revealed a little more, their talk about “convergence” and “callback” is important. Fargo is a show based around those ideas, that one situation will remind you of another, that things come back to bear on all things relevant; ultimately, the bad keeps repeating, calling back to other bad things, and so on. There’s more to their conversation, mostly concerning the diner crime scene. However, I think a good deal of their dialogue lent itself to the idea of history repeating itself, at least in part. 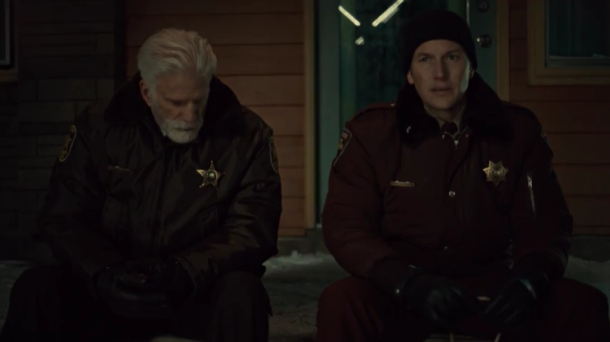 Larsson: “Sometimes I wonder if you boys didn’t bring that war home with ya.”

Ed Blomquist finally finds himself in a tight situation. About time, really, in terms of this season’s plot; may as well get things going full steam. As Ed chops and grinds the body of Rye Gerhardt at the shop, putting it through the machinery like he might a bunch of sausages, et cetera. Amazing shot where he chops fingers off, they roll to the floor and one slips under the door out into the shop! I couldn’t believe it, such a gnarly moment. Plus, the suspense goes up with Lou Solverson out at the door, knocking away. Extremely tense – Lou wants bacon (get it?) for when Betsy wakes up, so naturally Ed invites him in while he cuts off a few pieces. Two excellent actors here bouncing off one another. Great writing. This is typical – and awesome – Fargo type fare, with the music really riling things up, the acting on point and a hairy situation playing out. Kept me on edge for the entire few minutes of the scene.
“The Eve of the War” by Jeff Wayne begins to play over the final shots. So fitting and beautiful and dark at once.

Cannot WAIT to see and review the next episode, “The Myth of Sisyphus”. Stay tuned, fellow Fargo-ites!