James Wan and Leigh Whannell created a brutal and mysterious horror film with 2004’s Saw, which went on to become a wildly successful movie at the box office, so there’s no surprise a sequel was coming. No surprise it went on to become an equal in series length to the likes of A Nightmare on Elm Street, Friday the 13th, and Halloween. The second film in the series is a little less mysterious and more full-on horror – not that the original was shy on the gory, bloody moments – but it’s also got a bit of a crime-thriller feel to it at times as the police and criminals feature heavily in the cast of characters along for the sequel.
While Saw II goes for a slightly different feel, opting for more shocking horror than building a specifically cultivated atmospheric grimness, I do think there are truly excellent horror movie moments that cannot be disregarded. However, the beginning of the slippery slope into the silly label of “torture porn” begins with this sequel and amplifies as the series goes on. Getting a look at the Jigsaw character more is one of the aspects which ultimately saves Saw II from being only focused on the torture and nastiness. Even further, I do feel that Darren Lynn Bousman works well with the tone setup in Wan’s film, allowing this essential aspect to carry through and sustain other elements of this sequel.

Saw II sees Detective Eric Matthews (Donnie Wahlberg) digging into the Jigsaw Killer case, along with Detective Allison Kerry (Dina Meyer). When they head to a crime scene, where several law enforcement officers are injured in the line of duty, they finally discover the killer himself, John Kramer (Tobin Bell), waiting for them. What begins is not only a game between the police and Kramer, a.k.a Jigsaw, it is also the fight for the lives of eight people whom the killer has trapped in huge house, stashed at some unknown location; one of which happens to be Daniel Matthews (Erik Knudsen), son of Eric.
Jigsaw reveals bits of himself, yet it’s always someone else and their transgressions which he is interested in. Things become even more confusing when Amanda Young (Shawnee Smith) wakes up in the house alongside the other seven, discovering herself trapped in another Jigsaw game all over again.
There is no telling who will make it through and out of the house, nor is there any comfort in knowing the police have Jigsaw in their grasp.
Because he also has them in his own. 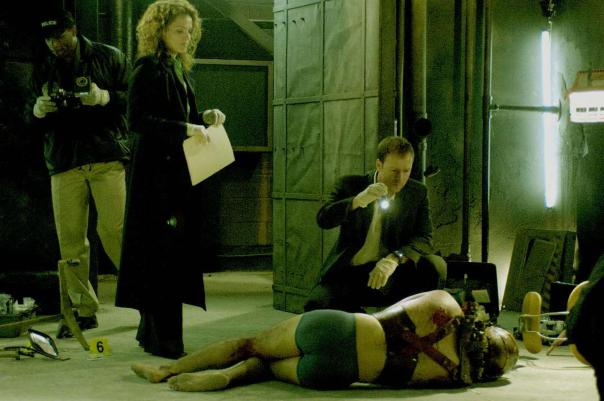 The opening sequences in this sequel is a whopper. There’s a guy alone in a room, naturally greeted by a video of Billy the Puppet with the voice of Jigsaw speaking to him. But it’s the contraption on his head which draws the most attention: like an amped up iron maiden medieval torture chamber except confined solely to the head. I thought this was a perfect way for Darren Lynn Bousman to set the tone for his film; it’s obvious, right off the bat, this one is trying to extend that grim and macabre atmosphere that began in the first. While I don’t think this one holds up exactly to the standard James Wan’s original film set, this opener and many other scenes in Saw II definitely fight to keep up with its predecessor on the level of intensity.

A benefit to this film is that we discover more about Jigsaw, but more than that we’re getting treated to a full dose of Tobin Bell. He is a really fantastic actor and I think this character was almost MADE for him, like destiny. Honestly, when I think of iconic horror villains he is absolutely on that last, and he’s a person who – 20 years down the road – I just can’t see not being Jigsaw, you know? Much like other roles, I find it hard to see anyone else playing this guy because Bell does such great work. For instance, even with all the makeup Freddy Krueger will ALWAYS BE ROBERT ENGLUND (sorry Jackie; love your acting though), while Michael Myers can be inhabited by several actors because the body language is what’s mostly key about his character, same goes for Jason Voorhees. Now that we’re seeing Jigsaw more face to face, as opposed to the first film where we only discover who he is within the final few moments, there’s no way I can separate Jigsaw and Bell.
Not only his looks, his voice is unsettling; calm and creepy, very calculated, with purpose. He also has this weird eye contact thing I love, where he locks eyes with someone he speaks to and sort of holds them in his gaze. Works great for the character because he’s all about the humanity of everything, so Kramer strikes me as the type of guy who is interested in the connection between humans, as well; eye contact being a very intimate connection, which many are not comfortable with, which I think is what interests me about a serial killer (if you can call him that technically) who holds fairly close eye contact with most people to whom they’re speaking. Just an example of why I find Jigsaw/John Kramer an already classic horror villain, little bits like his way of watching people as they’re in conversation really give what could be a one-dimensional character much more depth.

Part of me finds the ingenuity in some of the traps out of Saw II innovative, in terms of horror movies, there’s also a part of me which tunes out to some of the nasty stuff happening. Anyone who has read my reviews, or knows me, understands that I do love a good gore flick as much as other hardcore horror fans. More than that, I’ve been a fan of a few terribly vicious films for years – something sick in me gets a thrill out of Salo, or the 120 Days of Sodom, I recently discussed my enjoyment for cult classic Cannibal Holocaust, and then I love all sorts of other disturbing or gory movies, from American Psycho to Martyrs to Anthropophagous, and many more.
STILL – somewhere I draw a line to the limit of shock horror I find useful or sensible in one film. Certain movies can pull it off and there are many ways to do so. The aforementioned Anthropophagous is straight up madness, however, there are so many weird horror elements within it I find the movie underrated. In opposition, I think Saw II tries to simply go bigger on both plot and shock simply for the sake of it. Though I do find the premise of having Jigsaw throw these eight people into a house, there’s also the fact it’s a bit contrived, and that it seems at times like an excuse to amplify the amount of torture/traps shown onscreen. Saw went for a little more of a contained, smaller style all around from the gore and violence, most of which came offscreen and what didn’t relied on a tensely cultivated atmosphere. Just as I love how Saw III goes back to that dynamic; it still has plenty of torture and nastiness, but sticks with a more manageable amount of characters.

This brings me to my biggest problem with Saw II. I don’t think the acting holds up. Most of all, there are too many characters being tossed around in the script from Darren Lynn Bousman and Leigh Whannell. Not entirely sure, in my opinion, so many characters were required. As I mentioned, part of this I think comes entirely from the fact the filmmakers, and no doubt the studio, wanted to include more gore, more torture, more violence, so adding more characters only seemed natural. MORE MORE MORE!
But more is not always best. I’m not saying less is more, either. I’m just saying: more doesn’t work all of the time. While Bousman tries to hold onto the atmosphere and tone which Wan came up with in this film’s predecessor, part of what hinders their build-up is having too much time dedicated on the many characters included. Especially considering the fact this sequel is exactly 10 minutes shorter than the first. In my mind, this one could’ve benefitted greatly from being ten minutes LONGER than the original Saw, as I could’ve used more reliance on that atmosphere and tone than on the excessively expository dialogue at times and the mounds of additional characters amped up significantly here.

This sequel is only about 3 stars for me. It’s a little better than mediocre, only because I love Tobin Bell so much and I do feel as if Darren Lynn Bousman did a fairly decent job with his first feature working off bits and pieces of what James Wan did in Saw. Added to that, Shawnee Smith’s return is both wonderful in terms of the plot and also for the fact she does great with the role of Amanda Young. I like where everything went thematically, as well as how Jigsaw’s methods become more and more clear now with the people he chooses to put into his traps. My enjoyment of this sequel doesn’t extend much further.
Unfortunately this movie suffers from two incurable problems: 1) the need to include a bunch of extra characters who are frankly not written overly well, and 2) relying too heavily on trying to shock and repulse us with nasty horror/gore than actually genuinely, effectively SCARING US. These prevent this movie from rising above most other horror out there and it’s no better than most of the non-Saw films trying to imitate its style. I don’t suggest this one as a good addition to the series. Like I said, though, I’m a fan of the third particularly above this one; I feel it returns slightly to the simplicity of the first, while also opting for plenty nastiness. See this entry in the series mainly for Tobin Bell and Shawnee Smith, as well as some grim trap designs.