Ever since last year’s Clown I’ve been waiting to see another directorial effort from Jon Watts. Contrary to what others might think and feel, I found that movie creepy, darkly humorous, and downright twisted. A great clown horror movie. So I was surprised that his next feature would be Cop Car, and even further to my surprise the wonderful Kevin Bacon would be playing the lead, a bad guy nonetheless.
The premise of this movie alone intrigued me, but honestly I am a huge Bacon fan and he makes a lot of projects he’s in better simply by showing up. That’s my opinion, anyways. Most recently I dug his turn as FBI Agent Ryan Hardy in Fox’s neat serial killer show The Following, he did an excellent job with the character of Sebastian Shaw in X-Men: First class, then there’s deeper stuff like his turn as a recently paroled paedophile in The Woodsman and the policeman with the troubled marriage from an old neighbourhood in Boston in Clint Eastwood’s fabulous Mystic River. Need I go on? The man has done a few bad ones over his time, but so so many of the films he’s in contain great performances on his part, whether or not the movies themselves match up or not.
With Cop Car, Jon Watts gives us a fun, small thriller that has a tinge of mystery and a whole hell of a lot of excitement. With a pretty sinister performance from Kevin Bacon, this is one of the most fun film experiences I’ve had so far in 2015. The movie isn’t perfect, but it is an impressive example of a little contained scenario where drama and the elements of a thriller collide to great effect.

Two ten-year old boys, Travis (James Freedson-Jackson) and Harrison (Hays Wellford), wander through the woods together, joking around and just being kids. Eventually they happen upon an abandoned cop car; no police officers are nearby, as well as the fact they find a set of keys inside. Taking it on a joy ride, the boys have no idea what they’ve walked themselves into.
Rewind back to before the cop car is left on its own.
Sheriff Kretzer (Kevin Bacon) parks his cruiser in a clearing. He gets out and removes a few things he needs, including a nice big tarp and a dead body. Dragging it down into the woods where he plans on disposing of it, he puts some lye into a dug out hole where the body also goes. Heading back to where his car is, he discovers it no longer there.
This sets off a brutal and tense series of events, as Sheriff Kretzer’s determination sets him after the two young boys, with who knows what sorts of results to expect.

Something I immediately enjoyed about the movie is how natural the young actors are playing Harrison and Travis – Hays Wellford and James Freedson-Jackson respectively. From the opening scene right through to the end, these two are a very good pairing. Their relationship feels organic, as well as the fact they simply seem like two young boys being caught on film, instead of kids acting like kids. There are so many films nowadays where we see kids being very modern and on their phones, computers, and so on, yet not enough where we can see just normal kids playing around, being themselves out in the streets or traipsing around the woods; lots of movies where we see the suburban type boys and girls, but in Cop Car these two kids are the type I remember growing up, knocking about looking for any and al mischief to get into, cursing together like it’s a competition and having a good time doing nothing at all.
On the acting front obviously Kevin Bacon pulls out all the stops. Here, he has a great character and a pretty interesting little script to work with, from the plot itself to the dialogue. What I love is that there’s such an instant sense of Sheriff Kretzer’s intensity. In one of the earliest scenes, Bacon has this absolutely ASTOUNDING look in his eyes; we can see everything right in his face, he knows how devastating things might get with his cruiser in the hands of someone else, there’s this deepness in his eyes, a look set right into his skin, and from that moment I knew his portrayal of the sheriff character would be pretty damn good. 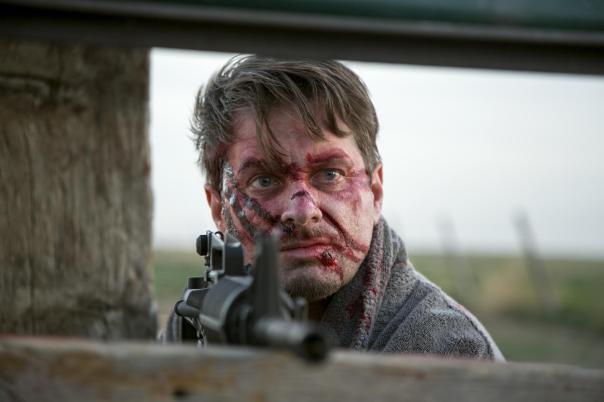 The overall look of the film is nice. Lots of wide open plains in the background, just a PLETHORA of gorgeous looking exteriors. Most of all, I like the score of the film and how it works to set the tone at certain important junctures. For instance, there’s an amazing scene just little before the one hour mark when Sheriff Kretzer is dumping a load of cocaine down the toilet, and the piano piece playing is SO CREEPY. Love it. Really makes it seem like Kretzer is going absolutely mental, out of control, which he is, and the tension is thick. While other times, there’s a great score which reminds me of something you’d hear in a thriller out of the 1970s with a lot of bass and percussion style music happening. There’s an awesome tone coming out of the music and how it’s employed throughout the various scenes which I feel adds to the old school feeling Cop Car has, harkening back to smaller, simpler thrillers from several decades ago.

Once the last half hour of the film begins, I found the next ten minutes or so a little boring. Not so much that they were not good or well written, but the pace sort of lagged at this point when I felt it should still be kicking, going strong. I did like things about the finale, it simply felt like the whole movie bumped down a full gear, slowing to a point while things played out. There’s lots of good tension, though, and I’m not particularly unhappy with where the script takes the story. It’s only the fact the pace slows too much that I don’t find lives up to what the rest of the film was building up to and promising to deliver on. I’m fine with a subdued, more calm finale in a sense, but changing the pace too quickly as things are creeping along and getting the adrenaline pumping, not knowing where the plot will head next, it does the movie overall a disservice.
That being said, I was surprised by what happened in the end. I won’t spoil anything for those who’ve yet to see Cop Car, but be prepared for a nice finish which plays out not as typical as other thrillers out there. The last ten minutes REALLY pack a hard punch, which I’d not anticipated whatsoever. Hold on for a good ride.

I think, for me at least, this was a 4 out of 5 star film. Really fun little indie film thriller which took me by huge surprise all around. Kevin Bacon anchors everything with a creepily sinister performance, on edge at all times and keeping the audience in the same state of suspension. Plus, the two young boys in the film are incredible in their own right. Add in a good dose of tense scenes with a pretty good script and Cop Car is some of the most fun I’ve had watching movies this year.
While some may not be totally satisfied with the ending, I think it’s still surprising even if there are some issues with its pace coming up on the climax. You should most certainly see this if you haven’t, Bacon alone is worth the price of admission.