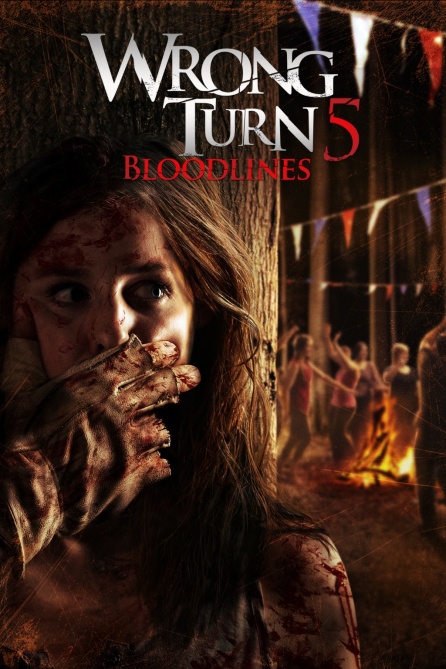 Now, I actually gave Wrong Turn 4: Bloody Beginnings a rating that, in a totally subjective light, it probably does not deserve. However, I can be a sucker for horror movies with a decent bit of practical gore and a creepy asylum out in the woods, and isolated winter settings in horrors, particularly slashers. So, whatever.
But sweet jesus in the garden (I’m not religious that’s just one of those sayings I’d grow up hearing in my days as a good little Catholic boy before I found atheism) – Declan O’Brien seems to have just taken hold of the Wrong Turn franchise and steered it as hard into the ground as he can possibly manage. With Wrong Turn 5: Bloodlines, his efforts get no better. Even worse, the iconic Doug Bradley – immortalized as the villainous Cenobite named Pinhead – shows up here and not only does his character really make little to no sense, he’s just garbage.

I do dig the Wrong Turn franchise simply for the first, second, and yes, fourth, films. Even the fourth is not a good movie overall, but I still dig it. So it’s disappointing to see it keep on going while it gets no better, only worse and worse over time. They’re just milking the entire concept for all its worth, yet – following the metaphor through – there’s no milk left, it’s just like… milking a milked cow? Beating a dead horse works better, but you get the picture.
Although the whole cannibalistic clan in the backwoods trope has been more than fully explore in the horror genre over the years, Wrong Turn as a series has at least had a couple good kicks at the cat (as we say around here – ’cause we’re fucked up where I’m from). Unfortunately, Mr. O’Brien continues to nosedive the series as a whole into the shitter, one bad sequel at a time. 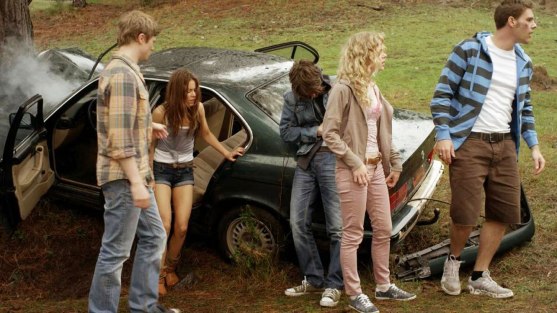 Bloodlines has an even worse plot than the others in the series.
The brothers – Three Finger (Borislav Iliev), Saw Tooth (George Karlukovski), and One Eye (Radoslav Paranov) – along with a serial killer named Maynard (Doug Bradley) escape from the Glensville Sanatorium. They murder people near Fairlake in West Virginia. Complete with very cheesy jokes like when Maynard asks for a hand – and one of the inbred brothers literally holds up a severed hand. HAHAHAHAH SO FUNNY, RIGHT?
At the same time, a group of friends – I won’t bother listing their names because none of it really matters – travel to Fairlake for the Mountain Man Festival during Halloween. On their way, Maynard wanders onto the highway causing the friends to swerve. Naturally the car gets crashed; how’d you know?
When they go to check on Maynard, the old bastard attacks them. They stomp the shit out of the guy until police officers arrive and take the lot of them to lock-up for the night. Of course, one of the young people has drugs on them! So during this big Mountain Man Festival, the friends and Maynard are locked away.

But Maynard warns that his boys are going to come and spring him from the Big House. Everyone thinks he’s talking smack until the brothers descend upon the jail. It’s up to the cooperation between law enforcement, a couple locals, and the out of towner 20-somethings to keep one another alive and out of the grips of Saw Tooth, One Eye, and Three Finger, or their equally disturbed friend Maynard. 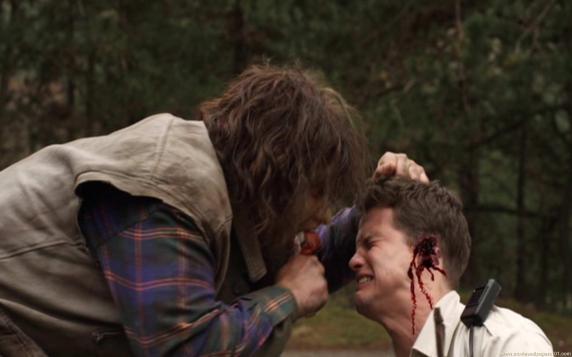 First thing’s first – the inclusion of this Maynard character, played by Doug Bradley. Now, I’ve honestly never really seen Bradley in anything other than Hellraiser. Well, Nightbreed, and then there are a couple brief cameos such as during The Cottage, and more recently in Exorcismus. Regardless I love Bradley as Pinhead, there’s honestly nobody else who is ever going to be able to replace him. I feel like certain iconic horror characters, one of which is Pinhead, have such a specific persona that it’s hard to let another actor take that on. For instance, I think it was easier for different people to assume the role of Michael Myers or Jason Voorhees simply because of the silence, the mask; not to say there wasn’t a particular way they both walked, moved, reacted, because there absolutely was, I just feel when it comes to emotion there is none with them so it didn’t require too much true acting (not meant to disrespect the wonderful actors who’ve played both Michael and Jason – much love and respect to them!). But when you look at someone like Pinhead or Freddy Krueger, their vocal tone and the way they say things, though able to be replicated within a certain degree, is a specific part of the character’s make-up. I mean, the newest Nightmare on Elm Street, the terrible remake, had an amazing actor (Jackie Earle Haley) play Freddy, but you just can’t have Freddy with Robert Englund. You can’t, because that guy has the charisma of Freddy; he is, was, always will be Freddy.
So, that was a ramble, about completely different movies. Just saying, I love Doug Bradley. Solely because of Pinhead. In Wrong Turn 5: Bloodlines, he does his best with what he has been given by writer/director O’Brien, but the character of Maynard makes no sense. He takes up a good chunk of things at times during a film that’s centred on the bad guys being inbred backwoods hillbillies, crazy cannibals, yet there’s Maynard, an apparent serial killer, all smooth talking and normal.
It makes no sense. I hate his character. 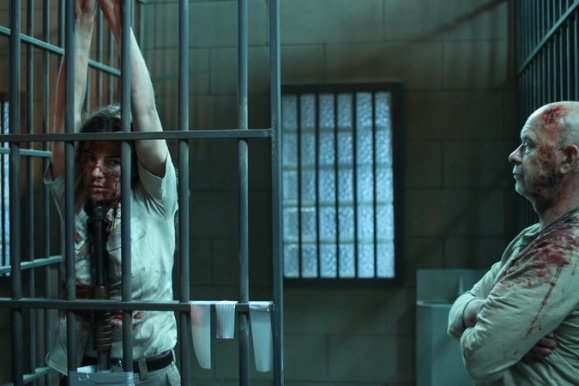 Even worse is the fact that he’s not just a bad character, Maynard – he is jammed into the script, messing with an already feeble story. Maynard sort of bosses these brothers around, and that’s just completely nonsensical. I’m not looking for the Wrong Turn series to reinvent or innovate the horror genre, turning it in some new direction. I’m not even looking an elaborate plot. However, there’s got to be common sense, even in this survival horror type of stuff these films have going on. What I’m saying is – there’s an early scene where Maynard cranks one of the inbred brothers with a wrench, the cannibal goes down. He grabs his face, looking as if he’s hurt.
SORRY DECLAN! YOU SHIT THE BED THIS TIME!
These inbred cannibal brothers are said to have a condition where they can’t feel pain – I forget the exact name. They say it in Wrong Turn 4: Bloody Beginnings, back in the 1974 scenes at the asylum. Yet Maynard whacks the guy with a wrench, that’s all there is to it. I mean, c’mon! If this were any bit sensible, the brother wouldn’t have even moved with the wrench’s force, he wouldn’t murdered that Maynard idiot, and moved on to the next kill.
Then it leads me to: how did Maynard ever get to a point where he was able to reason with these brothers anyway? They’ve got no loyalty other than to one another. Anybody they come across it seems the brothers just attack, kill, eat, whatever. So how did Maynard manage to even gain dominance over them? Sure, I’m reading way too deep into a cannibal horror movie. But am I? This movie, the whole series, is not complex, so can’t Declan O’Brien at the very least write a decent script that’s logical? Not really that hard. This could’ve just had sensible writing, if anything, and even with all the terrible dialogue O’Brien comes up with there at least would be common sense, characters that weren’t just thrown in for no apparent reason. 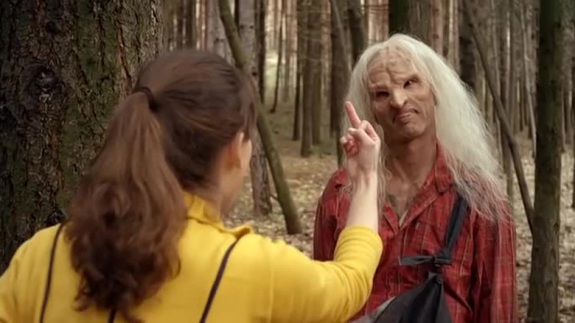 There’s not a single redeeming quality in the entire movie – acting is all atrocious, even Bradley can’t save the sinking ship, and the blood/gore is all as bad as it gets in any of the films. At least early on the practical effects were still decently done, well enough to keep a horror fanatic interested (I think most of that died after Wrong Turn 2: Dead End & Joe Lynch).
Wrong Turn 5: Bloodlines is a 0 star film. I really can’t bring myself to give it any stars whatsoever. There’s nothing worth giving a star. Not even Bradley, because the character itself is so god damned useless to the whole story overall that it boggles my mind.
Declan O’Brien can’t even keep together the meagre plot of the film because he seems to have trouble following the logic of the Wrong Turn series, and worst of all he can’t keep straight things that he himself wrote in previous instalments. I wonder how much they offered Doug Bradley to do this movie, I’m also pretty curious if they looked at anyone else other than him first in terms of well-known horror names – because obviously the character of Maynard was an excuse to put a recognizable face into the film. There’s no other reason to have that character in there unless to put someone noticeable in the part, it did not in any way add to the film’s story and certainly was not a memorable character. Not to mention there’s a sequel, and I’m more than positive Maynard is nowhere to be found there. Makes no sense whatsoever.
If you want to complete the whole series, go ahead. Otherwise just skip this piece of garbage. They replaced O’Brien for the next sequel, not that it would do much of anything to help. This series has gone steadily downhill since the first film, though the second was good (plus I’m guiltily into the 4th movie). Time to call it quits, but I hear they’re setting up a 7th instalment for 2016/2017 release. Wow.