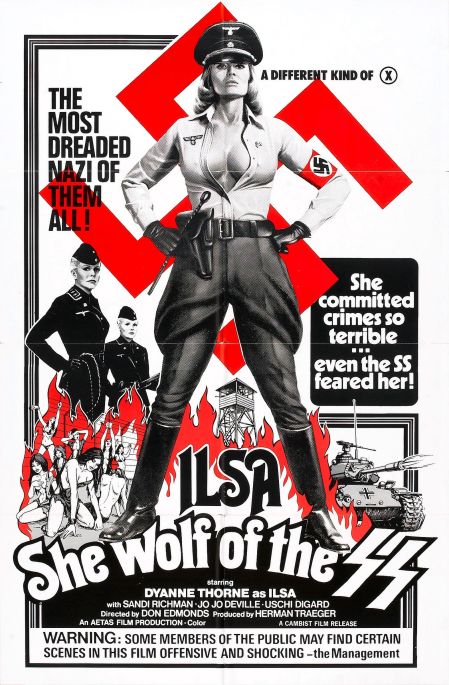 Right away this movie really explains itself as being in poor taste, as there is a quote by the film’s producer (ironically not using his actual name on the bill) about how this film is based on atrocities actually committed, and how they hope these things will never ever happen again. It’s almost insulting really. Luckily, I’m not easily insulted whatsoever.
Immediately, you know Ilsa: She Wolf of the SS is a very campy bit of exploitation (if you couldn’t already tell by the title which is in itself dripping with 1970s trash cinema). The film follows Ilsa, the commander of a Nazi prison camp, who uses men to prove women can endure pain more easily than man, and should be used in the armed forces.  The experiments she conducts are beyond sadism; they are violent murder and torture inflicted upon prisoners in her camp.
Every single day, Ilsa chooses another male prisoner to rape. If not satisfied (Ilsa is downright ravenous for dude meat), she then has her nightly lover put to death; most likely after having his man-parts lopped off.
What goes on in the plot is a lot of garbage. I mean, not that I ever expected much more, but it is really brutal. Basically, this is an excuse for B-movie exploits and a whole lot of shots of breasts. The whole film opens to the sight of Dyanne Thorne’s big breasts, as she rides a naked man. Even while Ilsa is working in her lab, her uniform is ridiculously tight, her bust nearly flopping out; there’s no real attempt to hide the fact the filmmakers just wanted to show off a lot of gorgeous looking women in scantily clad attire and various other states of undress. 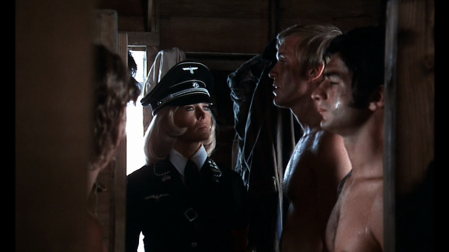 There is a lot of hype about this film. I don’t think it’s particularly that many people who say they like Ilsa believe it be a great work of cinema or anything. I mainly believe it’s because this is one of the most notorious B-movies that used the Nazi exploitation to make a twisted and strangely sexual movie. I can certainly tell you this is not a good film – not even in the least. There are bits of this film that could have been good had they been worked in different ways, however, the entire film is just poorly done. The concept might fly if it were treated in another fashion. In Ilsa: She Wolf of The SS, unfortunately they are not treated in any fashion except for sleazy – and not in any sort of good way, either.
There isn’t much interesting to say about this movie. The acting isn’t great. Not even from Thorne; she is very one-dimensional both as an actor and a character in general. The supporting roles are just as terrible. There are plenty of small characters here, and every single one of them is awfully portrayed. There isn’t a whole lot that can help a film as poorly made as Ilsa, but maybe if there were a performance or two, even just the one single performance, which came off well it might not be so easy to condemn the whole damn thing. But, to no surprise, there is nothing worth seeing here in regards to performances. Not to mention the general ugliness of the entire film. This isn’t even one of those rape-revenge sub-genre films where we are made to watch a woman suffer hideous torture, and rape, and then comeback in the film’s second half to brutally slaughter and torture the ones who did those things to her originally. This is just an all-out shlockfest of madness and torture and full-on depravity. Plus, there are a ton of breasts to watch hang and bounce around for any pervert who doesn’t actually want to watch a movie, and just wants to see naked women. Me? I don’t need to watch a film for that – none of you do. This was just an excuse to see some big breasts in a Nazi uniform, as well as give the filmmakers a chance to film (what feels like an endless bunch of) debauchery. 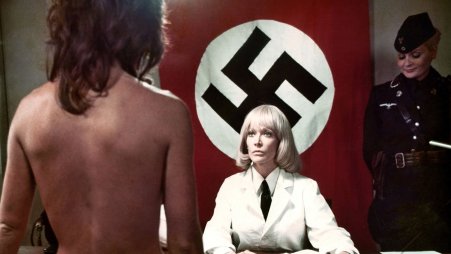 I can’t give Ilsa: She Wolf of the SS any more than a 1 out of 5 star rating without feeling terrible about myself. I know most people go into this realising there will be no groundbreaking cinema or performances, but still – there are so many mentions of this film if you look at directors and writers who are fans of the exploitation films in the 1960s and 1970s. I just don’t get it. Sure, it’s a good example of exploitation, in the sense that it shows exactly what exploitation films are in essence. That being said, it isn’t a good example of a good, well-done exploitation film. It’s a great example of how a film, in general, can be poorly done. There’s nothing here that needs to be remembered. They could have done a good job. Instead, this just turns out as a whole lot of awful scenes strung together with some gory bits now and then and a ton of sex, all edited into a perceived cohesive structure. Although I don’t understand how anybody could say this a good film, there are those out there saying it’s a great B-movie. I can think of many other B-movies which aren’t terrible like this. The essence of B-movies and exploitation pictures is that they’re sort of low-quality in some ways. However, that does not mean they’re meant to be utterly terrible films with no merit whatsoever. There are lots of great instances of exploitation I really love, but this is just not one of them.
Pass on this and check out something else. Anything else. For the sake of your time and your brain – find a better film experience to enjoy. You won’t enjoy anything about this. I only gave this a 1.5 rating because there are a few scenes where people actually act, and there’s a bit of sensible dialogue, where you aren’t forced to endure pure sadism and needless nudity.
Just to be clear, I love a lot of gory, perverse films. Even some of the others I’ve reviewed before this are pretty disturbing. A lot of the DVD and Blu ray titles on my shelf are horror; some of which are extreme, so to say. This is not why I don’t enjoy Ilsa – I’m not afraid of something disturbing and depraved. I just think there is a way to go about that sort of film. In no way, shape, or form did Ilsa achieve anything good in the way other twisted films of the like have both before and after. That’s my problem with this one. Other movies, such as The Last House on the Left (the original by Wes Craven), have used brutality in ways which really worked, but instead Ilsa chooses to do nothing with the material at hand and produces a really forgetful, tasteless film with no redeeming qualities.
And to think, this thing kicked off three sequels, each more awful, tasteless, and unnecessary than the last (one of which was directed by the highly overrated Jesús Franco – did I say that?  Yes I did). Avoid these movies like the god damn plague if you can. Unless you really want to see them – as a cinephile, I see everything. Whether or not the films all turn out great, or if they’re shit, I still see them. Especially if they’re mentioned a lot, as this one frequently is by the likes of Quentin Tarantino, Eli Roth, and Rob Zombie, to name a few. If you’re looking for a quality 1970s flick – look elsewhere, far elsewhere, in the very opposite direction.