A lot of people think this documentary, and The Brian Jonestown Massacre themselves, are the greatest. My opinion differs.

I enjoyed this documentary, but only because it was a fairly thorough look at how the music industry often works [in all its strange and pitfall-littered glory] by parallelling two bands’ journeys: The Dandy Warhols & The Brian Jonestown Massacre.

I did not enjoy watching Anton Newcombe being praised as a genius and some sort of musical god by people who are clearly too spineless to be honest with someone about how big of a maniac they are, or witnessing unfortunate audiences who paid money to see a show only to see a regression of the BJM band into ego-filled, hysterical fights.
I really think Joel Gion is one of the more narcissistic people here, aside from both Anton and Courtney [these two listed in descending order of first and second in obnoxious narcissism].  It’s unbelievable to see the absolutely brazen, ignorant bliss this man is in because he, for some reason, thinks Anton is akin to the Second Coming of Christ [another overhyped celebrity – but that’s another story].  Gion plays the tambourine.  That’s it – as far as I can tell.  The fact he presents himself as a percussionist is not only funny, it’s sort of insulting to people like friends of mine – Andrew Bartle for one – who are real percussionists, capable of actually playing at least several, if not many, percussion instruments.  And well.  I’m not saying you can’t be a good tambourinist because you certainly can.  I just think this guy’s head is swollen almost bigger than Anton’s, and at the very least Anton is a multi-talented guy – Gion is pretty much a one-act type of guy.  Yet he acts like the biggest rockstar to ever grace planet earth.  I think, in a nutshell, Gion sort of presents what the whole aura around The Brian Jonestown Massacre is: a big nebulous entity of bullshit. 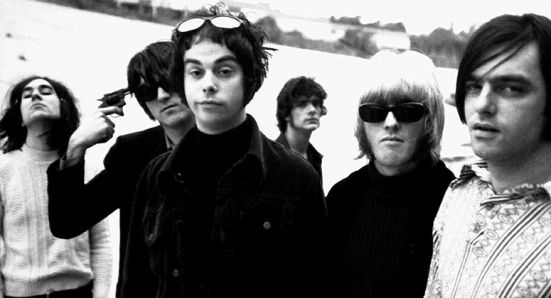 The documentary succeeds by taking a scathing look at both bands, but most certainly focusing on the volatile nature of Anton’s personality. It does not succeed in making you like Anton, or Courtney for that matter; the latter is not nearly as egotistical, but often falls into diva-ish behaviour while condemning others for acting the same way.

My only opinion on Anton is this: BJM makes good music, but for people to drool over him, and say he is a musical genius, or one of the best musicians ever is foolish. Sure, maybe he had a hand in starting the whole 60s revival that is so fully in swing now in all its hipster glory, but the fact remains his music is completely derivative of the 1960s and 1970s. Yes, Bob Dylan was building on what musicians like Woody Guthrie and Robert Johnson had done before, but he made something new out of it, and fashioned it into a way to ‘fight the system’, or at least wake people up to TRY and fight it.
Anton doesn’t come with a message other than “I AM ABSOLUTELY CRAZY”. I don’t care if he plays 80 instruments, I don’t care if he puts out three albums in 1996, I don’t care how many recording sessions in various places across the world he does- nothing changes the fact that he acts like a spoiled brat who didn’t get what he wanted, and throws tantrums, or belittles those around him.
I am a musician- when somebody fools up on stage, you don’t stop and freak out or hit somebody, you just keep playing because most times NOBODY notices. Yet Anton claims he is a musician, and trashes a show just because someone didn’t hit the right chord or slightly messed something up [get over yourself – it’s a live show!]. All the while everyone around him simply puts up with it, and claims he can’t get a deal because “he won’t conform”. I’m sorry, but beating up your band or throwing a 12-year old girl tantrum on stage because of something so minor is not non-conformism.. it’s simply a boy who has never grown into a man.

Finally, what I find hilarious is that Anton continually wonders how he stacks up against The Dandy Warhols (even though he makes it clear he thinks they and Courtney are a joke compared to his band), and even at shows he claims they’ll get “the biggest record deal of all time”, yet he says it’s not about being for sale (like he says the Beatles were). Then later on he invokes The White Stripes’ name, basically laying claim to how he paved the way for them to come on the scene, which I found to be in highly poor taste, beyond poor taste – it’s downright ignorant and obnoxious.  He continually slams new bands for not telling people who influenced them, and yet through the entire documentary I never once hear him talk positively about an influence of his from the 1960s (a decade he so shamelessly riffs on and copies).

All in all, I give this documentary a 3 out of 5. It’s fairly well made, but even though I have a lot of opinions on Anton, I feel there was a heavy degree of negative tone when showing the BJM on screen; I can’t imagine there weren’t at least some good times for the band to enjoy. I also find having Courtney Taylor do the voice-over narration for this documentary was a little strange.  It sort of put things in an immediate perspective of “Okay- we’re going to see more of the plight from The Dandy Warhols side”, which kicks things off assuming most of the drama will come from Anton and The Brian Jonestown Massacre (of course it did, that just isn’t the point).

While those aspects do feel as if they slant things in favour of The Dandy Warhols’ perspective, and I don’t particularly like how it makes things come off at times, the documentary still does a good job of simply showing things as they are, just like they happen, have surely happened before – and they will absolutely happen again.
The best thing about this documentary is how it portrays the bands; we can clearly see The Dandy Warhols changed themselves a little from where they started.  This is possibly [or – most likely – knowing our society and the way popular culture/music works] why they’ve received more mainstream attention, as opposed to BJM. Although I don’t agree with the conformity stance many have on Anton [as in he’s some sort of rebel breaking the rules and mould of modern music – because sorry to break it to you – he just isn’t], The Brian Jonestown Massacre is unique, and definitely haven’t tailored themselves towards being marketable.  Even the rest of the band seems perfectly happy with letting their ‘leader’ terrorize them for the chance at enjoying some moderate level of success; this is probably [again – most likely] why they will never reach the mainstream in the way Courtney did with The Dandy Warhols.
I recommend watching this film, and I dare you to still like Anton at the end. I have never disliked somebody more while watching a documentary, and I have watched a ton of them on serial killers, so.. you be the judge.  However, this is still a film, it is a documentary.  As a film, I can give it 3 out of 5 stars confidently.  It’s a good documentary – you seriously should take the time to watch.  If only for the sake of understanding what the idea of fame can do to people.  Even those who claim it isn’t what they’re seeking it – they are.  They just do it in different ways [eg. how Anton misguidedly does in his own maniacal way].
Decent film about some highly jaded yet relentless musicians, but it leaves me with more questions than any kind of answers as far as who these people are as human beings.  All I saw here were plastic figures dancing to the tune of their own narcissistic behaviour.