Erik Sparrow, played by writer and director Onur Tukel, seems to have a stable life – he has a nice job, he lives in a decent place in a good city, and he’s also got the love of a good woman. However, Erik is also very unaware of how much of an idiot he really is, and takes everything in his whole life for granted. Especially Jody (Anna Margaret Hollyman). She proposes to Erik, but he opts not to say ‘yes’. This turns into an awkward night where they run into an old male friend of Jody, named Jason, and Erik really makes an ass out of himself. She goes off with Jason and Erik is left alone. He goes out and tries to find someone else, but unfortunately for Erik nobody wants anyone remotely like him – he is arrogant, ignorant, pessimistic, and is terrible at having sex. All this changes after one fateful night when Erik ends up meeting a vampire who, of course, turns him into one with a bite. After this encounter Erik suddenly becomes a very different man: he is cool and sort of interesting, optimistic, and he can have sex for hours and hours on end. Although these new changes in his life provide lots of excitement, Erik still needs to feed. Hilarity and horror ensue. 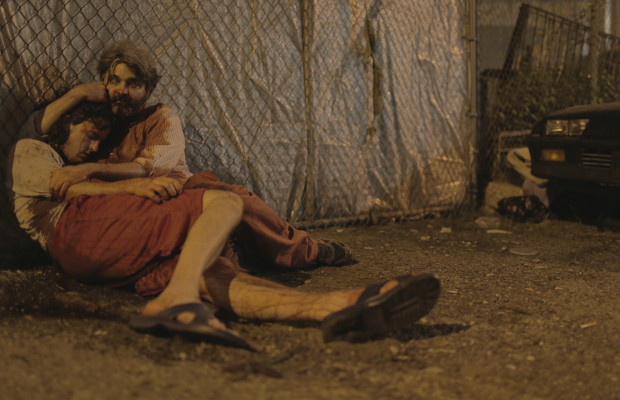 While I did think there’s a lot of refreshing and genuinely hilarious stuff going on in Summer of Blood, I almost couldn’t overcome my dislike for the character of Erik. I know he isn’t mean to be likable. Part of the whole plot is wrapped up in the fact Erik is a really despicable sort of dude. I like plenty of characters who are meant to be jerks, but there’s something about this guy I really didn’t enjoy. Whatsoever. There are a lot of wonderful comedic moments in this film. Because of Erik, though, they didn’t come off as well as they possible might have had the character been better. 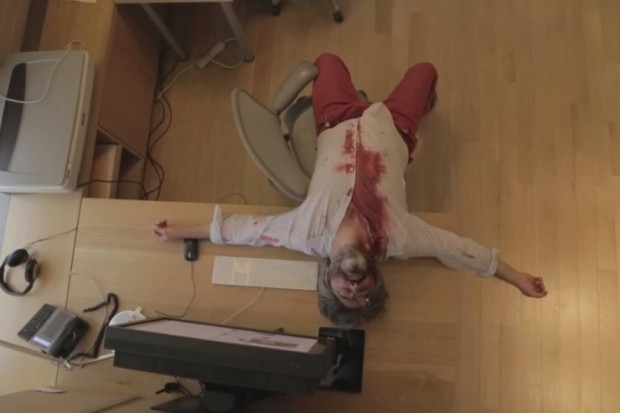 My biggest problem is evident near the beginning in one of the first scenes – Erik encounters a man with a bad neck wound (whom we’re lead to assume later was a victim of a vampire also), and basically watches him bleed out forever instead of actually getting help, or trying to get help. Now – part of this scene is meant to be funny, and it is – I just think it went too far. I wasn’t offended – nothing offends me. I believe this is simply bad writing. It was funny at first, and grim, but it is far too unbelievable. This Erik character is a real douchebag. Regardless, no one, except for psychopaths, would let a man bleed out in the alleyway so ignorantly.

Yes, the character of Erik is ignorant, but this ignorance plays out much better in other scenes than it did with this moment. It only continues on throughout because Erik time and time again proves how unlikable he is, I just think there’s a big suspension of disbelief required to get into this guy. Obviously we suspend disbelief to get into a story about vampires – this much is clear. Not everything is meant to require such a suspension. I’m willing to go real far for horror, and especially horror comedies, I just don’t think this is a particularly well-written film.

That brings me to my next point – the film wobbles all over the place a little too much for my taste. I really love genre-bending films.  Summer of Blood is just a bit misguided. After the finale of the film, I found myself a little disappointed. While I was truly digging this movie’s take on vampirism, and how they really took a fresh look at an extremely tired subject (we all know vampire films are played out), the ending really felt like Tukel didn’t know where to really go with the whole subject. I feel like there’s a certain amount of satire aimed towards the vampire sub-genre, but at the same time there’s not enough to really ‘say anything’. Not that I’m looking for a profound statement, I just felt as if the whole film was going somewhere, and along the way Tukel sort of lost the map. There were really great bits and pieces. As a whole, though, the script feels like a hugely disjointed work of horror-comedy.

I think this film is about a 2.5 out of 5 stars. It wasn’t amazing, but also nowhere near being the worst. I really respect Onur Tukel for trying to do something different with vampires, as opposed to trying to really mess with vampirism itself (there are far too many films out there trying to force in twists to fundamentally change vampires). That being said, my respect for his attempts at innovation don’t make this a real great film or anything. It’s a mediocre indie. Though, I did laugh at a few bits fairly hard. There are a nice couple gory moments, as well, and I really enjoyed those scenes. I’ve seen some others say this movie is a “mess of ideas” which come together – I respectfully disagree. I did enjoy portions of the film, but mostly, as I mentioned, things seemed out of place, messy, and it made the finished product feel sloppy. A good effort on the whole. Just not something I’m likely to ever watch again.