UPDATE: I received a wonderful message via Twitter from Leslie Jones. After you’ve read this post, please go see the follow-up. 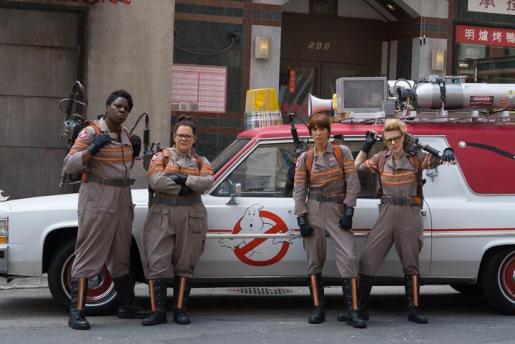 I’d like to take a time out from my regular format. Usually it’s film, film, film reviews.
But something happened this evening on Twitter, it really pissed me off. To no end. Now, I gave up social media until the middle of last year, I’d given it up almost 2 years. Reason being because I’m an emotional, invested man. Though I am sensible, I tend to let things just hound me until they run me ragged. Often it’s mainly for a good cause – these things latch onto me mostly due to people being ignorant, the hateful things you can see over the internet and how nobody seems to want to just be friends, be friendly, to talk and discuss and even debate things in a sensible and friendly manner.

Today, however, something different went down.

I consider myself a happy supporter of equal rights. I’ve always been that way because my parents raised me to be respectful of others, the differences between us, and all that. So naturally, when the new Ghostbusters film directed by Paul Feig was announced, and the cast happened to be all female, I thought it was great. Not to mention the fact Kate McKinnon, Leslie Jones, Melissa McCarthy, and Kristen Wiig were then announced as the actual Ghostbusters themselves. I love all these ladies, especially McKinnon and Wiig. Recently I caught Leslie Jones’ stand-up show on Netflix, Problem Child, and it was downright fucking hilarious; she has tons of charisma, she’s funny, and has a lot of presence onstage. Then I went back to watch some SNL bits I missed, or didn’t pay enough attention to originally, and realized not only was Leslie Jones great at stand-up, she is even better with improv and live comedy.
Then came all the backlash. Continually, all you see now are fanboys whining and crying about their latest franchises being ruined. Worst part is half of the time they’re not even waiting for a trailer, barely even pictures from the set, yet still they trash it and try to blast their biased opinions all over the internet. And sure, we all have the right to an opinion, just some opinions aren’t worth shit when it comes down to the bottom line.
With the new Ghostbusters, it’s a little different. When I said fanboys are ruining things on the internet before films are even out with a trailer, film critic Scott Weinberg made the intelligent point of noting these aren’t fanboys – these people don’t like women. 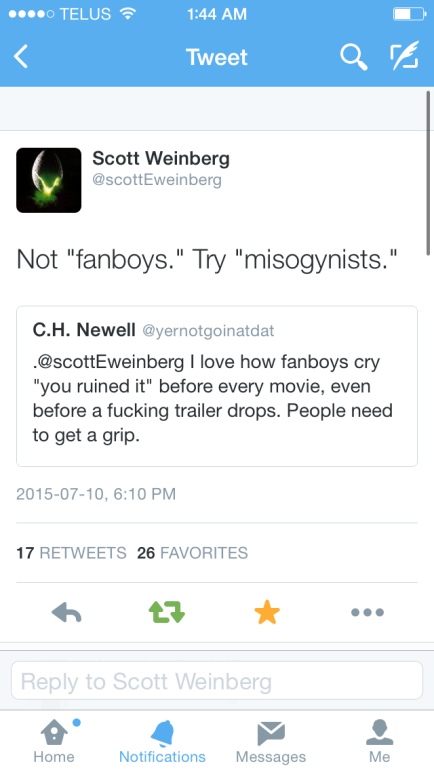 And he’s right.
He made another point on his Twitter feed around the same time, or afterwards, and basically said if you don’t know anything about a film other than a cast is female and you still hate it then there may be important questions you need to ask yourself. Or rather, they probably know.
Some men just don’t want to accept the fact they’re misogynists, or they know and they don’t care what anyone else thinks of that.
Make no mistake – the people out ragging on this movie, making extremely bold and idiotic statements such as the preemptive “this movie will bomb trust me” and other foolishness, these people are misogynistic and they are the same types of people who fall in with Disney douchebag Michael Eisner with his assertion that there aren’t many funny, good-looking women.
It just doesn’t matter – if you’re talking about being funny, or acting, or whatever – if someone is a woman or not.
If you can’t relate to films or enjoy them just because the characters in them are female, then you have problems. Yes, that’s right, you’ve got problems, and you need to reevaluate your way of thinking because that’s total madness.

However, I digress. To the point.
I was on Twitter earlier today, and I was reading all the hatefulness users were tweeting out to/about the cast of the new Ghostbusters movie. I nearly boiled over with anger, most of it was absolute stupidity. That didn’t surprise, but as I said – I’m a little emotional, even if it’s only Twitter.
So I decided to tweet out a little support. Only a pebble in the digital sea, but whatever. I’ve had contact with people like Justin Benson & Aaron Moorehead (directors of the fantastic horror-romance Spring), and even director William Friedkin who graciously followed my account/retweeted a retrospective review I did on his movie The Hunted. So I figured, why not? Even if no one involved with the movie sees it, who cares? I just wanted to put my positive two cents in and be a supporter. I couldn’t wait to see these ladies in action as the Ghostbusters team! Plus, Paul Feig created Freaks and Geeks, so I’m always up to see what he’s doing.
To my surprise, Leslie Jones saw what I’d tweeted. In fact, she saw it, and hated it, and proceeded to insult me (insinuating I do nothing except probably flip burgers), then block me on Twitter.
What did I say? Well, why don’t you have a read, along with Leslie’s “appropriate” response.

Notice, if you actually take the time to read unlike Ms. Jones, that I was supportive. What I essentially said (if you can’t read it for some unknown reason – just like Ms. Jones) is that I think they’re hilarious, all four of them – and notice I didn’t even say funny women? I said funny people. Because I don’t care if you’re a woman, I don’t care if you’re a man, or transgendered, I don’t care if you’re old, or young – if you’re funny, you are a funny person.
So, I got other tweets back saying “give her a break – she’s seeing a lot of negative things lately”, and I understand that. Totally, I get she and the other ladies cast in Ghostbusters are seeing a wave of negativity from the internet. However, there are plenty of positive people.
And furthermore, is really that confusing what I said? If I said, “Kristen Wii is not funny. Melissa McCarthy is not funny. Neither are Leslie Jones or Kate McKinnon. Whatever the fuck ever” then I could understand her thinking I was being negative; it would be obvious. But it’s painfully clear what I was saying is in no way bashing them. Yet Ms. Jones proceeds to not just block me – her “Order up” implies that I’m just doing nothing except working at a fast food joint or something (because I guess they aren’t real jobs? Hmmm maybe tell that to the people who serve you next time you’re out for a burger…). Regardless, I’m at the tail end of my B.A.H, currently getting ready to write an Honours Thesis essay in the winter, as well as writing a novel, and also editing the novel of a well-known Canadian author Earl Pilgrim. So, yeah, Leslie Jones – I’m not doing ANYTHING worthwhile over here.

In the end, I just want to thank Ms. Jones.
Thanks for making me not want to watch Ghostbusters. Not because its cast is all female – I don’t want to see it now because you were rude, as well as ignorant, you were presumptuous about my life and who I am because you thought I was being negative when I was trying to dispel the idea you aren’t funny by saying YOU ARE INDEED HILARIOUS, and you jumped the gun, treating me like some asshole who is hateful. I don’t get on the internet and spew hatred. Despite all the reviews I do and the time I spend online, I have a life – a great one. I’m a film lover/reviewer, a writer, an editor, and I’m also a proud man who doesn’t take shit from people when I don’t deserve it.
So I’m not trying to shame anybody here, but I’m pissed off.
I know it’s not like Leslie Jones will see this, nor do I really intend her to either. But I had to get this off my chest.

There’s tons of negativity on the internet, but why don’t we all take the time to read? Don’t get hot under the collar without reading something carefully, make sure you know what it’s saying and what you’re meant to get out of it – don’t jump all over people immediately without understanding what it is they are saying to you.
Because Leslie Jones lost a fan today, and I couldn’t be bothered to ever watch anything she’s in again. Too bad – super funny, lots of talent. Hopefully she won’t drive too many people away like this, I’m sure she won’t. In the long run I make no difference as an individual. I just think it’s sad and disappointing to see someone whose talent you admire act like a complete knobhead.
Not to mention, I was trying to support the idea of the female version of this film. I could care less about their being female, but if people are trying to act like that’s the only reason this movie will do bad then this movie needs support from all the fans out there! I don’t expect a medal, but I don’t expect to be treated like some idiot who is out trolling on the internet about a female remake of an older movie. I don’t expect to be insulted by anybody for not “doing anything with my life” when that person doesn’t even know me, and I wasn’t even trying to bash on anybody. I mean – do I need to keep repeating that part?
Ghostbusters will, no doubt, make a great profit. Even if people don’t think it now, it will, and most of the naysayers will still go to the theatres just to see it – regardless if they like it – and contribute to its success.
But, even if I am just one dude, they’ll have to make their money without me. I don’t care if it gets the best reviews and it breaks box-office records, or any of that, because one actor’s nonsense can really sour things. I couldn’t care any less now who hates this and who doesn’t – fuck the Ghostbusters.