The beginning of “Coquilles” finds Will Graham (Hugh Dancy) further falling into his own head. Police officers come across Will sleepwalking, in just a t-shirt and boxer shorts, alone in the middle of the highway. Only, he’s not really alone. One of his dogs is with him, but also lurking at the peripherals of his mind walks the Nightmare Stag. It gets closer and closer now, literally brushing up against him; the stag rubs its snout into Will’s arms, as if in comfort, not in any way dangerous or threatening.
So it’s easy to see how Will is completely falling apart at the seams, coming undone in every way. Sadly, though, he can’t see it whatsoever.

“You said Jack sees me as fine China he used for special guests… beginning to feel more like an old mug.“

What I enjoy about the beginning of this episode so much is after Will comes home, police in tow, after his sleepwalking incident, he goes to the home of Dr. Hannibal Lecter (Mads Mikkelsen). What truly interests me is how Hannibal is subtly, slightly turning Will away from Jack Crawford (Laurence Fishburne).
We can already see how Hannibal is not just trying to push Will away from Jack – he is trying to make himself the only lifeline Will has while he’s wading further and further into the dark seas of his mind, recreating the thinking of killers at all the crime scenes to which Jack drags him around. This plays out further as the episodes go by, but this is the first episode of Season 1 where we really see this beginning to play out in front of our eyes. With all the trouble Graham experiences in this episode particularly, we can see the beginning of Hannibal’s curiosity become heightened. He sees Will is having major trouble letting go of what he did to Garret Jacob Hobbs, he can see Will has trouble with the killing by hand, yet Hannibal loves the social/psychological experimentation on living people. This will only get worse from here. 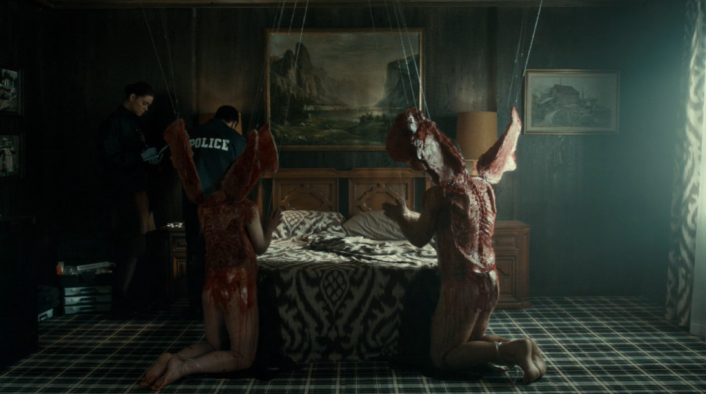 We’re also seeing bits and pieces of Hannibal’s deepening relationship with Jack Crawford. Now, there’s also Bella (Gina Torres), Jack’s wife, who becomes a part of the twisted relationship. In these scenes between the three, what we’re actually seeing is how Hannibal works his way into the lives of others. This is how he normalizes himself to other people.
Awesome how Bryan Fuller and Co. have brought in the Blood Eagle imagery.
For those who aren’t clear, this is something straight out of Silence of the Lambs. Especially iconic in the film, Hannibal Lecter leaves one of the guards on duty watching him hung up like many of the victims in this episode. Now I know the show hadn’t secured rights to Silence of the Lambs, that’s why we haven’t been able to see any Clarice Starling even up to the 3rd season currently.
So I do enjoy they’ve been able to take little pieces from the film that aren’t exactly copyrighted material, and incorporate those things into the series. Here, the Blood Eagle shows up in an entire episode, several times.
Furthermore, though, I like the villain this week because his crimes do not only speak to the relationship happening between Hannibal and Will, there is also a good deal of relation of the crimes/killer to the relationship and issues of Jack Crawford and his wife Bella.
Here we see Bella’s sick. Jack wishes he could fix her, just as he is able to fix crime and bring justice to victims. Though, he cannot fix a grave illness such as that plaguing Bella. This relates to the killer, who has his own delusions, his own sickness – he cannot be saved, exactly as Jack fears is the same for his wife.
We’re already seeing the influence of Hannibal on Will concerning Jack.
As soon as Hannibal leaks the idea into Will’s brain that Jack is using him, like how somebody picks up a tool and uses it to their gain, despite concern for the tool itself – Will it break? Can it stand the force exerted upon it? – Graham is kicking back against the work. Though, right afterwards he’s talking to Beverly at the lab and knows he was out of line. However we can see the blur of the lines between what Will knows/what Hannibal is planting in his mind. It’s one of the things that comes out more often as we progress through the series. At this current point in Season 3, Will and Jack are still in a sense on slippery ground with one another. So I like how already, even in the fifth episode of the first season, Will and Jack are standing on a treacherous foundation, building their friendship upon it, and neither of them (mostly due to the Hannibal) are able to see where things could possibly head from here.

The signs of Will’s disassociation with reality are rampant in this episode. Starting from the beginning when he’s been sleepwalking himself out into the middle of the highway, feeling that presence of the Nightmare Stag lurking, by the time we’re three-quarters through “Coquilles”, Will is standing out on the awning of front porch, window open and dogs inside barking for him; he clearly doesn’t know how he even got there.
Why I think Bryan Fuller & Co do a fantastic job is because there’s only so much about Will Graham in the novel Red Dragon; a good deal of his psychology takes place in the past, which is only flashed back to at moments throughout. Here, with the series, Fuller and the writers are able to show us more of Graham. He has always been most interesting to me anyways in the Harris novel world – no offence to Clarice Starling or Mason/Margot Verger, all of whom I find amazingly intriguing in their own right – so I love that we’re seeing so much of him come out here. We get to see how insane Hannibal and the whole Chesapeake Ripper case + other FBI cases, eventually lead him to be. He goes from a guy who has issues as it is, to a man who experiences both full-on medical and psychological problems and becomes a tortured, twisted soul, almost as much as the killers he tries to help catch. Amazing writing, in my opinion. Brings an already vibrant character to fuller life in a TV series

Even in one episode there’s so much distance from where Will starts to where he ends, it’s fascinating.
As the episode goes by and the Blood Eagle reappears, we reach the point where Will and Jack walk into a barn where the killer’s last victim was himself: he is strung up across the rafters, his Blood Eagle wings spread out behind him, as if he were soaring up through the roof.

“It’s getting harder and harder to make myself look“

Although Jack cares so much about people, even seems to care about Graham, he still pushes Will further and further. He excuses the trouble of Will’s mind by saying that things would be worse if Will weren’t making himself look at these things. It strikes me as a good juxtaposition in this episode, seeing how Jack comes around to his wife’s suffering and there’s still resistance for him to accept the suffering of Will.
I dig the end of the episode where Will shows his friendship for Jack, sitting with him in the office and stating that Jack doesn’t need to talk, but Will claims he won’t be leaving until he does. Then they sit there as the episode finishes, two friends in a rocky relationship, yet friends they are indeed.
Overall, “Coquilles” is a solid episode. There is a ton going on, and once again the Serial Killer of the Week format proves it is not just another procedural crime show about FBI, forensics, and so on – it uses the format to delve further into the psychologies, relationships, and actions of all the lead characters. Specifically, we see a lot about Hannibal, Will, and Jack as well this week. Helps us go deeper into the characters and understand more about their fears, their motivations, and how they all react to the different stresses under which they’re being crushed.
I can’t forget to mention the awesome often dark comedy we get from the relief of the FBI Forensic Unit, played by the wonderful Scott Thompson from Kids in the Hall, Aaron Abrams, and Hettienne Park of whom I’m a big fan due to her turn on this show. So, if I don’t mention them enough it’s only because the dark drama of the show, the blood, the aesthetics all lure me in and it slips my mind! They’re a great addition to the series.