Now with this episode we take a little stutter step back to the girl with the terrible mental illness, Georgia Madchen (Elen Muth), which made her attack and murder people via Glasgow Smile. At least until Will Graham (Hugh Dancy) was able to reach out to her, underneath his own bed, and assure her that she is alive.
Georgia is starting to recover. They’ve got her in some sort of incubation chamber, an oxygenated tank. For one of the first times in a long time, Will actually has a smile on his face. Though, he’s still sick with a fever.
Between Georgia and Will we really see Graham’s worry about going crazy. Georgia says “I don’t wanna remember” because she tells him that the worst part of getting better is remembering what she did.

Then we, beautifully, come to focus in on Hannibal Lecter (Mads Mikkelsen) at the edge of Will’s hospital bed. He’s brought Will chicken soup. Although it’s quite a bit more fancy than that. The two of them eat together and talk about Will’s oncoming madness. Certainly there’s the fact Hannibal is deliberately steering Will away from the truth. Even Will is curious for a moment why Hannibal hasn’t told Jack Crawford (Laurence Fishburne) that Will may have anything more than a fever, though, the naughty doctor assuages him by saying there’s no point in alerting anyone until they’re sure what is wrong.
Following their conversation, poor Georgia finds a small plastic comb in her tank all of a sudden. Tsk, tsk. Naughty Hannibal. When Will told him that Georgia doesn’t really want ‘recovery’, in psychological terms, perhaps the doctor took this quite too literally. Of course, no matter the why of the situation, Hannibal is merely covering his tracks now that the girl is better. 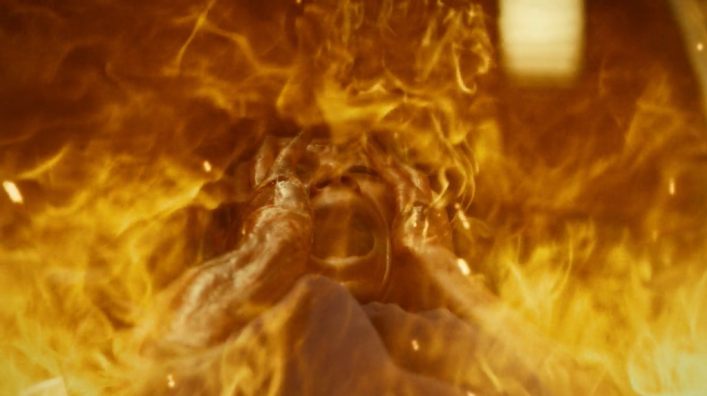 Freddie Lounds (Lara Jean Chorostecki) is circling like a death-eater around Abigail Hobbs (Kacey Rohl). She’s ready to hawk her book, the chapter headings all prepared, and digs into Abigail. Freddie wants to know who really killed Nicholas Boyle (Mark Rendall). There appears to be a cunning edge to Freddie, even though she’s truly a dismal personality – I mean in terms of the character, she is a terrible person. I love Chorostecki and this incarnation of Lounds, very great adaptation from the Thomas Harris bits in Red Dragon.

In a dream, Will sees Georgia – the oft-repeated final words of Garret Jacob Hobbs (Vladimir Jon Cubrt) coming out of her mouth. In the dream she is sick again, her face hideously rotten again with dying flesh. Then, out of nowhere, the antlers impale through her chest and lift her slightly. She’s engulfed by fire, then the Nightmare Stag shakes its antlers, everything burning up. Amazing visuals.
The Nightmare Stag is such a great recurring image. Along with those words “See? See?“, that will come up over and over throughout the series.
There’s a really good scene between Bedelia Du Maurier (Gillian Anderson) and Jack Crawford. We’re getting to see behind the curtain of Bedelia’s relationship with Hannibal Lecter. Even if it’s only a slight glance. Jack thinks he is withholding information, even going so far as to state he doesn’t believe Lecter is dangerous. Mostly, Jack asks Bedelia about the attack Bedelia experienced at the hands of a former patient referred to her from Dr. Lecter. Apparently, he swallowed his tongue while attacking her (if you want real spoilers: see here for Season 3 Episode 10 where the true events of this are revealed).
This leads into a conversation about the “strange relationships” Hannibal has had with his patients. There’s a further conversation later between Hannibal and Bedelia. We get a lot of subtle bits about Hannibal, what he might’ve done in terms of the patient who attacked Bedelia – was it another case of Dr. Lecter experimenting to see how a situation might cause both the patient and Bedelia might react? One of those sick social experiments of his.

Jack indulges Will slightly, of course not by telling him, but through using Jimmy Price (Scott Thompson) and Brian Zeller (Aaron Abrams) to start trying to figure out how Garret Jacob Hobbs and the supposed copycat were connected using traditional FBI methods instead of simply going with Graham’s theories off the top. Fun bit between Crawford and the FBI Forensic guys, especially when Jack verbally throws his face in palm by simply asking where Beverly Katz (Hettienne Park) is other than the lab.

In this episode, Will unfortunately reveals too much to Hannibal because the bad doctor starts to head off his supposed friend. Graham tells him how he has uncovered the evidence, he will reconstruct the copycat’s thinking, and now Hannibal knows that it’s only a matter of time before Will discovers, for sure, that the copycat is the Chesapeake Ripper. And how far more does Will have to go before he deduces that Dr. Hannibal Lecter, his burgeoning best friend, is the true identity of the Ripper?
Hannibal understands how smart Will is, even if he’s dealing with a rough touch of encephalitis. He knows it wouldn’t be long before Will comes to understand it all. Instead of stopping anything, Hannibal lets Will take off with Abigail. Will is taking her back home, to her father’s old stomping ground. At the same time, Jack Crawford is still a bit pissed with Hannibal, believing him to be holding back information.
Then, Hannibal plays back a recording of Will from one of their earlier sessions where he said he’d felt like he killed Marissa Schurr. This sets up the events that will come to pass in the rest of the episode, the following one, and then extending into Season 2. Hannibal, the Great Manipulator, begins to extend his reach, gripping his fingers around Jack, Will, Abigail, and everyone else nearby.
Will disassociates, ending up back on the plane home. Except Abigail is no longer with him. The last he remembers, he was confronting Abigail in the antler room back at the Hobbs cabin. Abigail revealed to him that she was the lure for her father’s crimes. Will imagined himself killing her, impaling her on the wall of antlers. Everything comes out, which pushes Will’s encephalitis to make him black out, lose time. He’s sweating, shaking, he doesn’t know where he is any more.
This, of course, works wonders for the plans of Hannibal Lecter— his dark and devious manipulations. 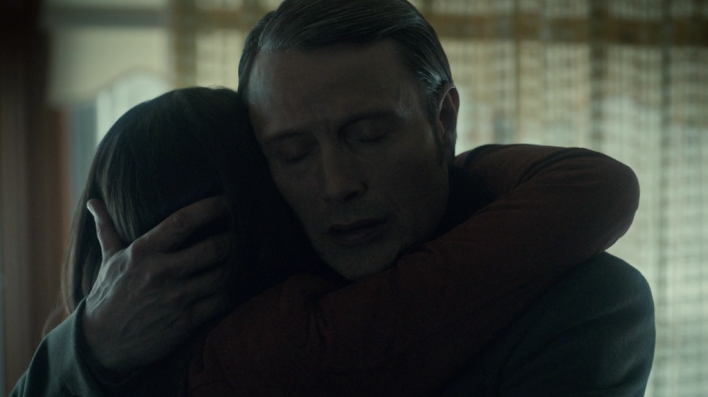 Back at the Hobbs house, Hannibal meets Abigail. She ditched Will at the cabin. Now Hannibal has a plan, though, it is not exactly what Abigail had hoped, or the viewers either. At this point, it looks as if her days are numbered.Hannibal reveals himself completely to Abigail, about who he is, and what – a brutal serial killer. He tells Abigail he did it all, called her father that fateful day, because he was curious about what would happen. Essentially, this is why he does anything when it comes to other humans, he’s curious about their behaviour because Hannibal is not quite human, not quite Other. Then, we’re treated to quite a tense few moments, the final few seconds of the episode. Another excellent and revelatory episode, which is great considering this is the penultimate episode of Season 1.
So with that, we’re moving into the finale titled “Savoureux” directed by an excellent series regular, David Slade, who has directed such films as 30 Days of Night, Hard Candy, and others. The finale is just incredible, completely devilish and disturbing. Stay tuned, Fannibals!