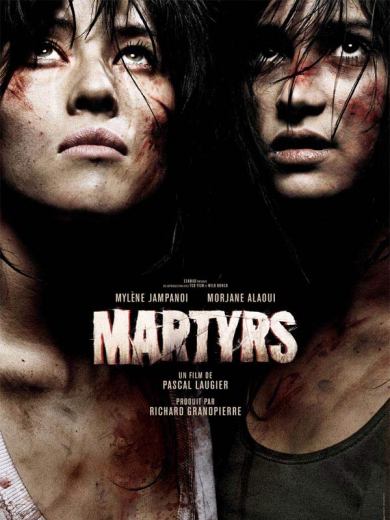 Martyrs is most definitely a bloody, gory, savage film from beginning to end. Of course those bits alternate, as well as the fact Pascal Laugier builds up tension very nicely at so many points. But there’s no doubt about the savagery contained within this horror movie.
There have been many gory movies in the history of horror film. From Herschell Gordon Lewis’s Blood Feast and Wizard of Gore, among others, to stuff like Saw, then classic horror such as many of Fulci’s films and Dead Alive from Peter Jackson. So there are many ways in which gore can play a part in a horror movie. It can either be so-called “torture porn” (those who’ve read my reviews before know my stance on this dumb label; I only use it for ease), or it can serve a purpose of some sort. What I’m saying is that gore need not be useless, just some element thrown in to make a horror more scary, more effective. It can be used as a means to an end, rather than an end in and of itself.

To me, Martyrs is one of those films with all the blood and gore to satisfy even the most desensitized horror hounds, but even further it has heart, character, and a ton of interesting, complex story to boot. Laugier has a masterpiece of horror here and I think that the writing helps to elevate this from simply another gore picture, to a profound horror which leaves its visceral, bloody mark on the viewer long after the credits stop rolling.

The movie starts with a quick scene of a young Lucie running in a tanktop and underwear down the street, screaming for help. She’s brought to an orphanage where she comes to bond with a girl named Anna.
Years later, grown up Lucie (Mylène Jampanoï) goes back to the little house from which she’d escaped years earlier, running away bloodied and in a frenzy, then kills the mother, father, and the kids inside. Calling Anna (Morjana Alaoui), the two women then begin to try and pick up the pieces. Only Lucie seems to be having trouble with something inside the house. After the unthinkable happens, Anna is left to try and figure out how to proceed from then on. Only, the house hides more secrets, things Anna couldn’t possibly anticipate. As she goes down into the basement, discovering what amounts to a whole complex underneath its foundation, things are revealed which will shake her world and her beliefs forever.

Watching this again for the dozenth time or so now, I forgot how awesome the music was during the moments with the ‘thing’, as it first encounters Lucie (Mylène Jampanoï). It has this almost heavy metal, ominous, pounding rhythm. Very intense. Then the rest of the film there’s also more nicely composed score. Alex & Willie Cortés do the music in this film. They also did music for an interesting independent film called Eden Log, also worth checking out. This was the first time I’d noticed any of their work, and other than the aforementioned film I haven’t seen anything else with which they’ve been involved. Doesn’t matter; their work here speaks for itself. I thought it worked well with so many of the tense scenes. A good bit of music helps to increase the mood, which Laugier helps set through dreary atmosphere and even a bit of the unexpected in there, too.

For the first half an hour when I saw Martyrs initially, I had no real clue what was going on. While I knew roughly that something obviously happened between Lucie and the family she slaughters, when the ‘thing’, the terrifying and hideous woman first showed up I couldn’t figure out what the hell was beginning to come out.
We get bits and pieces, slowly, then finally the plot starts to filter out. This is ultimately the greatest part about the film. Laugier puts the gore together with an innovative, refreshing story, and this makes the entire gorefest so much more worth it for the thoughtfulness on Laugier’s part.
And in the meantime, the gore and the effects are incredible! The first woman, the ‘thing’, looks out of this world. As if her outer layer of skin had literally been peeled off. I mean, kudos for that. Then comes the woman whom Anna later finds in the basement; when she’s trying to take the metal blinder thing off the woman’s skull, it actually made me cringe once or twice. I’ve seen a ton and that still got to me. Gnarly!
Perfect work in terms of special makeup effects. I have to mention Benoît Lestang – other work includes: The City of Lost Children, Brotherhood of the Wolf, and Amen. Then there’s also Adrien Morot whose credits range from Alejandro González Iñárritu’s upcoming film The Revenant, to Noah, X-Men: Days of Future Past, to smaller work on indies like Rhymes for Young Ghouls and Canadian television series Durham County starring Hugh Dillon. In Martyrs, these two artists come together to make some truly effective, disturbing, and nasty work. Wonderfully macabre business!

I don’t think there’s any possible way two actresses other than Morjana Alaoui and Mylène Jampanoï who could’ve done a better job with these two characters. There’s a true, evident connection between the two women. Even though there’s not a particularly massive amount of character development, nor do we get to know either of the women overly well, the deepened relationship between Anna and Lucie is clear, as they’re both there for one another. Particularly the fact Anna obviously loves Lucie, maybe more than just a friend. Yet either way, she did so much for Lucie, to try and help her get past whatever it was that happened to her as a young girl in that awful house. So with a small amount of time, Laugier is able to setup a perfectly believable and emotional relationship between the two women while not having to focus too directly on any expository dialogue, or even flashbacks of any sort.

This leads to another aspect I loved – the backstory for what is going on in the house. There’s so much more going on than I’d ever imagined from the start of the story. Once things kick in, as Anna is left behind following Lucie’s tragic death, they really take hold of the jugular.
After a while, the story comes out that these people were a part of some larger, obviously heavily funded, operation in which people were essentially being groomed into martyrdom. This is martyr in the sense of being “witness”, or bearing witness; in this film, it is bearing witness to what lies beyond death in the afterlife. Like a sick type of experiment – well, not like, that’s exactly what it is: an experiment. They take humans – especially girls apparently because they’re even more resistant to the pain overall; tougher and built for martyrdom – then they subject the human body to everything, to and beyond the limits of what a person can handle. I think I found all the pictures of the previous martyrs especially chilling! First, we see them almost meaninglessly as Anna walks through the newly discovered, sterile-like environment in the basement. Then later on, it’s all explained, and the gorefest which preceded everything begins to truly mean something.
Now, whether or not you think that something is a load of crap or not, that’s another story. I thought it was twisted and depraved and perfectly suitable. In a way, it subverts our expectations of horror films that get labelled stupidly as “torture porn”. We expect this is all just sick pleasures and people getting off by torturing others. Yet the deeper Anna takes us into the house and its catacombs beneath, the chambers and labs and rooms below, there seems to be more and more to this supposed torture. I thought the script was an excellently refreshing horror on Laugier’s part and it’s nice to see something with all the earmarks of a typical gory horror, which ends up being more than a sum of bleeding and dripping parts.

There are a bunch of ways you can look at the film, if you want to dig deep into as a metaphor or analogy of some sort. Whatever way you cut it, I think there’s a lot to offer in the story of Martyrs. You can look at it as ultimately the story of what lengths some people, under the guise of “faith” will go to figure out if there is anything beyond the pale of death. You can also look at this as how society, many groups in particular, heap all the weight and harshness of the world onto women; as the villainous lady in the film says herself, women are better at taking the pain, they have a higher threshold and tolerance for it, therefore they make the perfect candidates for this imposed and supposed martyrdom. We’re able to digest Laugier’s work in any number of ways, but regardless it’s stellar. I think you can take from it what you will – at face value, or something with a little more value under the skin.

This a masterpiece of horror, as I’ve said before. Absolutely 5 stars. Pascal Laugier has an incredibly twisted eye for horror and I think he brought all this forward in Martyrs. Truly great horror movie. It has everything from an interesting backstory, well-written characters, great performances, and on top of all that there is a near non-stop gore machine pumping out the wonderfully macabre and nasty makeup effects.
If you’re a horror fan, you need to see this honestly. I think if you take the time to let the plot sink in, take the ride for the first 20 minutes to half an hour, this will really get under your skin. Plus, if you watch it on Blu ray the sound and visual quality is extraordinary. Couldn’t get enough.
There’s a good deal of interesting work here that doesn’t often come along in horror anymore. One of the best modern horrors I’ve seen. Period.