NBC’s Hannibal
Season 3, Episode 13: “The Wrath of the Lamb”
Directed by Michael Rymer (Queen of the Damned)
Written by Nick Antosca/Bryan Fuller/Steve Lightfoot

* For a review of the previous episode, “The Number of the Beast is 666” – click here

DISCLAIMER: THIS IS HUGELY SPOILER FILLED! DO NOT READ ON IF YOU’D RATHER NOT HAVE THE FINALE SPOILED. MANY SPOILERS WITHIN!

We start this Season 3 finale where last we left off.
Francis Dolarhyde (Richard Armitage) has Reba McClane (Rutina Wesley) feeling awful vulnerable, very frightened. He is the Red Dragon, his actions and speech all scream of the Dragon. His ominous way of speaking to her, telling her to take the key from around his neck and advising not to run because “I can catch you,” it’s all unsettling. Yet in a highly subtle, quiet way. Dolarhyde doesn’t need to scream and rave at Reba; he makes her fear him simply in the way he conducts himself.
She feels the change in Francis before versus Francis now. He’s toying with Reba here and, as opposed to the more sympathetic serial killer in Dolarhyde before now, it’s hard to feel any bit of sympathy for him. There’s a new frighteningly mean streak in Francis. He holds the gun out telling Reba to feel it. She does, but he rasps “Don’t grab it – feel it.” As if there’s a difference. Shows how the change in him has overcome any sweetness in him that came before. The Dragon wants Reba and there’s really nothing further Francis is able to do.
The intensity to this opening scene is incredible. Watching Reba smell the gasoline, as Francis pours it out on the floor; excruciating. Her acting is incredible. I felt so awful watching that poor woman feel her fate coming, but not able to see it. There’s something so terrifying in that alone.
Also, both Armitage and Wesley are in their best form here yet. Although we’ve seen a ton from these two, especially Francis, the emotional intensity running through these moments is so palpable, it’s nearly gritting between your teeth. The tears in the eyes of Francis, the lump in his throat, as he sets things alight, it is terrifying beautiful. Armitage has done more than his share of terrific acting over his 6 episode arc and I’m so happy he was a part of Hannibal during its impressive run. 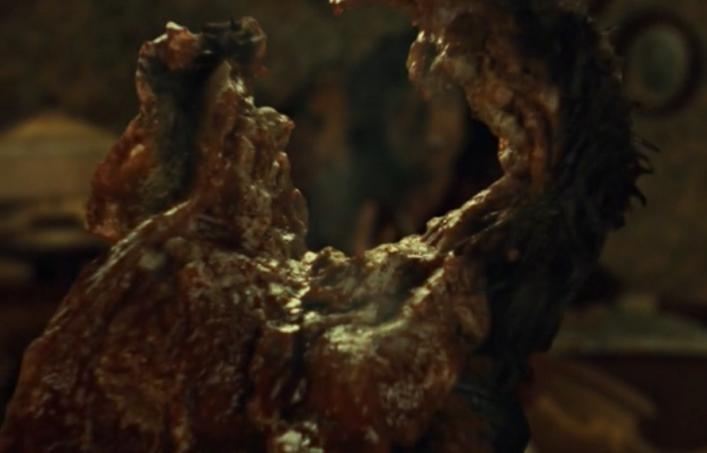 What a headshot. It looks as if Dolarhyde set the fire then killed himself, as he tells Reba: “I can’t stand to watch you burn.”
Intense. Did we see what truly happened? Or is this a visual ruse? We see what Reba hears? Maybe not. It looked full-on as if Francis Dolarhyde shotgunned himself through the back of the skull, leaving a pile of blood and meat and brain. It’s a vicious image! True gory horror, all on NBC. Impressive, man. Part of why Hannibal has been cancelled; another network and it might’ve worked better.
Will Graham (Hugh Dancy) sits with Reba. She’s worried it was her that drew out a freak. However, Graham assures her she “drew a man – with a freak on his back“. This is a great little scene between these two characters; each of them have been drawn into a tangly web by a dangerous serial killer, so to see them together is a treat. Many dualities play out for Will Graham. Perhaps because of the deadliness involved, this is the one which rings true most. Particularly at the moment, anyways. 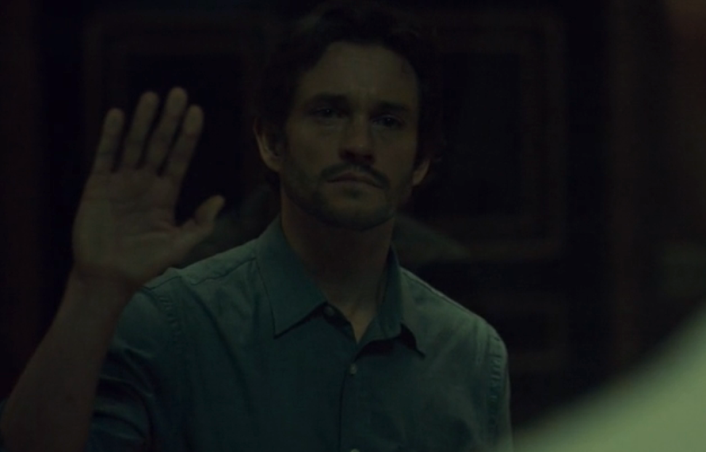 Father Gore was correct— Francis Dolarhyde did not go out like that. When Will arrives back at his motel after meeting Lecter, the Dragon is waiting for him. He attacks from behind and puts Will out. Graham comes to and they have a very interesting conversation. What’s happening now is that Will might actually get to have what he’s always wanted: to kill Hannibal. Perhaps it may come vicariously through Dolarhyde.
One thing is for sure now, as Will Graham shows up at FBI Headquarters – not dead, no broken back, not even cut up in any way or bruised – he and Dolarhyde have somehow bonded. Even if it’s in the slightest manner, there is some kind of connection over their anger towards Hannibal Lecter.
Graham convinces Jack Crawford (Laurence Fishburne) to have Lecter taken into federal custody, so they can “fake an escape.” Though, aren’t we thinking the same thing, Fannibals? Will may actually let Hannibal be killed.
Dr. Bedelia Du Maurier (Gillian Anderson), who has been on both sides of the veil with Hannibal the Cannibal, does not side herself with Graham. Because as messed up as Bedelia is herself, and she is messed up beyond belief, she clearly knows the repercussions of anything involving Lecter. There’s no chance to walk away unscathed. Bedelia calls Will pathological, and throughout their conversation she almost has tears welling on her lids.

“Who holds the devil, let them hold him well“

Still, what we’re seeing above all else is that Will Graham – for all he’s done already to this point – is finally becoming as much like his old friend Hannibal Lecter as ever. Let’s not forget his latest piece of work; at least what we can count Graham responsible for, whether intentional or not. Dr. Alana Bloom (Caroline Dhavernas) goes to see Dr. Frederick Chilton (Raúl Esparza). What a tough bastard, hey? I mean, the guy has been shot, disemboweled, framed for the crimes of the Chesapeake Ripper, now he’s recovering from burns over 100% of his body. Incredible! That’s part of why I’m glad they actually switched the ultimate fate of Freddie Lounds (Lara Jean Chorostecki) and Chilton because it just keeps on showing how resilient the man is, both mentally and certainly physically.
Afterwards, Alana goes to see Hannibal. She’s offering a bit of help, in some way. Hannibal realizes – after Alana explains Jack’s new plan of faking an escape – that Will is setting him up for death at the hands of the Red Dragon. But Bloom offers the little amenities – toilet seat, books, et cetera – in order to get Hannibal to help them; harkens back to Clarice Starling in The Silence of the Lambs.
What I’m wondering is this: how’s Hannibal playing at all this? What’s his endgame? We shall see soon enough.
I’m afraid Will may be suffering from a touch of hubris. There’s a dark, ominous feeling to everything. Jack lays it all out, as he, Will, and Alana decide they will kill Dolarhyde, then also kill Hannibal. But it makes sense, right? They’ve not been playing by the rules for a long time. Ever since Season 2, hell even Season 1, Jack Crawford’s been playing fast and loose with FBI rules. No sense in stopping now, nor should we expect it to stop. It follows suit with everything. Plus, there’s the fact that every last solitary person on the show has been touched – with full evil and malice – by the hideous hand of Dr. Hannibal Lecter, the Chesapeake Ripper.
The only problem is that Lecter has a plan in his own mind. You know he does. The man is always two steps ahead of everyone else. Incredible scene as Will sits across from Hannibal – iconic mask over his face and mouth – and the supposed escape begins. Only Francis Dolarhyde really makes a show of it all. He pops a couple silenced shots into the cop car along the front of the federal convoy, and then IT IS ON.
Beautiful, creepy music from Brian Reitzell. As I’ve mentioned before, several times, there’s this incredible electronic sound, as if coming through a vacuum, and it comes back here as Will comes to after the crash; things are blurry, the Dragon is working and Hannibal is getting loose of his binds.
There’s an amazing moment where Hannibal steps out of the wrecked van, Dolarhyde speeds away, and there’s this new moment again with a seemingly free Lecter standing with Will. Very chilling and strange and fun. There’s a gorgeous quality to the scenery and to the white jumpsuit Lecter wears. Everything combines into an oddly happy moment. Like the calm before a storm.
Great cinematography here, as always, but especially seeing as how this is pretty much – for sure – the finale of the series. I think they went all out. Nice landscape shots mixed with a tiny montage – Margot Verger (Katharine Isabelle) and her wife Alana Bloom, along with child, evacuate to make sure they are safe, Will and Hannibal drive along the coast together like two lovers eloping.
A dark scene between Will and Hannibal now sees them sharing wine together, as if in celebration. Then out of nowhere a bullet comes through the window, punching a hole out of Lecter’s guts.
In comes Francis to confront Hannibal. It’s an impressive and strange and wonderful scene. All at once. Funny because Will drinks away, as Francis and Hannibal have their confrontation. It’s beyond intense, there are no words for it. We’re finally working towards what Dolarhyde always wanted – to watch Hannibal “meld with the strength of the Dragon.” As Will seems to be preparing to jump into action, Francis stabs him RIGHT IN THE CHEEK – IN THROUGH THE MOUTH! Lifting Will and tossing him out through a window.

The most beautiful and savage scene here now comes, as Hannibal goes to Will’s aid. We’re seeing this amazingly weird love story between Will and Hannibal come to a head. Their heterosexual romance culminates in killing together. Each of them attacks Dolarhyde. Hannibal even bites out a piece of his throat. It’s the COOLEST SCENE OF THE SERIES. Finally, Hannibal and Will get to kill together, they bathe in the blood of an enemy. Not only that, Hannibal would not let his love for Will die. Nor would he watch Will die, either. “It really does look black in the moonlight”
“See? This is all I ever wanted for you, Will. For both of us.”
“It’s beautiful“ The embrace, that moment between Will and Hannibal is one of the most intense things I’ve ever seen onscreen. But the moment after is something I could NEVER have imagined. I did not expect to see it and there it went. And even further, the very end for Hannibal and Will comes in part due to two things: 1) Will cannot let Hannibal get away with all he has done, & 2) Will cannot necessarily go on with all the knowledge of what he has done in his head/heart. 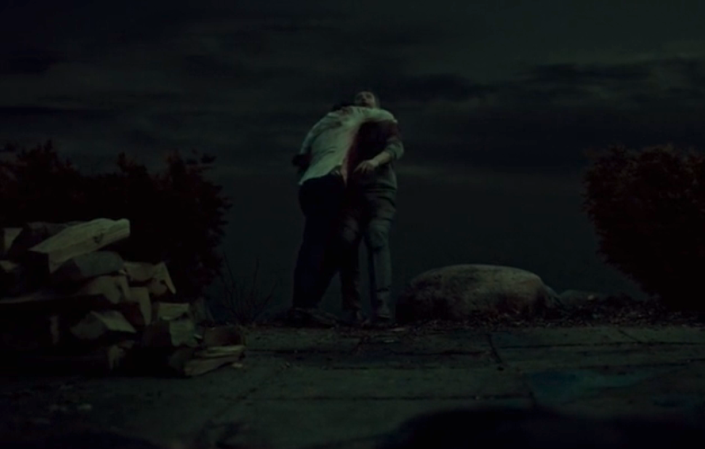 The very final shot see Bedelia at a table with a leg-like roast on the table, cooked how Hannibal made Gideon eat his own leg a while back. Has Hannibal survived? Are the murder husbands off on an adventure together? Or, did Bedelia anticipate she’d only get what was coming to her and cook her own leg? You be the judge. Most feel it’s the former, and Father Gore’s inclined to agree.

Never imagined it would end this way. What a fitting and gorgeously horrific finale.