Having recently reviewed Neil Marshall’s fabulously claustrophobic horror The Descent (which actually came out the exact same year this), I also decided on revisiting this guilty pleasure of mine. While I cannot, at all, say The Cave is a good movie, it’s not the worst I’ve seen, it’s – for me – on par with a lot of big budget popcorn flicks. And that was this is, a turn your brain off, have a snack and laugh with someone or even by yourself. Burn one down, throw this on. There are some laughable bits, absolutely. Are there some scary moments? For me, as someone who finds caves creepy, someone whose claustrophobia knows no bounds, and also as a person who loves the water/is terrified of it as well, there are definitely a handful of scenes where I found this movie really played hard on my fears.
The majority of The Cave‘s problem is the screenplay has one hell of an amazing plot and story, yet still this is squandered through bad dialogue, middle of the road acting, and effects which lack any sense of realism to help frighten us viscerally. Mostly, you could call this a creature feature, and though I find the creatures in this horror movie creepy, sort of intimidating at times, once you get more than the mysterious looks at it, hints of its size and power, the magic is lost. Regardless of its flaws – and there are a bunch – I’m still able to throw this on once every now and then, especially if I can’t think of anything else or if I know I want to turn my brain off a while to get some quasi-horror and a dose of action.

Decades previous to the film’s events, a team of explosives experts are caved in while exploring a stone church built deep in the Carpathian Mountains. Dr. Nicolai (Marcel Iures) arranges a team of scientists and cave divers to examine the ruins and the massive cave system which exists below the church itself. Two brothers, Jack (Cole Hauser) and Tyler McAllister (Eddie Cibrian), lead everyone into the caverns, travelling over its steep rock walls and its seemingly never ending pools of dark water, mapping territory no one else has ever set foot on.
Or perhaps someone has already.
Deeper and deeper into the cave system, Jack and the crew begin to discover there is in fact someone else who has been down in those caves before. Even worse than that, they never ever left. In fact, they got bigger… they got more vicious… and they adapted to a world underground, without light, in the cold, deep, dark waters.

The opening sequence is a lot of fun. Later, once the diving team are headed into the cave system there’s an excellent callback to the beginning, as we see what happened to those characters who went into the old mountain church, falling through the floor and into the murky depths of what lay below. I won’t ruin it for anyone who’s yet to see it, but I really dig that whole aspect. They could’ve easily done something different and less effective. This was a nice way to introduce the virus aspect of the creatures in the cave, all the while Cole Hauser’s character becomes a living representation of that. Although the screenplay is not solid, there are bits and pieces I do enjoy. Overall, it’s messy. I’m just glad certain sequences were written well enough that the entire film isn’t useless.
Many action moments come off decent, as well as scenes of intense horror. One part at which I always shudder: the crew are in one of the various underground lakes in the cave system, in two groups – Dr. Nicolai (Marcel Iures) is taken by one of the cave’s creatures, at which point Jack McAllister (Hauser) looks under the water only to see the monster disappearing further and further into the deep, dark waters below, fading into black. HONESTLY, this brief moment scared me as much as anything in Jaws, which is saying something because that is one film that always left an indelible mark on my psche (I love the ocean/am terrified by it). But, that being said, it’s only one scene. The rest of the movie is nowhere near up to par with Steven Spielberg’s classic. A few other creepy sequences exist in The Cave, though, nothing as wild and unsettling as this one I’ve mentioned. As far as action goes, I did like some of the rock climbing scenes; they brought intensity, as well as surprise in a few cases. So there’s enough action-adventure at times to keep you glued. Problem is, never enough to make you love the movie, or to get you past its myriad script/overall problems.

Director Bruce Hunt, by all accounts, should’ve done better. Perhaps I expect too much of a man whose career as a Second/Third Unit Director has been fairly impressive: Dark City (director – additional second unit + miniatures & visual effects director), The Matrix (second unit director), The Matrix Reloaded (third unit director: Australia), The Matrix Revolutions (third unit director), as well as Australia (director – splinter unit), and the nice looking but less than stellar Don’t Be Afraid of the Dark (second unit director – splinter unit). Sadly, none of his previous work comes to bear on this project. For a man who had a part in the effects of Dark City especially, I expected something more. Nevertheless, many of the special effects here are brutal, and it’s only when the cave monsters are relatively still that they look good. In other scenes where they’re flying around or attacking the diving team, they look terribly cheesy and underdeveloped, patched together with bad CGI. If more practical work could’ve been done, The Cave and its creatures could easily have raised above mediocre to forgettable. Instead, we’re left with not only a poor screenplay, but also too many visuals lacking the proper effectiveness a monster movie must have in order to be successful. 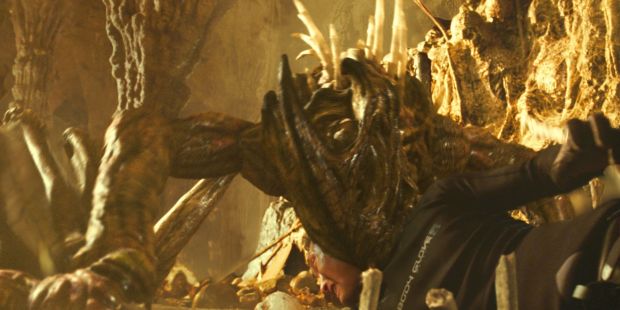 This is, at best, a 2(out of 5)-star film. The story itself is intriguing enough, as well as the film’s opening sequence and the return to it later in the plot. But an interesting plot does not a proper movie make. The acting isn’t anywhere near what it should be, considering everything else falls so flat. If there were a few better elements the film could’ve passed for half decent. Instead, it is less than mediocre and forgettable. All the same, I still watch it from time to time as a guilty pleasure.