This episode begins with Countess (Lady Gaga) explaining that “women age differently than men do,” but the kicker is, of course, as we know she’s a vampire. Here, she stares into the walled off corridor where James March (Evan Peters) had sealed Natacha (Alexandra Daddario) and Rudolph Valentino (Finn Wittrock).
Countess is convinced to build “something new” and makes it clear: “I will not be managed.” Later downstairs, she’s talking about her upcoming wedding to Will Drake (Cheyenne Jackson). She wants it small. Yet he tells her “I‘m a showman” and he wants a big wedding. Finally, she agrees that he will design the gown, she will get everything else taken care of. Then there’s Liz Taylor (Denis O’Hare), who Countess wants to arrange the flowers. Liz does not want any part of her: “Buy your own damn flowerrrrs.” And why would she want to help the Countess, after the Tristan incident. Alex Lowe (Chloë Sevigny) is still kicking around, serving drinks, to a highly disaffected Countess who only grows more and more disdainful about the world around her.

Then Countess tracks down Rudolph Valentino at a motel. While simultaneously at home, she beds Donovan (Matt Bomer) again, screaming “I forgot how good you feel inside me.” They have a nice little bit of pillow talk. He asks that it only be him for her, forever; he needs commitment. Not in the way of just being with one person, but rather he wants to be the ONLY person she loves: “I swear it. But I won‘t make the same mistakes again,” she replies. Is this all a ruse on Donovan’s part? I’m sure he didn’t just switch back to loving her, did he? I imagine Ramona Royale (Angela Bassett) is lurking along the periphery of the Countess’ life, alongside Donovan. We’ll have to wait and see. For now, Donovan and Countess seem to be making a list – of who to murder.
Nice to Iris (Kathy Bates) again. She even tells the people at the front desk the “douche bag convention” is somewhere else. Proper. A couple pornstars show up with their disgusting director. Iris tells them she’ll bring up some “extra towels.” An AMAZING voice-over sequence after this, starting off with a Blue Monday cover and Iris talking about the “Sydney Pollack” of porn and how she went to see Deep Throat back in the day. She even calls herself “Dirty Harriet,” as well as gives us a little lesson on why pornography “hurts people,” what it does to the male and female psyches. Plus, afterwards she goes into the room and starts slitting throats, stabbing chests, and generally bloodying the place up. Good gore. Out of nowhere, Donovan appears. Very impressed with his mother. “You have clearly come into your own,” he tells her. Though, she warns about problems. We slip back to the Bartholomew incident, where that creepy little baby got out to wreak some havoc with its terrifying face; Iris gave up Ramona’s name to the Countess.
However, now we’re getting a bit of the real story. Donovan is definitely in love with the Countess. At the same time, he’s still looking for revenge. Will he get it? Or will the Countess figure it all out? Has she already? You can never tell fully.
Drake explains to his son Lachlan (Lyric Angel) about how the Countess understands him, gets him, all that. Then Miss Evers (Mare Winningham) shows up talking about how the Countess will only “bleed you dry“. It’s an eerie moment. 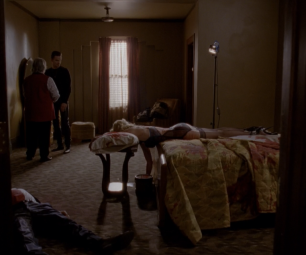 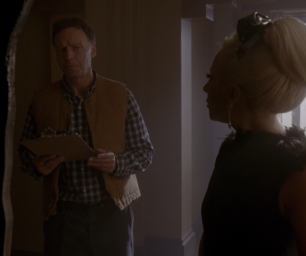 Then a flashback comes where Miss Evers talks about how she loved March. He claims that the Countess “is a creature from heaven” and tells her: “It‘s not your fault you were graced with… different gifts.” But back in the present, Will does not heed any of her warnings. Despite the fact we know the depth of the darkness into which he is about to plunge. I won’t quote her exact words because you NEED to experience them from her mouth; she lets Drake know exactly how she feels before leaving the room.
Down at the sealed, now unsealed, corridor, the Countess is trying to get a contractor to re-seal the hallway. After a bit of talk from him, March shows up to try and explain how it’ll all get done: “Make haste – much to accomplish!” Some people don’t like Evan Peters this season. Me, on the other hand, I think he is classic. At times he’s darkly funny. Others he is downright fucking terrifying, to me. Here he shows off a few more chops, as the Countess gives him an ultimatum, of sorts.
Donovan shows up at Ramona Royale’s place. He has an offering: the pornstar guy from the hotel. But she thinks Donovan is a big “pussy” in her words. Though, for all Donovan’s love for the Countess, and all the doubts Ramona may have, he actually seems to be against the Countess. He admits his “addiction” for her. Yet then Donovan claims he slipped enough ghb in her drink to “knock out an elephant.” He further admits he can’t “pull the trigger.” At least Ramona “appreciates a man who recognises his own weakness.” They seem together, toasting on the blood of the pornstar.
Another excellent flashback to Ramona in the ’90s, running back to her father (Henry G. Sanders) in L.A. Her mother (Marla Gibbs) and father helped straighten her out. Also, there’s sadness. Her parents are getting older, forgetting things, getting sick. Then her mother died and her father went further off the deep end in his mind. Such a tragic sequence, yet gives such an amazing depth to Ramona. There’s a break-in scenario and her father ends up getting hurt badly, which sees Ramona give the gift of the ancient virus to him. I saw this coming. I still found it effective, and beautiful in a sense. Eternally sad, though, as “a diseased brain is not a broken bone” and not everything can be fixed with vampirism. We see more and more how absolutely shattered inside Ramona is, having to effectively euthanize her own father so that he wouldn’t remain “frozen in amber.”
Alex Lowe is off doing her own thing, too. Not only serving up drinks for the Countess. She spies on a house, then makes her way inside only to find a bunch of dead, bloody corpses. Further in, there are a bunch of vampire kids with Max as the leader; remember, the kid from the hospital to whom she gave her blood? A few of the kids are getting sick, probably drinking bad blood. Earlier in the episode there was a news report about homeless people dead in the city: all the kids. Some of the kids don’t want to drink, they’re feeling worse and worse. They want Alex to help. Other kids are alive and thriving, one even saying they should “off them,” y’know – “all the sickies.” Such a creepy scene, evoking lots of the creepy children aesthetic. Makes things quite tense and eerie. The kids, most of them, don’t want anything to do with Alex. 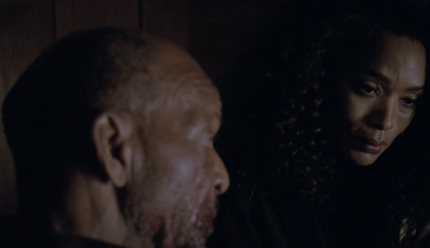 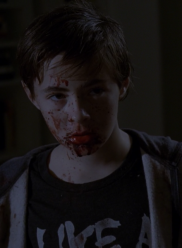 Back at the Hotel Cortez, Ramona and Donovan stand outside the Countess’ room, as she lays just inside sleeping on the bed.
Then a double cross, I think? The Countess wakes up before Ramona can sink a knife into her. Donovan tasers Ramona and takes her downstairs. Iris is upset about it all. Donovan is in love and he actually fell into the abyss, even though I imagined he was on the straight and narrow. Ramona ends up locked in one of those neon-lit cages. “You‘re weak. I should‘ve let you die,” Donovan tells his mother getting a slap in the face as a response. Where’s this going to lead Iris and Ramona now?
Rudolph and Countess are having drinks at the motel. Meanwhile, Natacha is off with her head full of “shopping and Uber.” I feel even worse for Donovan now because he’s fallen back for the Countess, while she’s still wrapped up in a time almost a century ago when she and Rudolph had their first great love. All the same, Rudolph hates the modern world. He is disgusted with everything in it, no “enchantment left” anywhere. Countess claims to hate the modern world even more than him and wants to turn the Cortez into a “fortress” against it. Still there’s Natacha to deal with. She loves everything out there. Somehow the Countess begins to try reeling her in, though. Sets up a girls night for them both without Rudie. Hmm.
And then, outside as she strolls away happily, there is Donovan. Will he finally see the light?
At the Cortez the wedding is about the be finished. Naturally, Liz objects with a hilarious quip: “Don‘t mind her. She drinks,” says the Countess. But the happy couple is proclaimed man and wife. The Countess wants to get the honeymoon started, so she plans to go get changed and get going. First, she gives over the flowers to Liz and gives off some nonsense about hoping she finds true love. Sad, to see Liz have to grin and bear it against this awful vampire of a woman.
Nice little meeting at the bar between Will Drake and James March. Very good stuff with James, having a little drink with Will in congratulations. “Here‘s to new worlds to conquer,” James toasts the newlywed gentleman. Even better is when March brings Will up to see Bartholomew in his black little crib. “What the hell is that thing?” Will draws back in terror after seeing the child-thing. Countess shows up and doesn’t like the “hateful things” Will has to say about little Bart: “I‘m going to make sure you suffer immensely,” she says before whacking him over the head.

Following this new development, Will finds himself down with Ramona. Only he’s on the floor while she stays locked up. But I’m sure he’ll be caged up right away, as soon as the Countess or March or whoever returns.
However, Drake doesn’t last long. He gets Ramona out, finds their in a sealed hallway, to which he quips: “Nobody knows we‘re in here. We‘ll starve.”
“I won‘t,” replies Ramona. She then pounces on him, starts to feast on his bloody neck. Miss Evers shows up to gloat, as the Countess watches on a screen up in her room comfortably. The end. 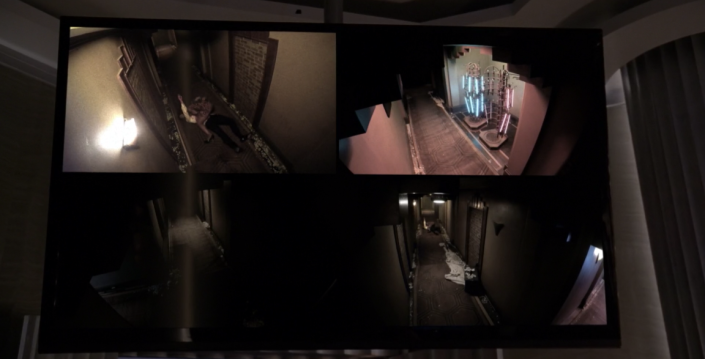 I’m interested to see who the she is in the next episode’s title, “She Gets Revenge”. Who will get it? Who will be revenged upon? Very exciting. Honestly, the haters can keep on hating this season. I’m digging it. Especially once we see more of John Lowe (Wes Bentley) next week. Curious to see where he goes now plot/character-wise after the revelation last episode that he is, for certain, the Ten Commandments Killer.
Stay tuned with me friends and fellow fans, more to come!