* For a review of the next episode, “The Run of His Life” – click here 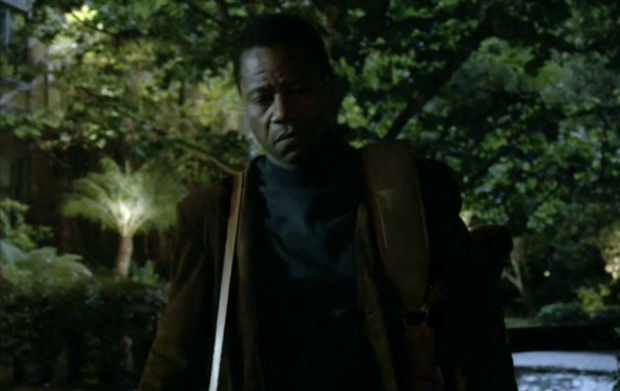 The series opens on video footage of the Watts Riots. Then there’s Rodney King himself uttering the famous “Why can’t we all just get along?” quote. Soon enough, we come to Los Angeles. Out from the door walks O.J. Simpson (Cuba Gooding Jr). He apologies to his driver for being a little late, needing a shower. They head off, as the driver is starstruck by his run-in with celebrity.
Cut back to an L.A. neighbourhood. A man walking his dog ends up stumbling across a murder scene. Back to the crime scene – Detective Mark Fuhrman (Steven Pasquale) looks around before Detective Phillip Van Atter (Michael McGrady) shows up to head the investigation. They head over to the Simpson residence where Fuhrman finds the now infamous white Ford Bronco pushed up against the curb; on the door is blood, inside a little more. The detectives rush to the house. In the backyard, a sort of creepy statue of O.J. stands tall, as they look on. Over at the guesthouse, Kato Kaelin (Billy Magnuseen) is strung out, barely making sense, but he points them in the direction of where he heard “loud bangs“, which he supposed to be an earthquake. Simultaneously, we cut to shots of O.J. being told about Nicole Brown’s death; at first it seems he isn’t that surprised, almost sounding fact. He sits on the edge of a bed and appears to weep – meanwhile, the detective on the phone with him, Dt. Lange (Chris Bauer) is suspicious because “he never asked how she died.“

Now we’re introduced to Marcia Clark (Sarah Paulson). She gets a call from Dt. Van Atter, who needs advice on the double homicide involving Simpson’s former wife. The law is mounting against O.J., and Clark seems as gung-ho as anybody else.
I love the look and feel of the show already. The cinematography is solid, as is the score; the music lies beneath each scene and sort of keeps you on edge, no matter which characters are in front of you.
The Simpson home, post-murders, is turning into a media hotspot. At the same time, Marcia is gearing up to start dealing with Van Atter’s case. They immediately begin a timeline on O.J. to determine exactly where he was at the time of the murders. Furthermore, they try to figure out motive as to why O.J. might have killed both Nicole and Ronald Goldman – either he walked in on them, or Goldman interrupted the murder of Nicole. Here, we also see some of the ‘oh how could he ever have done this’ which often dominates celebrity criminal cases. People become lost in the aura, the myth of a celebrity, stuck in the fame, and end up being blinded to what’s truly happened.
Robert Kardashian (David Schwimmer) tries to get access to the crime scene, saying O.J. is expecting him. Then the man himself arrives in a limo, his face unshaven, his eyes weary; he knows a battle is ahead of him. But does O.J. know it because he did it, or does he simply understand what’s about to happen? Police meet him and there’s something not quite right about the way Simpson reacts. Yet appearance isn’t everything.
A news camerman catches the actual arrest of O.J., cuffs and all, in the backyard sneaking around to get a clip. Van Atter shows up and uncuffs him, only needing him “detained“. Simpson makes clear he has nothing to hide, agreeing to cooperate. Then the camerman delivers his news to his colleague: “O.J‘s a suspect.”

Best yet, Johnnie Cochran (Courtney B. Vance) is introduced. First, he’s getting ready to look good for the day. His wife helps him out, suggesting purple. But Johnnie “don‘t wanna look like no grape.” He has a heated conversation with Christopher Darden (Sterling K. Brown) and they get very honest. Darden wants to quit, but Johnnie assures him: “The world needs more black men willingly to make a difference.” I enjoy seeing Cochran introduced before the trial and all that because we’ve got a chance to see bits of his character in advance.
Marcia Clark is disgusted with the system – Nicole Brown had been beaten up a bunch of times, O.J’s violent behaviour evident long ago. Her associate makes a hard point about how the police operate when it comes to famous people. However, now we’re going to see how they operate when it comes to black famous people, especially since murder is on the table. Then Marcia gets a listen of the interrogation tape when O.J. spoke with Van Atter. A timeline begins to come out, except it isn’t as concrete as Clark would like, giving O.J. plenty of opportunities to possibly change his story later. “He‘s the Juice,” Gil Garcetti (Bruce Greenwood) tells Marcia, as she tries figuring out how the questioning went so slack.

The family and friends of Simpson are rallying around him. A bit of a confrontation happens, on the sly, between O.J. and Kato; the latter lies about what he told the police, not telling them the two “had burgers” the night of the murders. Kardashian and Juice talk a little bit, but O.J. gets slightly upset because he keeps claiming his innocence. But there are lingering looks on the man’s face, which give up something else about what’s happening underneath the facade.
Out having dinner, Robert Shapiro (John Travolta) is schmoozing and having fun when O.J. reaches him on the telephone. Those who know of the trial will know who the man is before we’re formally given more on him.
Shapiro meets with Simpson and Kardashian. There’s talk of Johnny Carson, name dropping from Shapiro, but mostly he tries to make sure O.J. uses any expense at his disposal to get the job done. Naturally, like any good high quality lawyer would do. A private conversation between Juice and Shapiro sees the latter ask his client: “Did you do it?” To which the reply comes, fairly quick: “No. I loved her.” Clark and associates are busy compiling a timeline, bringing witnesses together. They’ve got a pretty damn good look at the events, so far. But I’m sure, like the real case, lots of twisty, turning nonsense will begin to get in the way.
While they’re pressing forward, O.J. is busy with his own situation, taking a lie detector test. He’s asked several questions before a whopper: “Is the person who killed Nicole Brown in this room?”, and all of a sudden O.J. isn’t answering so quick. The tester reveals a score of “minus 24“, “the worst you can do” as confirmed by Shapiro to Kardashian. This puts the fear and doubt in Robert’s eyes, even as he denies the fact O.J. could’ve killed Nicole. Back in the room with O.J., he is flipping out about the detector and it seems like the world is just falling down all around him at each turn.
The funeral for Nicole is underway. Kris Jenner (Selma Blair) and Faye Resnick (Connie Britton) talk about the abuse Nicole suffered at the hands of O.J., but this is factually untrue: supposedly, Jenner claims she didn’t know until the trial when evidence of these incidents were presented. Outside, O.J. tries to make it into the funeral with photos taken everywhere, people yelling at him, and many questioning why he’d bring his lawyer. The whole scene is intense, as Simpson walks in towards the casket, everything silent and the entire room watching on. One huge note: Cuba Gooding Jr has done an impressive job playing Simpson in this first episode, and I really cannot wait to see how he develops the character over the course of this series. Right now I am blown away. Plus, the technical aspects of American Crime Story makes everything better, capturing each scene, every look and glance with absolute perfection.
We get more of Marcia, too. She pretty much hangs up on her daughter after Van Atter and Lange show up with more information. Very telling. She values her job almost more than anything else in life. Can’t wait for the magnificent Paulson to flesh out Clark, as well. She is a fantastic actress and no doubt will provide the range necessary for the role.

The impending big arrest is coming. Shapiro sweats it out, as things do not look good for the Juice. Speaking of O.J., he’s sleeping over at Kardashian’s place, likely in one of the girls’ rooms; posters of Jonathan Taylor Thomas and other teen heartthrobs of the 90’s adorn the walls. They start to get Simpson ready for a physical exam, as he flips out more. Shapiro is still not sure about his new client, asking if there’s any last confessions needing to be made, but O.J. has no time for more of that. Doctors check him out while Shapiro and Kardashian each try to hold a steady face. The police are pissed, though, as Shapiro hasn’t brought Simpson down to the precinct yet. Stalling, I imagine.
Grand jury hearings begin now. Clark is questioning Kaelin, who won’t answer a thing clinging to the 5th Amendment. She then finds out O.J. hasn’t turned himself in yet.
And the finale of the episode comes with Simpson writing a letter in Robert’s office. In fact, he has written a will, a statement for his fans, a letter for his mother and another for his kids. All because he plans to kill himself. The gun comes out and Robert has to talk his friend down. O.J. even puts the gun right to his temple, his eyes filled with tears.
But Rob can’t get it done. Simpson runs off with the gun at his head, down to “Kimmy‘s bedroom” (little name drop for her). His friend keeps on trying to talk him down, just as A.C, a.k.a Al Cowlings (Malcolm-Jamal Warner) shows up to help.
A squad car arrives and two LAPD officers come to arrest the culprit. Only O.J. is gone, Rob is distraught. Everyone is gone crazy looking for him, but he is gone. So is the Bronco.

Next episode is aptly titled “The Run of His Life”, after the book of the same name. Get ready to see some of that famous footage we all saw back in the 90’s, as the white Bronco speeds away on the Los Angeles freeway. Stay tuned with me, folks. Loving this series already.