The bad dad is a staple of film. Often times we get emotionally charged representations of the bad dad whose heart is truly in the right place, yet can’t seem to make things for himself. These are the redemption stories, such as Mrs. Doubtfire and others; some can be hilarious like that Robin Williams classic, different movies can go for a much more dramatic, intense feel. The Fan tells the tale of a down-and-out baseball superfan whose ambition never took him anywhere except into mediocrity and a divorce from his wife, so he places all his chips in life on trying to be a good dad. Only the dad here is more concerned with watching baseball than actually caring for his son. More than that, we combine the bad dad redemption story with a thriller about a fan gone mad.
Tony Scott was an interesting director. His visual style is flashy, though, it contains substance. Most interesting here is that The Fan takes on the popular culture surrounding baseball. Scott’s quick-paced style, his MTV-generation editing, all these techniques lend themselves to a movie focusing on celebrity, fame, obsession. There are many different aspects to the main character Gil, the titular obsessive fan, and one of those is that he’s very much a specifically American product.
Not in any way speaking bad about America, but Gil becomes the epitome of the television era, the generation of people who first grew up with the television and experienced how popular culture fed through the airwaves. What this movie does best is examine obsession and fandom can become dangerous if it’s all a person has, and if the rest of their life fades away into being a fan, into their obsession, then their world becomes a much more dangerous, more volatile place.

Gil Renard (Robert De Niro) is a salesman – hunting knives. He’s also possibly the world’s biggest San Francisco Giants. So when big time celebrity ball player Bobby Rayburn (Wesley Snipes) is signed, for a ridiculously huge contract, Gil is beyond ecstatic. He even gets to talk to Bobby after calling in live to a radio show hosted by Jewel Stern (Ellen Barkin).
But Gil’s got bigger things to worry about. His ex-wife Ellen (Patti D’Arbanville) lives with Tim (Chris Mulkey), who is clearly a better influence on their little boy Richie (Andrew J. Ferchland). Gil tries to impress Richie, but only manages to make things worse after leaving him alone in the Giants stadium during a game. All due to his obsession with baseball and Bobby Rayburn that gets in the way of Gil doing his job properly.
Meanwhile, Bobby and his agent Manny (John Leguizamo) try turning things around, after a rough start upon the star player’s arrival in San Fran.
Everything turns ugly when Gil decides to insert himself into a feud over jersey numbers between Bobby and his teammate Juan Primo (Benicio Del Toro). That is, Gil does so without Bobby knowing. And after Juan turns up dead, the life of Bobby Rayburn only gets scarier with Gil Renard in it. 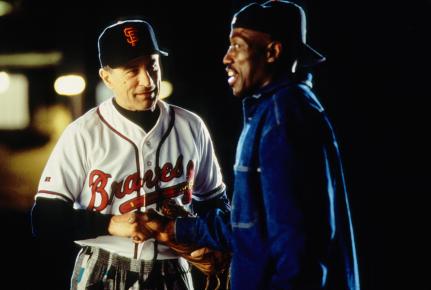 Not much redemptive in Gil as a character. He’s childish, has a major temper. And bottom line, Gil believes he cares about his son, but just doesn’t really. Or he does not put enough effort in. Like everything in his life – the effort is not there. He’s too concerned with baseball. Gil can’t even suck up to his son for doing something wrong without ego getting in the way; he brings the boy a pizza, but puts mushrooms on it and what kid likes mushrooms? He tells his son to pick them off. It’s one of those tiny, subtle moments where we see just how little Gil thinks, and how little effort goes into his parenthood. I imagine he is a man who never grew up, for once reason or another. His mind never matured from a child’s – obsessed with baseball, with the dreams which once were big and bright and in his future but now only remain as reminders of a wasted life.

Examining Gil, we start to look at how fans interact with their celebrity obsessions. Funny enough, in 2016 this film might even have further relevance. Bobby Rayburn and Gil have their fateful encounter here, but imagine if this were made in the age of Twitter? The closer interaction between celebrities and fans heightens the possibilities of stalking, of obsessively unhealthy behaviours, and so on. Here, we see how Rayburn’s generous attitude towards a fan leads into a vortex of insanity. Furthermore, there’s also an examination of celebrity when it comes to Rayburn in this picture. His situation goes to show how fans can easily turn on the objects of their affection, such is the case when Bobby doesn’t hit so well; he’s the hero while hitting home runs, the villain when he is not.
So in a sick way, Gil also represents the true fan – willing to literally kill in order to try and boost his favourite player, to feed his morale and put him back on top of his game. Overall, Scott’s film gets at the heart of what fame and celebrity mean to those obsessed, the fans. It’s hyperbole, yes, but great hyperbole. The love of the fan translates into violence when the love is not returned. And in a sense, Gil is the story of unrequited love. Both in the sense of his inability to return the love of his son, as well as the love he shows to Bobby, the other heroic sports figure of his life. Gil’s the ultimate worst disaster of a fan anybody could ever imagine, as his fandom and reverence of Bobby is one in the long line of many, most likely. Look at his obsession with Jagger and the Stones! Who knows when he started recounting all those little tales. And why Mick? Why the Stones? Such a huge band and he acts as if they were best friends. Probably went to some shows and believed Mick and Keith were looking at him.
He’s really trying to find that father figure that’s clearly eluded him for a lifetime.So that’s it: The Fan is about a dangerous abyss, which being a huge fan like Gil skirts around (and in his case goes over), that a person can fall into if they use their obsession as their only route into the world. Being a fan can be perfectly normal. But, as evidenced via Gil, it can get excessively maddening. 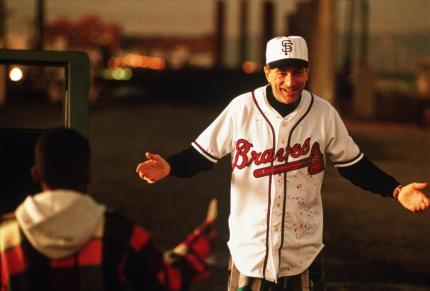 De Niro is excellent here. There’s a creepiness about him that he can draw out, but also a terrifying side. He has this sort of middle class charm about him, too. The way Gil initiates people is normal. Then slowly his wobbly mental health rears its head, except when he talks about baseball. And it’s this utter obsession De Niro shows us, as Gil wavers fluidly between poles – happy and manically expressing his love for the sport of baseball, to rage-filled and pouring out the years of bottled reserved anger in him onto others using insults, then later those knives he loves selling. So while there’s definitely lots of over-the-top stuff in this movie, De Niro sells the Gil character every bit. He and Snipes are fun together. You can see Snipes enjoys to play off De Niro, which works. They’re a grim team as the horror of their doomed relationship unfolds. Plus, there’s the charismatic presence of Snipes as is, and that brings a star quality to his character; he walks and talks like he is the man, knowing it at every moment. Also there’s a second side to him, as well. Snipes shows us the vulnerable side of stardom, something he most definitely understands. So his performance is undervalued here. He has a certain prowess for the big ego character that oozes out of every scene.

This Tony Scott film is a 4-star thriller. Definitely does not receive the credit it deserves. Looking back, it’s likely because things go really wild and out there with the finale. I’ll definitely concede on my enjoyment of The Fan there; not a good way to close things out. Maybe some of the other bits are over-the-top. Mostly, the fact there wasn’t a bit more of the novel used than ended up in the final products damages the character development. However, as I said, De Niro gives a solid performance, and that helps bring us closer to Gil Renard’s madness. Scott’s unique style of directing makes this a purely American story of obsession, a dissection of fame through the lens of a crazy man.
The movie can be abrasive and hard to swallow at times simply because of the relentless unapologetic portrayal/writing of Gil. But Scott makes this an interesting story revolving around the obsession of one fan gone totally wrong. Deserves another watch and a closer look by many. Flawed movie that still works, pushing a message about concerning ourselves too much with celebrity and fame.