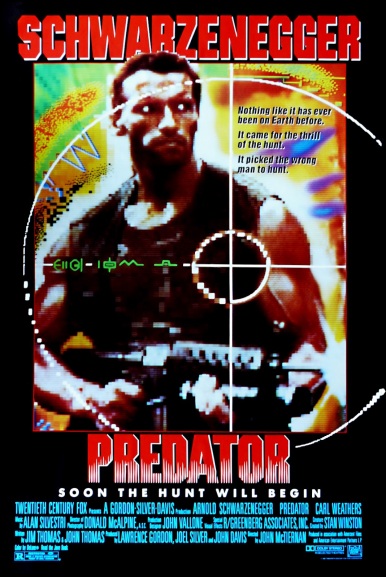 There are 1980s films. Then there are quintessential ’80s films. Such is the case with Predator. It boasts one of those awesome casts that makes things work incredibly well, mostly due to the fact Arnold Schwarzenegger, Carl Weathers, and Jesse Ventura are each enjoyable to see on camera; but they’re just the icing on the cake. The writing has got plenty of that ’80s charm with cheesy one-liners that would never survive outside the decade (“I ain‘t got time to bleed“). There’s a ton of kick ass action that spreads from science fiction to horror in the one breath. And it’s the sci-fi aspect that’s so damn fun.
Director John McTiernan has given audiences a good helping of action in the course of his career. He’s made Die Hard and Die Hard: With a Vengeance, as well as The Hunt for Red October, and also the criminally underrated adaptation of Michael Crichton’s The 13th Warrior. But above it all reigns this 1987 science fiction action-horror masterpiece. Playing on a collective fear of the unknown re: intelligent life out in space, McTiernan’s Predator puts a bunch of military men in the way of the titular intergalactic hunters, pitting the toughest of the tough against an entity far scarier, far more nasty than any of them. 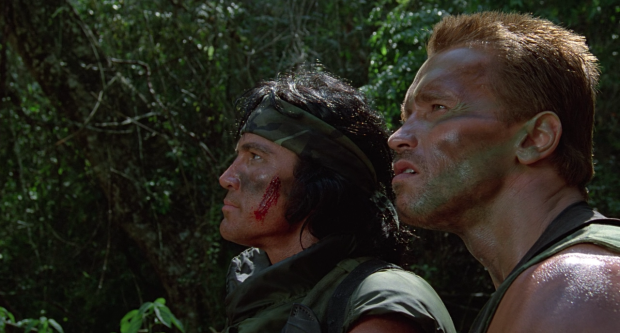 Our first glimpse of the Predator’s thermal vision scanner is actually chilling. It has this starkly contrasted feeling, and the sounds, the thumping of the heartbeats, makes things even more unsettling. Best of all, the men don’t know they’re being watched. So the voyeurism of this Predator as he susses out the group and their possible weaknesses is a scary element. He watches, waits, stalks. They are his prey. Quickly, we’re introduced to the abilities of this space hunter and the advantages his technology give him.
And that leads into part of why I love Predator. If you’re the kind that likes reading deep into a film, even if it’s action, then let’s get going! See, to my mind, the idea of these Predators out there, coming from another planet and meeting head-on with these military men, the mercenary-types, it speaks to the uniquely American fear of being conquered. Being dominated. Being bent to the will of a power stronger than oneself. The idea that these super hunters could go up against our best, the military-trained men with every skill for battle imaginable, this shatters any notion of superiority.
Then again, it’s just a movie about an alien killing a bunch of dudes, right? 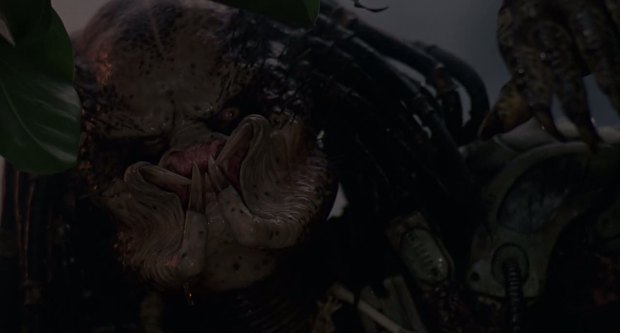 Setting this in the jungle was a stroke of genius. The locations look absolutely incredible. Much of the cinematography in general is pretty good, too. Donald McAlpine does a solid job capturing different aspects of the film – from the horror to the action to the more sci-fi elements. He takes us from the action oriented battles to the close-up, fearful conversations of the men as they hide in the bush from the Predator. The suspense is always present. The horror always just around the corner. Together with McAlpine is the talented composed Alan Silvestri, whose music can be heard in everything from Who Framed Roger Rabbit to Forrest Gump to The Avengers. His score really amps up the energy,  the suspense, and breaks the tension in all the right places. The orchestral score flares up in wild moments of action. Its strings lay just beneath the conversations of the men as they try and figure out how to proceed against their unseen threat. Adding McAlpine’s cinematography with the downright fucking amazing score out of Silvestri, all the genre elements are aided with a thick atmosphere of dread and uncertainty. 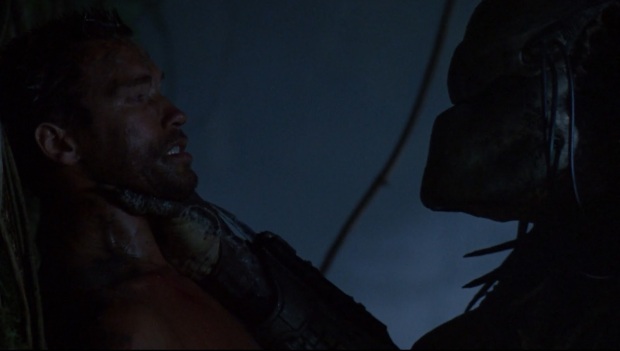 On one hand, Arnold is not a good actor; at all. On the other, he is a great action star. Contradiction? Nah. He’s got the looks, the big hulking frame and muscles, there is a quiet intensity about him almost all the time. He’s got charisma, his charm is undeniable. Plus, he can do the action, he can perform some stunts and give authenticity to the term ‘action star’. So who better to lead Predator? In addition to Ahh-nold, we’re also given some Carl Weathers, whose performance is fairly enjoyable. Then Jesse The Body – he pops off a truly hilarious and unfortunately homophobic line early on, but makes up for it with typical ’80s nonsense dialogue that’s so perfect to keep things fun. The cast was never going to win any Oscars. Although, they work well as an ensemble, they’re all pretty ripped which lends itself to their being military men and hardcore mercenaries, so that’s the best McTiernan needed for the action and the thrills provided.

Excitement. Suspense. Greasy biceps. Blood. Brutal alien killers. Arnold covered in mud, kicking a little alien ass. Predator is a big 4-star action extravaganza. It has the right amount of everything to make this one of the best of the 1980s. The science fiction and horror aspects of the screenplay really helped this become a favourite amongst fans. Because action movies are meant to be Rated R. So why not give fans of the sci-fi and horror genres a dose of action they can enjoy? Turns out, everyone enjoyed it.
For all its flaws and missteps, Predator‘s appeal is undeniable, it is long lasting, and as long as there are action-science fiction hybrids, this will remain a proven classic.