Paul Thomas Anderson is the best filmmaker of his generation. There are tons of other writer-directors I admire, to the fullest. However, he stands atop that pyramid. Time and time again his films captivate me in genuine ways others do not. I’ve followed his career closely since initially seeing Magnolia, then going back to Hard Eight and moving on forward again. His work as a director is astonishing, as Anderson cobbled together his own style through watching the cinema others produced, learning the craft through seeing it in motion. With equal parts Stanley Kubrick influence and that of Robert Altman as well, Anderson makes movies in an epic style while also managing to keep complete focus on the humanity at the core of his characters and the plethora of stories he tells. His earlier work is dominated much more by the Altman-esque sensibilities of his talent. Starting with There Will Be Blood, he’s transitioned into his more Kubrick inspired work.

The Master is at once an unauthorised, fictional version of the life of L. Ron Hubbard, and also the story of two men locked in a love they’ll never fully express; not in this life, anyways. Perhaps the next. And then there’s also the fact this film speaks to that Scientology influence without directly condemning and shaming their beliefs (no matter how crazy they are). Anderson questions what is at the heart of faith: could it simply be the searching of the lost for love and comfort? Who knows.
Throughout the film a Navy veteran out of WWII named Freddie Quell (Joaquin Phoenix) finds himself in the midst of The Cause, a group on the verge of being a full fledged cult run by Lancaster Dodd (Philip Seymour Hoffman), affectionately known as The Master. What follows is a story that touches on belief, duty, love, war, and much more.

After WWII, there was this search for a new meaning to masculinity. In peace time there must be a redefinition of what it is to be masculine. How does a man pushed to kill for his country come back home to that very country and simply… exist? On the Blu ray Special Edition of The Master the 1946 documentary Let There Be Light directed by John Huston is included. This is the catalyst for Anderson’s film. The opening scene is essentially directly from that documentary, as men are interviewed just like Freddie about various psychological elements. One thing the V.As all hear is that people will not understand, and it’s quite possible they might even find their “condition” shameful, so on. So that violent outburst we see from Freddie as he tries to work a normal job taking photos in a department store is merely the aggressive, wartime side of him fighting to survive. Like a delayed reaction or a motor that’s only recently been shut down, it takes time for that aggression to work itself out. Maybe it never does. But that’s why Freddie is almost the perfect test for someone like Dodd, coming along after the Second World War and likely still filled with hate for the enemy. He challenges that “inherent state of perfect” which Dodd refers to in his teachings.

There’s a significance to seeing the beginning V.A. scenes with the doctor and Freddie in juxtaposition with Freddie being ‘processed’ by Dodd. On a simple visual level, there are certain frames where they sit across from one another similarly in each scene; the doctor and Dodd appear on one side of the frame, as Phoenix often remains on the other. Above that there’s the fact Freddie is always searching for a master. Just so happens he ends up finding The Master, Lancaster Dodd, head of The Cause. But before that it was the army; in those beginning scenes, the V.A. Doctor is an extension of the army, and a master in his own right.
Moreover, the questions aren’t so dissimilar between Dodd and the doctor, as they each come at Freddie from a psychological standpoint. And finally, it’s the parallel of real science, real psychology versus the fake, pseudo-religious Scientology-like madness Dodd is spinning. So at once there’s a ton of different elements at play all in these two scenes put together. 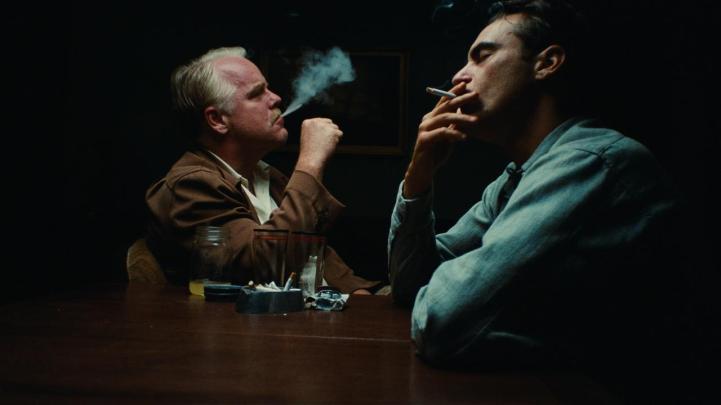 One of the final scenes has Lancaster singing to Freddie, the song “(I’d Like to Get You on a) Slow Boat to China”, and it calls to mind an earlier moment. When Freddie is first ‘processed’ by Dodd he remembers the girl named Doris he left behind at home, the love of his life. She also sings to him “Don’t Sit Under the Apple Tree”. Now what I find interesting is obviously that they’re both romantic songs. And they’re both sung in scenes that precede a farewell, a final goodbye. But the longing in both scenes from Doris and Dodd respectively is evident, which reveals a good deal. It’s obvious before that Dodd and Freddie have a special relationship. I’m not saying that it’s full-on homosexual. However, they do love one another, and on a level of understanding.

The duality of man: Freddie and Lancaster are two sides of a coin, the Split Saber, which is of course Dodd’s own title for his second book that comes furiously from his own hand after Freddie arrives on the boat and in his life. During certain moments the animal in Lancaster comes out, the one whose world of which he vehemently denies man is a part. For instance, when challenged by an insistent man at a party Dodd bursts out calling him “pig fuck” in front of the entire room while trying to defend his position. So of course we see it immediately as his breaking in front of people and unable to appropriately explain/defend The Cause (because it’s all bullshit). Though it’s more. It is that beast in Dodd that wants to live out in the world. In turn, that beast in him unable to unleash lives in Freddie, which is a large part of why he’s drawn to the man.

Ultimately, I do feel Dodd is a closeted homosexual. That’s my call. I don’t think Freddie necessarily is, though he seeks great comfort in Dodd, and most certainly cares for the man deeply. But the scene where Peggy jerks her husband off in the bathroom over the sink is telling. They don’t make love, even though she is pregnant. They don’t even lay down in bed or get comfortable. It’s something that’s got to be done, like milking a cow, or doing any other chore. She also tells him to give up on certain ideas, that it “didn‘t work for them and it‘s not going to work for you“, and then advises him not to drink anymore of Freddie’s hooch. On the opposite side, Freddie is a lost man. He can’t seem to really connect with women well enough, other than physically, to form a relationship, at least one that he doesn’t abandon. His relationship with women is problematic at best, as we see immediately on the beach during his tour of duty where he and other men build a woman in the sand; one he proceeds to finger bang and pretend-fuck in front of everybody, all before masturbating furiously into the ocean. So there’s a form of homosexual love on Freddie’s part towards Dodd, too. It’s out of a need, a necessity. He has to have that master, someone to control and guide him. On ther other side Dodd requires somebody to indulge the animalistic nature in him.

In the end this is one of the strongest messages I see in The Master: religious groups such as The Cause are built by emotionally fragile people seeking the comfort in numbers among the fragility of others, so it’s basically the lost leading the lost. This further perpetuates others that are lost looking for a home and a place of comfort to end up further adrift.

Philip Seymour Hoffman is fantastic here. He embodies The Master well and takes us to the serious side of a man whose mental stability is questionable. All the same, he makes the man believable, very strong. A great performance. Opposite him Joaquin Phoenix gives what might be the single best performance of his entire career. He actually physically embodies Freddie to the point you can see how he formed the walk, the way he stands, his entire look. A remarkable role and Phoenix just downright nails it. Some of the scenes between Hoffman and Phoenix are beyond intense, especially the quiet, closed in moments where it’s just the two of them like the processing early on, et cetera. These two have wild chemistry. Love the scene of them in jail – everything about it is perfect, the angle at which Anderson catches them, the intensity of their conversation, we even see Lancaster slip more into his animal behaviour and just hurl curses and insults at Freddie.

Jonny Greenwood of Radiohead fame comes back with Anderson again to do another innovative, unique sounding score. His compositions here are downright magical, as they float and hum and burn below the drama. It really is wonderful stuff. At times there’s this gorgeously flowing orchestral music. In other scenes Greenwood employs some of the ole Radiohead weirdness, as he did with portions of There Will Be Blood. It works even better in this film because the strange atmosphere of the music mirrors lots of the oddities in Anderson’s screenplay. They are a solid team together as artists, likely why Anderson has done other work with Radiohead and Greenwood.

Cinematographer Mihai Malaimare Jr. captures the vision of Anderson perfectly with his full, rich lens. Between Malaimare and Anderson the flow of each scene is intense. Certain scenes are blocked with great care and attention. Others it’s simply the fact Malaimare captures every last raw emotion in the faces of the characters. The period is likewise captured elegantly. Also the boat and most of the locations were great settings. When a film that’s written and directed well, filmed well, is also a properly rounded production in terms of set/costume design (and other areas) then it’s altogether an amazing experience.

A masterpiece. Paul Thomas Anderson proves over and over he does well with period pieces, no matter if it’s late 1800s, mid-1970s, or any other time. He can turn period pieces into more than just spectacle. Within those he works over the human emotions to an endless degree. Here, his exploration of a forbidden and powerful love between two men is disguised amongst a larger story about belief and faith, fringe religious groups (a.k.a cults), as well as the power of one person over another, for various reasons.

The two powerhouse performances of Hoffman and Phoenix are something spectacular to behold. They make this film even better for their presence in it. Anderson will continue to make beautiful cinema, and this will likely always be a favourite of mine out of his filmography. The Master moves me, emotionally and visually, to the point I can watch this endlessly.